In Recent Years, the Region Has Become a Base for Violent Extremists and Those Fighting Them 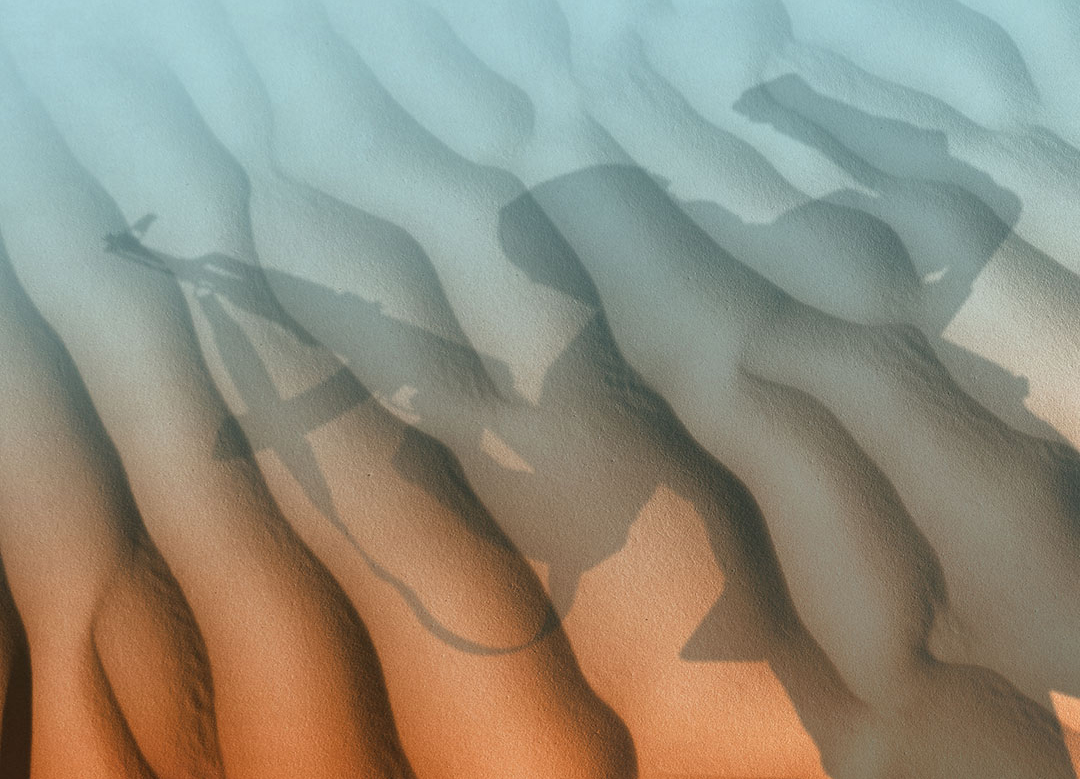 The Sahel, a semiarid region stretching from Senegal on the Atlantic coast to Eritrea and the Red Sea, has been a dividing line in Africa for centuries.

It separates the Sahara to the north from lusher savannahs to the south and stretches 5,408 kilometers and covers 3,053,210 square kilometers. Its terrain includes plateaus and mountain ranges, grasslands and shrublands. There is little surface water.

The region stays mostly hot and dry year-round with winds and sparse rainfall, usually no more than 200 to 600 millimeters between May and September. Even then, most rain falls in its southern extremes.

As populations grew in the Sahel in the latter half of the 20th century, erosion and desertification increased. Farmers and townspeople began to fell trees and shrubs for firewood and clear land for crops. Livestock chewed away the remaining grass cover. Runoff from rain swept away top soils, leaving behind arid and barren land.

Culturally, the Sahel marks a transition from North Africa, which historically has been aligned with the Middle East in terms of language, ethnicity and religion. The nomadic peoples of the Sahara and northern Sahel stand in stark contrast to the more stationary societies in the Sub-Saharan region. Sahel countries such as Mali and Niger have vast, ungoverned spaces in which Islamic nomadic Tuaregs roam.

Terrain, climate, culture, religion, ethnicity, history, tradition — the Sahel serves as a transitional boundary for them all. Along that line is strung an array of security challenges that find African and international security forces confronting militants and terrorists from Mali to Chad. 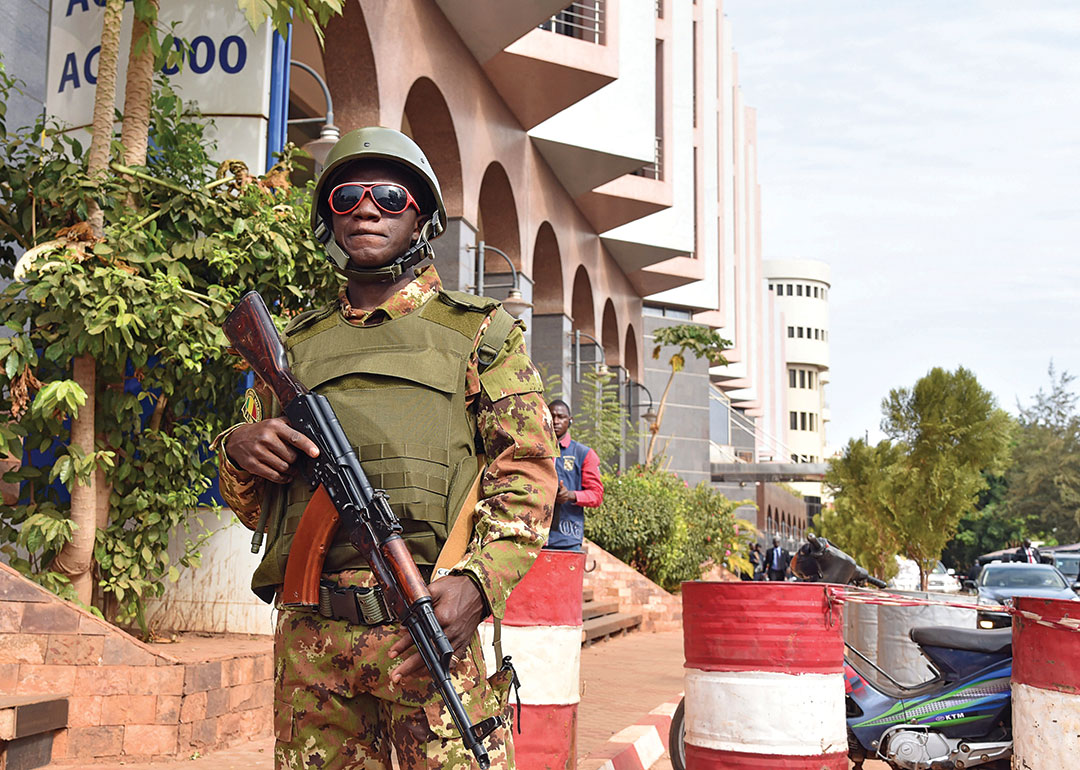 The geography of Sahelian nations and the remoteness of their capitals and large cities leaves large swaths of territory essentially ungoverned. Such is the case in Chad, Mali, Mauritania and Niger.

In some cases, particularly regarding Mali and Niger, national boundaries separate culturally and ethnically similar groups. The borders of Burkina Faso, Mali and Niger are a hotbed of extremist activity in the Sahel.

Several extremist groups make their home in the Sahel. Many of those have morphed and merged with others, aligning themselves with larger, global terrorist groups. The most prominent — past and present — are listed below. Descriptions of these groups were drawn largely from research by the Africa Center for Strategic Studies.

JAMA’AT NUSRAT AL-ISLAM WAL-MUSLIMIN (JNIM) — Formed in March 2017, JNIM is a coalition of several militant groups: Ansar al-Dine, Macina Liberation Front, Katiba Serma, AQIM Sahara and Al Mourabitoun. Ansar al-Dine’s leader, Iyad Ag Ghaly, assumed leadership of the coalition. The group, whose name means “Group for the Support of Islam and Muslims,” intends to expel non-Muslim “occupiers” from West Africa, particularly French forces and participants in the United Nations peacekeeping mission in Mali. JNIM adheres to Salafist Islamic teachings and wants to bring the region under Shariah. The group is part of al-Qaida’s network and had between 1,000 and 2,000 fighters as of September 2018, according to the Center for Strategic and International Studies. The group is most active in Mali, waging attacks from Bamako to as far north as Taoudenni. It also has attacked in Burkina Faso and Niger.

ANSAR AL-DINE — Iyad Ag Ghaly founded the group in November 2011 after he failed to become leader of the National Movement for the Liberation of Azawad (MNLA), which pushed for secession from Mali in 2012. The Islamic militant Tuareg group operates in the region around Kidal. The Salafist group, whose name means “Defenders of the Faith,” was among the affiliated organizations that took over northern Mali in March 2012 after a military coup, according to Stanford University’s Center for International Security and Cooperation. In July 2012, Ansar al-Dine made headlines when it destroyed seven mausoleums honoring Sufi saints in Timbuktu, claiming that the shrines were idolatrous. When operating, the group was thought to have between 100 and 1,000 members.

MACINA LIBERATION FRONT (FLM) — Amadou Koufa founded the group, which operates in the Mopti region, in 2015. FLM, also known as Katiba Macina, claimed it would try to “reinstall the Islamic Macina Republic,” a reference to the Macina Empire, a theocratic society that lasted from 1818 to 1863 in Mali’s Mopti, Ségou and Timbuktu regions, according to the Africa Center for Strategic Studies (ACSS). The empire primarily was composed of ethnic Fulanis, and it applied Islamic rule. The FLM uses this historical narrative in hopes of gaining popular support to take over central Mali. Some believe the group includes former members of the Movement for Oneness and Jihad in West Africa.

MOVEMENT FOR ONENESS AND JIHAD IN WEST AFRICA (MUJAO) — Ahmed el-Tilemsi and Hamad el-Khairy formed MUJAO in 2011, splitting it off from AQIM. MUJAO announced itself by kidnapping three European aid workers in Tindoug, Algeria, in October 2011, according to Stanford. MUJAO, composed mostly of Tuaregs, wanted to establish Shariah in the region. During the 2012 Malian crisis, MUJAO occupied the area around Gao. About a year later, the group merged with the Al Mulathamun Battalion and formed Al Mourabitoun. It is possible that a few MUJAO fighters still operate under that name.

KATIBA SERMA — The group is a semi-autonomous arm of the FLM and is led by Abu Jalil al Fulani, according to ACSS. It operates in the Serma region between Gao and Mopti.

AL-QAIDA IN THE ISLAMIC MAGHREB (AQIM) — This group has its roots in the Algerian Civil War. It sprang from the Armed Islamic Group (GIA), which participated in the war, in 1998. When it emerged from the GIA, it was called the Salafist Group for Preaching and Combat. The name changed to AQIM in 2006 when it formally aligned itself with the global terrorist organization. AQIM is active in the trafficking of drugs, weapons and humans, and it often has kidnapped Westerners for ransom. In 2017, the group’s Sahara branch merged with Al Mourabitoun, Ansar al-Dine, the Macina Liberation Front and Katiba Serma to form JNIM.

AQIM SAHARA — This is al-Qaida in the Islamic Maghreb’s branch in Mali and the southwest corner of Niger. It once was led by Djamel Okacha (also known as Yahya Abu al Hammam), who is now dead.

AL MOURABITOUN — The name means “The Sentinels.” The group formed in August 2013 after the merger of MUJAO and the Al Mulathamun Battalion. It operates in Mali, primarily around Gao, and pledged its allegiance to al-Qaida in mid-2015. Its aim is to establish Shariah, unite Muslims and attack Westerners in North Africa, according to Stanford. Despite flirtations with the Islamic State, the group stayed allied with al-Qaida, although operating with autonomy. In early 2017, Al Mourabitoun merged to form JNIM. One estimate, from 2014, put the number of fighters at 100.

ANSAROUL ISLAM — Malaam Ibrahim Dicko, now deceased, founded the group in 2016. It is based in Burkina Faso’s Soum province, which borders southern Mali. The jihadi group is the first such organization to arise in Burkina Faso, which before had seen no significant militant jihadi violence. Ansaroul Islam announced its formation after attacking a Burkinabé-French military camp in December 2016, according to Stanford. The group, which operates mostly in Burkina Faso and Mali, seeks to rebuild Djeelgodji, an ancient Fulani empire that ended after French colonization in the 1800s. Its targets include civilians, French counterterrorism forces and Burkinabé security personnel. It is thought to have no more than a few hundred active fighters now. 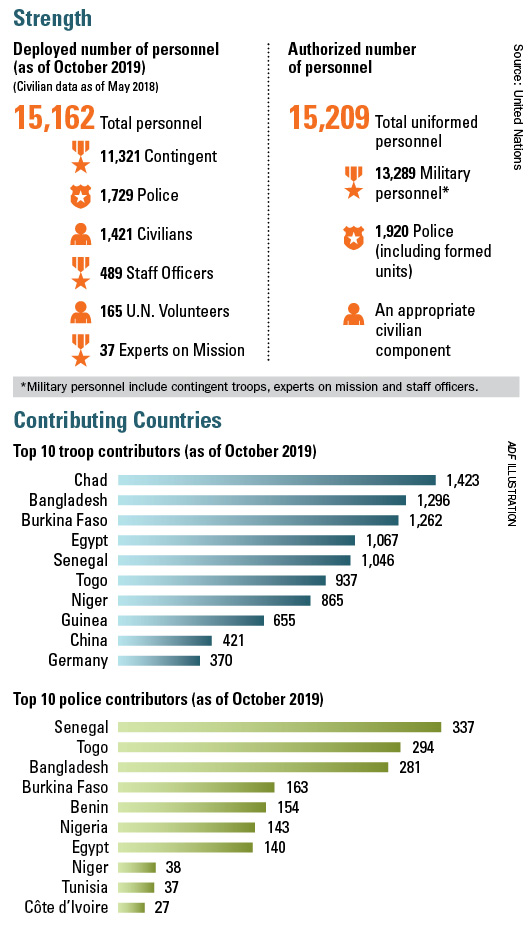 ISLAMIC STATE IN THE GREATER SAHARA (ISGS) — The group operates in Burkina Faso, Mali and Niger. It broke off from Al Mourabitoun in May 2015 when Adnan Abu Walid al-Sahrawi swore allegiance to the Islamic State and its leader, Abu Bakr al-Baghdadi, who died during a United States assault in October 2019. Although ISGS is recognized as an affiliate, the breadth of its support is not clear, according to Stanford. Among the group’s Sahel attacks was the ambush that killed four U.S. Green Berets and several Nigerien Soldiers in October 2017. For about two years now, the group has clashed repeatedly with French forces and its allies under Operation Barkhane. ISGS was estimated to have 60 core members in 2018.

KATIBA SALAHEDDINE — Sultan Ould Badi, a former member of AQIM and co-founder of MUJAO, founded the group in 2011. In 2016, Badi allied himself with ISGS’ al-Sahrawi, a colleague from his days with MUJAO.

UNAFFILIATED — Some militant groups either could not or have chosen not to claim responsibility for attacks.

UNITED NATIONS MULTIDIMENSIONAL INTEGRATED STABILIZATION MISSION IN MALI (MINUSMA): In January 2012, the Tuareg National Movement for the Liberation of Azawad (MNLA) joined with Islamic armed groups Ansar al-Dine, al-Qaida in the Islamic Maghreb (AQIM) and the Movement for Oneness and Jihad in West Africa (MUJAO), as well as deserters from the Malian Armed Forces. Rebels attacked government forces in northern Mali and were bolstered by combatants coming in from Libya, whose regime had just fallen.

In March 2012, soldiers from units defeated in the north led a coup, which accelerated the state’s collapse there. Soon, extremists controlled Gao, Kidal and Timbuktu. Ansar al-Dine and MUJAO had driven MNLA out of the area.

To restore order, the Economic Community of West African States organized the African-led International Support Mission to Mali to back the government against extemists. In April 2013, the United Nations Security Council established MINUSMA and took over.

OPERATION BARKHANE: This French-led military intervention came after Operation Serval in August 2014. Unlike Serval, which was limited to Mali, Barkhane battles militants across the Sahel. Up to 4,500 Soldiers are deployed in Burkina Faso, Chad, Mali and Niger with headquarters in N’Djamena, Chad, according to the European Council on Foreign Relations. Aircraft and intelligence bases are in Agadez, Arlit, Niamey and Tillabéry, Niger, and there are troops in central and northern Mali. Barkhane is named for a crescent-shaped dune found in the Sahara.

G5 SAHEL JOINT FORCE: The G5 Sahel started in 2014 to foster economic cooperation and security among Burkina Faso, Chad, Mali, Mauritania and Niger. In 2017, the alliance launched its joint security force to address terrorism, drug trafficking and human trafficking. The force, when fully operational, will consist of 5,000 personnel, mostly troops with some police officers and gendarmes. Personnel will be stationed across three sectors: the Western, in Mali and Mauritania; Central, in Burkina Faso, Mali and Niger; and the Eastern, in Chad and Niger. The force headquarters began in Sévaré, Mali, but was moved to Bamako, Mali, after a June 2018 bomb attack. Each sector will have a secondary command post.

The force will focus on border zones. One zone will cover the Mali-Niger border, and one will oversee the Mail-Mauritania border. The third will provide security in the tri-border area where Burkina Faso, Mali and Niger meet.

Alpha Barry, Burkina Faso’s minister of Foreign Affairs and International Cooperation, told the U.N. Security Council on May 16, 2019, that the Joint Force is 90% operational in the West, 74% in the Central region and 75% in the East. As of that time, the force had undertaken seven operations on human rights and humanitarian law.

EUROPEAN UNION TRAINING MISSION IN MALI (EUTM MALI): The mission, which began in 2013, is made up of almost 600 Soldiers from 22 EU members and five nonmember states. The EU’s military strategy in Mali also addresses humanitarian and political development. It bolsters the capacity of the Malian Armed Forces so that it can defend the country. EUTM Mali trains and advises the Malian military, improves the military education system, and advises G5 Sahel Joint Force headquarters personnel.

EU CAPACITY BUILDING MISSION IN THE SAHEL (EUCAP SAHEL MALI): This civilian mission, launched in April 2014, advises and trains Mali’s gendarmerie, police, national guard and associated ministries. As of late 2018, the mission also was advising and training personnel in Burkina Faso, Chad, Mauritania and Niger. Mission headquarters in Bamako, Mali, has up to 200 local and international agents.