Nigerien Military Lends Hand to Those in Need 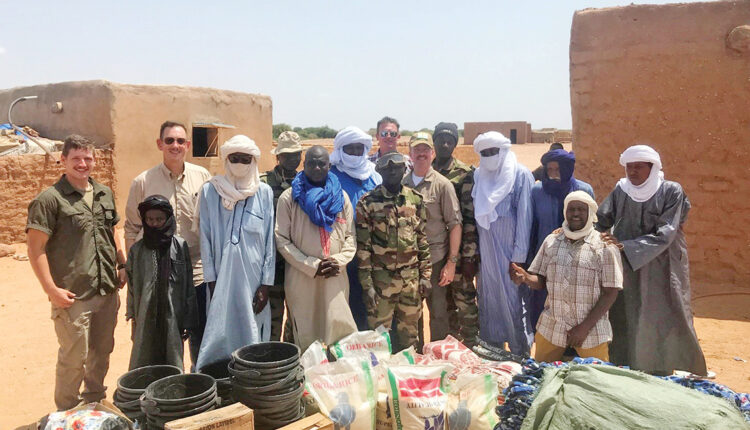 Niger’s military has launched a program to improve the lives of citizens living in the Agadez region surrounding Nigerien Air Base 201, a United States drone air base.

The newly created Action Civil-Militaire (ACM) division of the Forces Armées Nigeriennes (FAN) is conducting humanitarian aid missions. The division has conducted its missions in conjunction with U.S. Civil Affairs teams stationed at the base.

Under the program, ACM members select villages to receive aid and execute each mission supported by U.S. Civil Affairs. A separate ACM unit is performing similar missions out of Nigerien Air Base 101 in Niamey, the nation’s capital.

In May 2021, an Air Base 201 ACM mission to Beital, 30 kilometers north of the base, provided residents with 3,000 kilograms of rice, 120 mats and 120 buckets. A September mission to Teghazert, 8 kilometers east of the base, coincided with the celebration of the community choosing a new chief. The ACM gave the community footballs, rice, prayer mats, buckets, soap and mosquito netting.

The commanders of Defense Zone 2 and Air Base 201 praised the careful planning and execution of the ACM operations.

“We are incredibly pleased with how smoothly the logistics and communications went as the mission progressed, allowing us to aid our fellow countrymen in need,” said Nigerien Capt. Badage Oumarou, the base commander.

An estimated 4,200 residents of the Agadez region have benefited from the ACM humanitarian missions.

“The Nigerien ACM team is an impressive group of people who genuinely want to help their fellow countrymen, and it is an honor working with them to improve people’s lives in Niger,” said U.S. Army Capt. Verzoni, the U.S. Civil Affairs team commander.

The missions are building ties between members of the FAN and villagers in a region with porous international borders that are prone to extremism. Groups linked to the Islamic State group, al-Qaida and other organizations have launched regular attacks in Niger, particularly in the area bordering Mali.

“FAN Soldiers who used to have little or no connection with these villages are now out interacting with the children, playing soccer, speaking with village elders of tribes different from their own,” U.S. Army Staff Sgt. Jarrod Mattison of the Civil Affairs team told ADF.

Wagner Group Violence Against Malians On The Rise