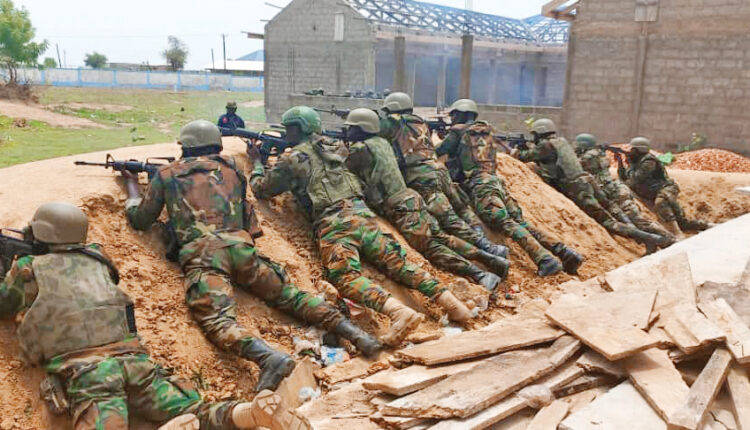 Ghana Armed Forces Soldiers stepped from a helicopter and sprinted toward a simulated enemy with their weapons drawn as a commanding officer barked instructions.

It was the opening day of Operation Eagle Claws, an exercise meant to prepare military and emergency response personnel for terrorist threats.

The 2021 Operation Eagle Claws exercise focused on responding to terrorist attacks such as those carried out during the year in Burkina Faso and Côte d’Ivoire.

“Ghanaians, and particularly those in this sector, know that terrorism is real — it is on our doorsteps,” Col. William Nii Nortey, director of Army operations, told Ghanaian TV channel My Joy. “We should all be ready and know what is happening around us. We must be ready to protect and defend the integrity of Ghana.”

“That is our basic mantra: If you see something, say something,” he said.

Days before the exercise began, President Nana Akufo-Addo told France 24 that he views increasing terrorist attacks in the neighboring Sahel region as “the most important security challenge” for Ghana and the 14 other countries in the Economic Community of West African States.

“We are very concerned by the situation,” Akufo-Addo said. “We know that in Ghana, this is not something that will just stop at our borders. There are coastal countries, countries in Western Africa, and these countries are also targets of terrorism. They are just as much targets as the Sahel countries.”

This year, some of Operation Eagle Claws’ first drills were conducted with customs and police officers at Hamile Border Post, where Soldiers practiced tactical skills while responding to a simulated small-arms attack near the Burkina Faso border.

In another drill, troops responded to a mock attack on foreigners staying at a hotel in Wa in northeast Ghana. It included combat techniques, extinguishing fires, mine detection, medical evacuation and profiling arrested terrorists.

Nigerien Military Lends Hand to Those in Need