‘They Should be Climbing the Ladder’ - Africa Defense Forum
Menu

Browse: Home   /   ‘They Should be Climbing the Ladder’ 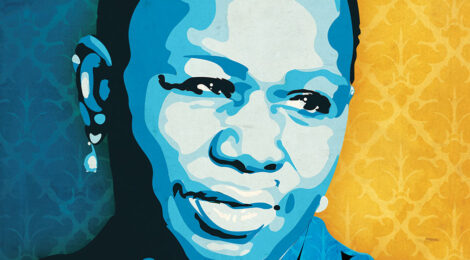 Originally from Guinea, Bintou Keita joined the United Nations in 1989 and is now assistant secretary-general for Africa. She has served in various roles, including deputy special representative for the African Union-U.N. Hybrid Operation in Darfur (UNAMID), and chief of staff and director of operations for the United Nations Mission for Ebola Emergency Response. This interview has been edited to fit this format.

ADF: Could you share a bit about yourself with our readers? Was there anything in your personal or professional background that inspired you to spend your career working on issues of peace and security?

Keita: My father was in the military. And at the time, there were issues between Guinea and France. So I grew up hearing a lot of stories about how military engagement in various countries can be a blessing but also, at times, can be difficult. My father wanted me to be in the military, and I refused. I said, “No, I can’t be traveling all over the world.” So here I am years later, my father is no longer on this planet, but I am working in peacekeeping operations and traveling around the world.

ADF: You have made it a priority to recruit more women to serve in U.N. peacekeeping missions. However, women still make up only 5% of uniformed personnel. Why do you think it is important to increase these numbers?

KEITA: I’ve seen firsthand the difference it makes in the operation. I remember one night in January 2016, when I was in Darfur, one of our team sites in North Darfur, Sortoni, received more than 21,000 internally displaced people [IDPs]. And we only had 275 peacekeepers from the Ethiopian contingent. At the time, no woman was available to engage with the IDPs. So our peacekeepers were making their best effort to provide assistance. There were a number of women who had been delivering babies on the way to the team site, and they were in very difficult circumstances, including having no clothes for their babies. So, having our male colleagues engaging at this time was quite a challenge. One month later, I was back in that same place, and we had our formed police unit with a number of women from Malawi, and they managed to engage with most of the women there. One of them was even able to speak in the local language, which helped with the women but also with the children. So, for me, it’s about increasing the effectiveness of the work that we do. 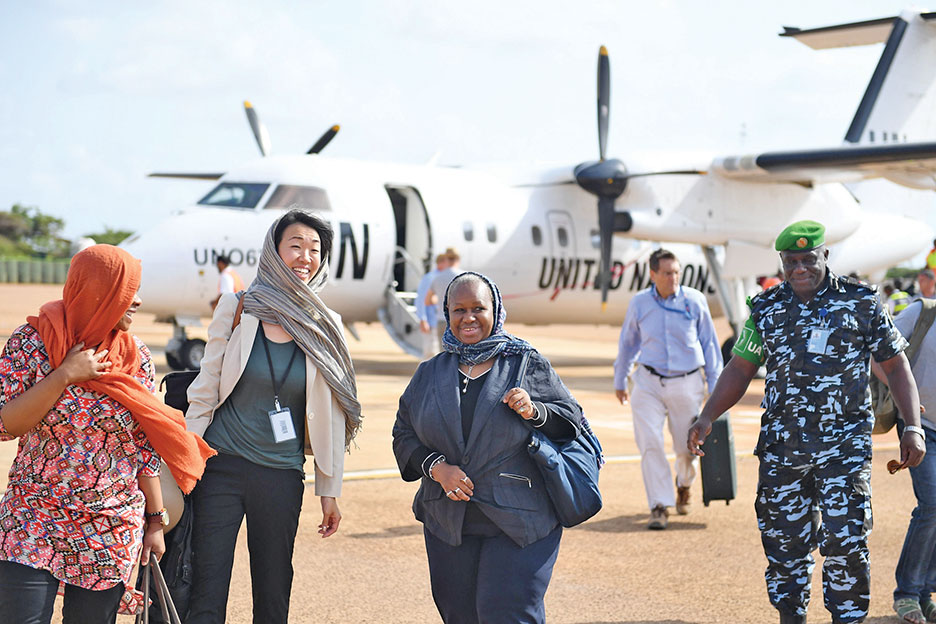 Keita arrives at Kismayo airport during her visit to Jubaland State in Somalia.

ADF: There has been some reporting on the success recorded by female engagement teams in the Democratic Republic of the Congo. Do you see this as a good model for other missions? Are you encouraged by the success of these efforts in the U.N. mission there, MONUSCO?

KEITA: We are very encouraged with the female engagement teams. We have now 10 female engagement teams. Beyond MONUSCO, in UNMISS [United Nations Mission in South Sudan], we’re talking about an entire unit of female Soldiers coming from Rwanda to join. This is not to say that we only need women; we need both — because it is diversity that brings added value in how the local population perceives the work of the peacekeepers. Particularly when the women can see people who look like them. It’s a plus, and it reduces the fear and increases a sense of safety and security.

ADF: What tangible steps do you hope to take to increase representation of women across U.N. peacekeeping missions?

KEITA: We have two challenges. Whenever we have a number of women already within the national armies, the challenge is for them to be put forward to participate in peacekeeping. We are also trying to see how we can increase their involvement in decision-making and leadership roles. The other challenge is that a number of national armies don’t have the numbers because women are not joining. This is due to a perception of what peacekeeping is about. We have to work with the agencies to form programs in the national armies so then we can have specific stories about what the female engagement provides in the world of peacekeeping. And we have to show the investment and return on investment in how the local communities feel more reassured and are finding themselves better protected when mixed engagement is used. We have to work on both ends. For females to join the national armies, there has to be a conducive environment and an understanding that they will not just be put into the traditional roles of nursing or logistics or administrative roles. They should also be climbing the ladder and be nominated for appointments as force commanders, sector commanders and so on. I’m very happy that we’ve managed to have two female force commanders, and I think we should be aiming to have more in the years to come.

ADF: How do you view the importance of winning the “hearts and minds” of the civilian population in the places where the U.N. operates?

KEITA: I think it is critical, particularly at the inception or startup of the mission. As the mission grows up in terms of years, I think we have to transform how winning the hearts and minds evolves. Why do I say this? Because if you have a mission that is 1 year old versus a mission that is 10 years old, the contact with the local community has evolved. There is a history. For me, what is important is to make sure that the civilian personnel and the military understand that the way they come across to the local population is critical. This is done by having certain types of activities or making an investment in what the community needs, particularly when the results can be sustained. If you build a health clinic or drill water bore holes, after a while the local government or the central government can take over. Even schools, because many of our quick-impact projects have to do with infrastructure and vocational training. These projects are a way to connect communities that may not be mixing or mingling otherwise. 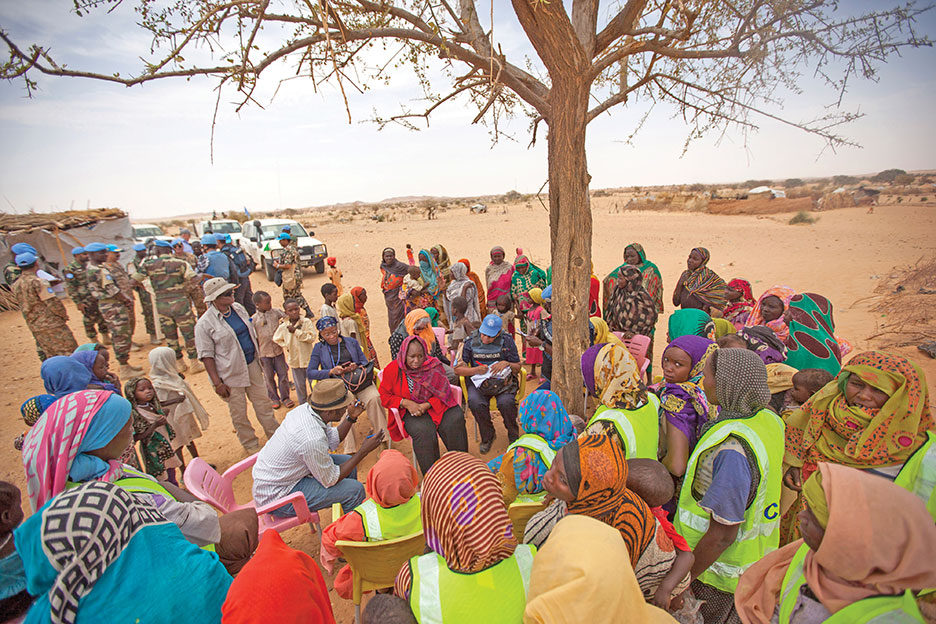 ADF: Recent history shows that acts of indiscipline or bad behavior by just a few peacekeepers can tarnish the image of an entire mission. The U.N. requires specialized training on things such as prevention of sexual exploitation and protection of minors, but what type of training is most effective in preventing misconduct? How has this evolved in recent years?

KEITA: The most important part is the predeployment training, which has clearly been bolstered by our Integrated Training Service in partnership with our military colleagues and our police division colleagues. This is done in partnership with the troop-contributing countries [TCCs]. Even after the predeployment training, there are trainings that happen during the mission. These are important because they are refreshers on a daily, weekly or monthly basis that there is zero tolerance for sexual exploitation and abuse. This is critical for our credibility and moral stance vis-a-vis the population. I also believe in a strong chain of command in terms of the discipline, ensuring that the troops have access to a commander who truly enforces discipline and holds the Soldiers or police accountable. All of this is critical because it sends the signal that no tolerance is ever acceptable, not even for one case. Since U.N. Security Council Resolution 2272, more and more I see efforts made here at HQ level; with the TCCs, there is also a basket fund put in place for tackling the issues of the aftermath of the sexual exploitation of youth. I hope that, as we move forward, the sanctions put in place by individual nations are going to be a deterrent. We have all the training, we have the discipline and we also now have the appropriate level of sanctions.

ADF: How important are issues of cultural sensitivity and cultural familiarity for peacekeepers?

KEITA: I believe that, for each deployment, there are very specific circumstances. During training I’ve seen rehearsals of “protection of civilians” scenarios. During the rehearsal I have seen a gesture or behavior that I would say, “Well, if we were in a particular country I would avoid this, because it will be seen as offensive or aggressive to the population.” So I believe having rehearsals and training and linking them to cultural sensitivity is important. And having proper briefings on the culture of the countries is critical to raise awareness and to remind everyone that there are ways where we behave instinctively, and it’s not always congruent with what is expected of us.

ADF: What’s an example of something that can be misinterpreted?

KEITA: One aspect that comes to mind is assertiveness. When we are in negotiations and we look at things in the Western way, it’s always about being very direct. But with most of the cultures on the continent, you have to be patient. It’s about giving time for people to internalize and understand that you are genuinely connected. It’s a conversation, and you are not there to impose something on them. It becomes a discussion about a partnership between equals and not from a condescending point of view where we know it all and they are the “beneficiaries.” For me, it’s not just in peacekeeping, but I see it on a larger scale. We have to question our approach to dialogue, to conversation. Even though we know there is a goal to be attained, how we go about it is going to be the trigger in terms of cultural sensitivity. 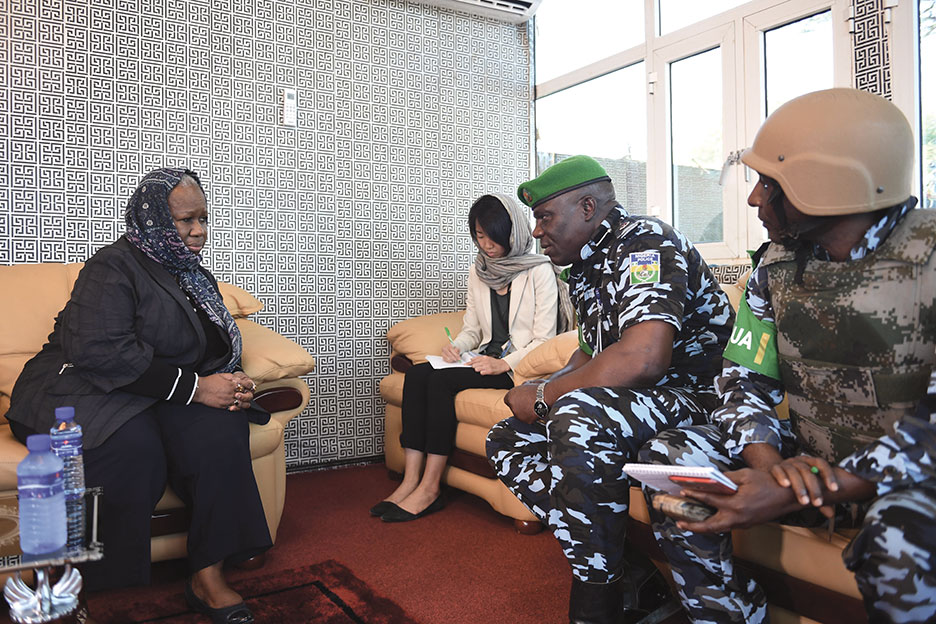 Keita meets with African Union Mission in Somalia police officers in Kismayo during a five-day visit to the country in June 2019.

ADF: Many African countries have a deep reserve of peacekeeping experience. But many countries struggle to provide access to training. What needs to be done among troop-contributing countries, particularly on the African continent, to improve domestic training capacity for peacekeeping forces?

KEITA: I believe that the African Union is doing a lot in trying to tap into organizing the way the various TCCs across the continent will come on board. I know there are various training centers being put forward. There is one in Cairo; in Addis Ababa, Ethiopia; in Accra, Ghana; and in Mali. So, all in all, I think we are going in the right direction in ensuring that we have a systematic way to prepare the troops. If there is one thing I would say, it is that we need to go beyond the traditional ways of preparing the troops when we think about asymmetric threats, terrorism and violent extremism. This is part of the new DNA of this era, and I don’t think the traditional way to prepare the troops is sufficient. In terms of new equipment, new technologies and how to go about collecting intelligence in the era of social media, I believe there is work to be done.

← Bridge Brings Together The Gambia, Senegal
Warm Hearts in a cold land →