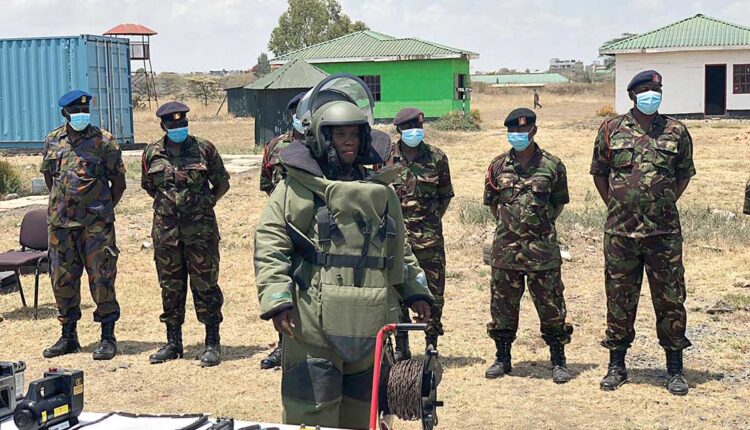 Kenya is building a counter-improvised explosive device (C-IED) center in Embakasi to fight extremist threats in the region.

The new facility at the Humanitarian Peace Support School is funded by Germany and the United Kingdom. Since 2016, the C-IED wing has trained more than 1,700 military and police personnel from Kenya and 21 other countries.

During a cornerstone-laying ceremony, experts from the Kenya Defence Forces (KDF) demonstrated how to safely detonate an IED using a remote-controlled robot. They also showed how a water bottle can be used as an explosive device.

“IEDs are killers; they do not only kill Soldiers but also police officers and civilians,” German Deputy Ambassador Thomas Wimmer said at the event. “That’s the reason Germany is willing to fund the counter-IED wing. It really helps prevent people from being killed, crippled and injured.”

“These devices pose the greatest threat to KDF and troops from other contributing countries who are fighting al-Shabaab as part of the African Union Mission in Somalia,” Josephine Gauld, British deputy high commissioner to Kenya, said during the ceremony.

Gauld said the C-IED center is part of an expanding center of excellence in Embakasi, where the region’s armed forces can learn skills needed to combat a multitude of threats.

“The Humanitarian Peace Support School is a unique initiative on the African continent, providing a solid foundation on which to build a competent, capable regional center of excellence where police and military personnel across East and Southern Africa receive IED disposal training that helps to promote security and stability in Somalia,” she said.

The first phase of construction will cost about $2.6 million and will include 12 buildings.