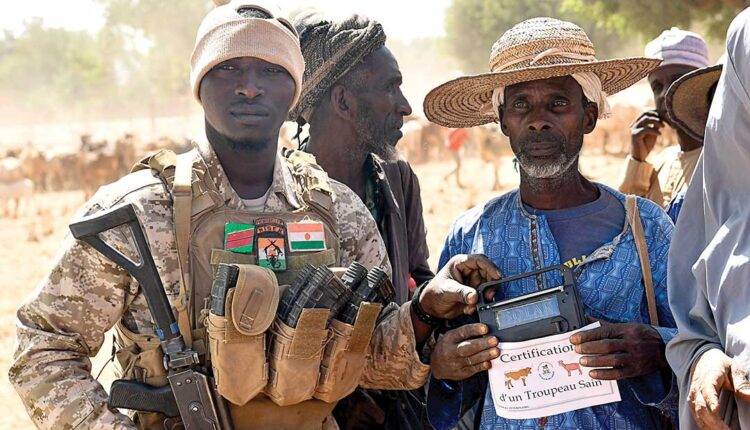 During three days in February 2022, herders from southwestern Niger brought cattle and other livestock to receive badly needed veterinary care at a free event.

During the event in Gaya, veterinarians treated more than 13,000 animals with vaccines and vitamins. Organizers also handed out solar-powered hand-held radios, which allow herders to track weather and security developments in the region.

The event was one of many organized by the Nigerien Armed Forces (FAN) Civil-Military Action (ACM) division, whose goal is to support vulnerable communities and build trust between the military and civilians.

The ACM unit at Air Base 101 in Niamey organized the veterinary event with support from U.S. Civil Affairs Soldiers stationed at the base. Similar events have been held around Air Base 201 in Agadez.

“The different actions of defense and security forces and American partners are really appreciated by the local population,” said Capt. Badagé Oumarou, commander of Air Base 201, after an event in 2021 in which Soldiers handed out rice, footballs and prayer mats. “The people of Teghazert showed their gratitude and urged us to expand and continue the effort.”

During its first year, the Agadez ACM unit conducted 11 aid missions in the region, helping an estimated 4,200 residents with staple foods and sanitation supplies to protect them from COVID-19.

“Donations like this show the long-term value of the efforts led by the FAN/ACM, especially as the unit continues to expand its reach and serve more communities,” said Sgt. Joseph Bovee, a U.S. Civil Affairs Soldier.