Snakebites Maim and Kill Thousands Each Year; Treating Victims Can Be Costly and Difficult 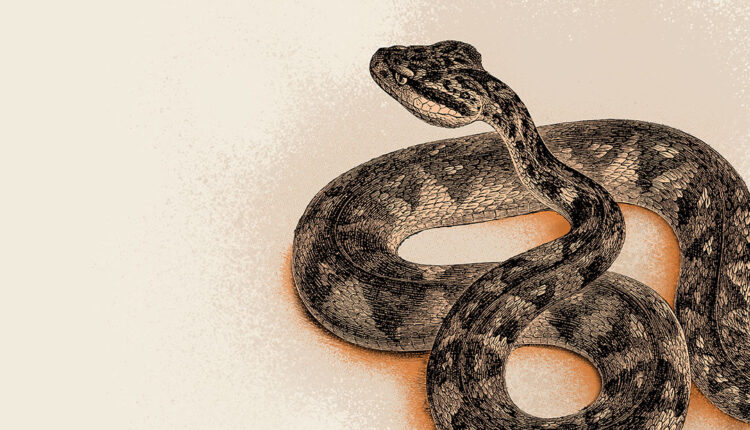 Heads of state are accustomed to welcoming visitors. They entertain foreign officials with frequency, rolling out red carpets and assembling military honor guards adorned in their finest uniforms.

But not all visitors come with an official entourage, much less an invitation. In fact, a couple of unannounced visitors to Liberian President George Weah in 2019 caused quite a stir.

Two black snakes infiltrated Liberia’s Ministry of Foreign Affairs building through a grate above and behind the security desk on the ground floor. A video shows one snake, of unknown species, twist and writhe where the ceiling met the wall while a gaggle of onlookers chatted excitedly. Liberia’s president has worked in the ministry building since fire destroyed the Executive Mansion in 2006.

Press secretary Smith Toby said at the time that all employees were ordered to stay away for a few days so that the building could be fumigated to get rid of the snakes.

“That building’s been there for years now, and [because of] the drainage system, the possibility of having things like snakes crawling in that building was high,” Toby told the BBC.

The sight of any snake in a government building had to be scary and unsettling, but no one was hurt and the president safely returned to his office. But for many across the continent, encounters with snakes can have deadly consequences.

Pwagrida Samson, 19, was the first patient of the day at Snakebite Treatment and Research Hospital, Kaltungo, in eastern Nigeria one morning in August 2020. Samson was bitten on the left foot by a carpet viper, a small, venomous snake common to the area.

“I was in the field and walking to go to the toilet, and I stepped on a snake and was bitten,” Samson told PBS NewsHour through an interpreter. “Now I’m having a lot of pain where the bite is.”

The Kaltungo hospital treats snakebite victims exclusively, and Samson’s case is common. A carpet viper’s venom prevents coagulation, which can lead a person to bleed to death without treatment. Like many people in rural areas, Samson started out treating his bite at home using traditional methods, which only delay effective treatment at the risk of severe illness and death. When the bleeding continued, he traveled more than 160 kilometers to reach the hospital. Kaltungo is the only hospital of its kind in Sub-Saharan Africa, and it sees a lot of patients. As PBS filmed, three snakebite victims arrived within 30 minutes’ time.

The hospital doesn’t always have the antivenom it needs because of government funding shortages, PBS reported. Sometimes, patients have to buy their own antivenom from a nearby pharmacy.

Samson’s experience is repeated all over the continent year in and year out. The problem is so pervasive that the World Health Organization (WHO) in June 2017 reinstated envenoming — poisoning from snakebites — to its list of neglected tropical diseases alongside chikungunya, dengue fever, leprosy and rabies, among others. The move is significant because it “adds impetus to antivenom development and boosts the likelihood of investor funding for snake-bite prevention and treatment access initiatives,” the WHO stated.

There are more than 3,000 species of snakes in the world, and about 20% are venomous. However, only about 7% are considered “medically important” because of the harm their venom causes, according to the WHO.

Even so, Africa is home to hundreds of species of snakes, and a significant number are venomous, including some of the most dangerous snakes on the planet. For example, the black mamba is perhaps Africa’s most fearsome snake. It averages 2.5 meters long but can grow to more than
4 meters. It can move at more than 20 kilometers per hour and is highly aggressive when threatened or cornered. The snake’s skin is brownish gray, but it gets its name from the pitch-black maw that is visible when it opens its jaws to strike.

The black mamba’s neurotoxic venom shuts down its prey’s nervous system through paralysis. Two drops are sufficient to kill an adult human, and without antivenom, death can come in a few short hours.

The black mamba is but one of Africa’s dangerous venomous snakes. The deadly roster includes the boomslang, the puff adder, the green mamba, the Gaboon viper and the Cape cobra — just one of several species of cobras on the continent.

With such an array of dangerous snakes spread across the continent, snakebites are a serious health concern for Africans. The WHO estimates that globally 5 million people are bitten by snakes each year, resulting in 2.7 million envenomings. Of those, between 81,000 and 138,000 die each year. Another 400,000 people require amputations or are permanently disabled. Many other snakebites go unreported.

The numbers are equally sobering for Africa. The WHO estimates that up to 20,000 people a year die from snakebites in Sub-Saharan Africa alone, a number that is almost certain to be underreported. Even with the most conservative estimates, snakebites kill far more people in one year than the deadly Ebola virus has killed in Africa since the 2014 West African pandemic.

Most snakes, be they venomous or harmless, desire to avoid contact with people. They will flee rather than attack, unless stepped on, mishandled or when defending themselves from a person trying to kill them as pests.

Naturally, most people encounter snakes in rural settings or in remote forests and jungles. This makes effective care for snakebite victims all the more complicated, because after a bite from a venomous snake, time is of the essence. Victims must seek immediate professional medical care — not traditional healers — so that appropriate antivenom treatments can begin. Such treatment is the only hope for those bitten by the black mamba and the other most venomous snakes.

Antivenom, also known as antivenin, is the most effective way to treat those bitten by venomous snakes. Often it is the only treatment that can stave off death. However, production and availability of antivenom can be a challenge, especially for poorer nations with limited health infrastructure. It’s also expensive.

To produce antivenom, a snake specialist must “milk” venom from a snake. This requires the precarious handling of the deadly serpent while forcing it to open its mouth and bite through a plastic membrane that covers a glass. The handler gently presses the back of the head to force the venom to drip into the glass. The painstaking milking of one snake produces a small amount of the toxin. For example, it took three years and 69,000 milkings to produce 1 pint of venom for one species of North American snake, according to ZME Science. But anyone bitten by a deadly snake will require multiple vials of antivenom that match the snake and its geographic region. 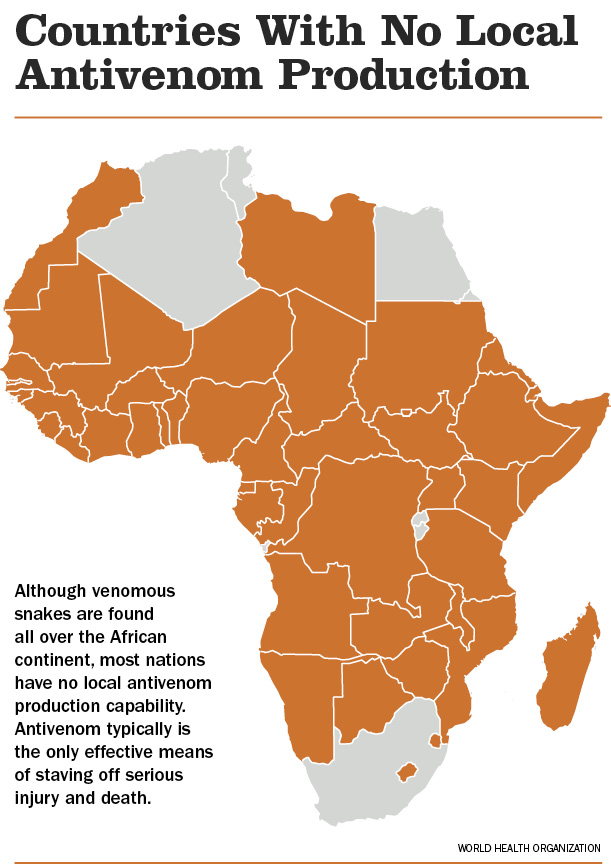 Once venom is extracted, it is subjected to a process that is more than 100 years old. The venom is freeze dried at temperatures below 20 degrees Celsius and labeled with the snake’s species and geographic origination. From there, the venom is diluted and injected into animals — most often horses — and extracted in blood weeks later after antibodies have formed and bonded to the venom.

Plasma is extracted from the blood and treated to isolate active agents. Then samples are converted to powder or liquid concentrates, frozen, and shipped to hospitals and treatment centers, according to ZME Science.

Despite this process, Johan Marais, CEO of the African Snakebite Institute (ASI) in South Africa, said scarcity isn’t really the biggest problem with antivenom. “The problem is the cost of antivenom as well as refrigerated facilities to store it and the expertise to use it,” he told ADF via email. “Doctors need training to properly administer antivenom.”

Marais said one vial of antivenom can cost up to 1,736 South African rand, which is roughly $105. That means treatment for one bite can require between $630 and $1,575 just for antivenom. The ASI does not produce antivenom, but it does promote and market serums produced by the South African Vaccine Producers (SAVP), a subsidiary of the nation’s National Health Laboratories Service. SAVP is the only producer of antivenom in South Africa.

Some estimates place the number of vials necessary to treat bites — and the costs of those vials — at much higher numbers, with some bites requiring 20 to 25 vials at rates of up to $2,200 each, ZME Science reported.

The Australia-based Global Snakebite Initiative has developed a program called AntivenomAID, which aims to develop “safe, effective and affordable antivenoms.” The project will use a private-sector partnership in which scientists, clinicians and manufacturers develop an antivenom effective against most “medically important” Sub-Saharan African snakes, thus improving the quality of life among the rural poor and in farming communities.

AntivenomAID seeks to establish benchmarks for antivenoms and protect the market against the presence of ineffective, substandard products.

These challenges surrounding antivenom’s production, distribution and quality control are why education and good, common sense are so important in combating the snakebite problem.

Marais’ group focuses on education and snake awareness. The ASI website is full of free downloadable posters and tips for identifying snakes, avoiding bites and treating snakebite victims. Marais and his staff train others in snake awareness, first aid and proper handling of venomous snakes. ASI has trained doctors, private wildlife rangers, veterinarians, wind and solar farm companies, and security staffers for mining and construction companies who work all over the continent, from Guinea to Kenya and Angola to Mozambique.

Among Marais’ clients is LEAD Ranger, a Kenya-based not-for-profit training provider that focuses on scouts and rangers employed by nongovernmental organizations and private entities, such as Wildlife Works, Mara Elephant Project and others, said Boris Vos, head of operations for LEAD Ranger.

Snakebite First Aid is a module in the organization’s Ranger Life Saver Instruction Course, Vos told ADF by email. “We address preventive measures for snakebites, in regards to field camps and rural communities, snake recognition and immediate treatment in case of snakebites. The underlying principle in regards to treatment is that the primary role of a ranger is to avoid further bites, stabilize the patient and evacuate to definitive medical care at the earliest opportunity.”

Because rangers operate in remote areas, they often are the first point of contact if a snake bites someone, so training them to handle bites properly is essential.

A significant part of the instruction addresses anatomy, physiology and snakebite pathology. “We find this is crucial in explaining why traditional methods, also in regards to so-called witchcraft, are not effective,” Vos said. “There is an incredible amount of misinformation and misconception about snakes and snakebites, especially in rural areas. To counter that, the rangers need to be equipped with the underlying knowledge.”

Some national military forces on the continent also incorporate instruction on snakebite avoidance and treatment into Soldiers’ training.

African Soldiers train and serve in some of the most challenging environments on Earth, whether it be the deserts of northern Mali or the dense jungles of the Democratic Republic of the Congo. This service, which includes national training, international peacekeeping missions and more, inevitably will bring Soldiers into contact with all manner of wildlife, including snakes.

“When embarking on a military exercise in any jungle, instructors conduct safety briefs to all Soldiers involved,” Chawinga said. “Medics that carry antivenom on top of other medicines go along with each section or platoon assigned to a specific operation.”

This process also is followed when MDF Soldiers participate in peacekeeping missions, and a supply of antivenom is stored at the battalion level one hospital, Chawinga said. Even so, Soldiers rarely are bitten.

“The secret lies on knowing never to disturb their habitats,” Chawinga said. “Once in the jungle, and after noticing that you are within the territory of very dangerous wild animals or snakes, the best action is to relocate to other areas.”