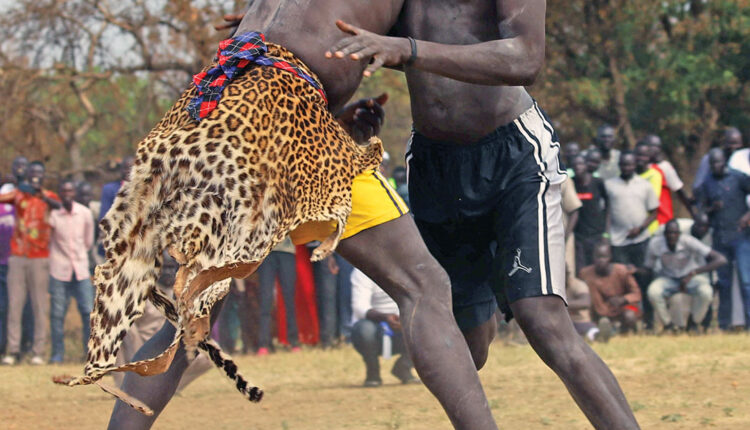 South Sudanese wrestler Kur Bol Jok strode into the arena, puffed out his chest and faced his opponent, bracing for the fight.

Wrestling is popular in the world’s youngest nation, which has been devastated by five years of civil war. Athletes say it is one of the few outlets in which ethnic groups who have fought each other can engage in friendly competition.

“Wrestling brings peace as different people come from different places to meet and create friendship,” Jok said before the match. “Winning brings joy, and losing is normal because it is not a real fight.”

Matches draw huge crowds across the country. Some were held during the conflict.

Some wrestlers smear their faces and chests with white ash. Bright animal print cloth, slashed into ribbons, dangles over their shorts.

Jok, dressed in a leopard print, strained as he grappled with opponent Mar Jalot before flipping him over in the red dust and putting his hand on Jalot’s chest to signify victory. There are no hard feelings.

“We came here for peace with all the tribes gathered to witness the game,” said Jalot, whose outfit was decorated with cow-print cloth.

The carnival atmosphere, in which wrestlers dance to celebrate victories and women chant the names of winners, is a welcome respite from life’s hardships.

The oil-producing East African nation won independence from neighboring Sudan in 2011 after decades of scorched-earth warfare. Then civil war broke out two years later, killing an estimated 400,000 people before the sides signed a peace deal in 2018. On February 22, 2020, the president and former rebel leader formed a long-delayed unity government.

Sports is one of the few distractions in a nation with few roads, little electricity and where most schools don’t function. Most important, it unites young people divided by war, said wrestling coordinator Limor Joseph.

“It is … the games that brings them together,” he said.

Kenyan Football Team is a Symbol of Hope