Protecting Civilians in Times of Conflict 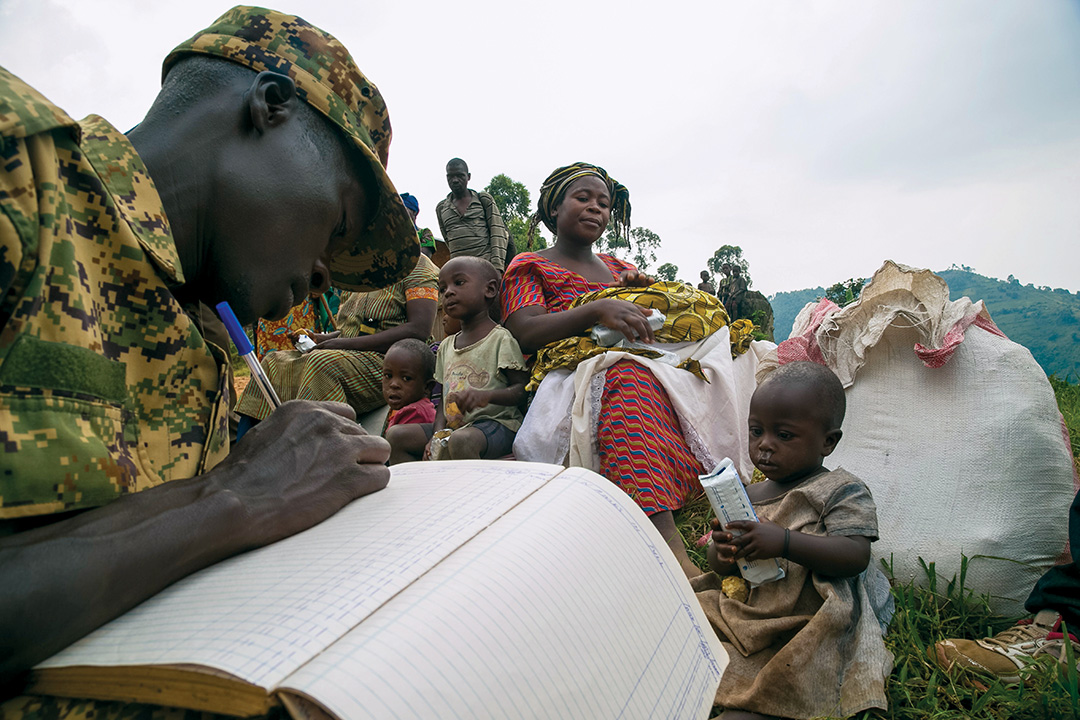 In asymmetric wars, more needs to be done to protect people caught in the middle

A small bus loaded with 24 people from Burkina Faso was crossing into Mali, en route to a weekly market in the town of Boni. Nine kilometers from the market, the vehicle triggered a land mine planted by Malian insurgents.

All 24 people, including four babies and their mothers, were killed in the January 2018 incident.

It’s a common story. At least 600,000 African civilians in 27 countries have been killed in the past 20 years during conflicts, with millions more wounded and displaced. Countless others have died from the indirect results of conflict, including starvation.

Peacekeeping missions have a mixed record when it comes to protecting civilians. Mission mandates, training and policy are often inconsistent or ineffective at shielding the most vulnerable people from violence.

Jide Martuns Okeke and Paul D. Williams edited the 2017 book, Protecting Civilians in African Union Peace Support Operations: Key Cases and Lessons Learned. In it, they note that “it has often been challenging to generate consensus and guide coordination among stakeholders about what needs to be done, when and by whom.” The book also notes that “there is not always a clear delineation of roles and responsibilities … in ways that promote a collective understanding, approach and goals toward meeting the specific challenges of civilian protection.”

“Assuming one can identify who are civilians and who are combatants, which is not always easy, the main challenges revolve around implementation and the issues of expectations, resources and the peacekeepers’ mindsets and their willingness to be proactive and take risks to protect civilians,” Williams told ADF. “The most dangerous situations are arguable where forces aligned to the government/host state are the ones causing harm to civilians. This puts peacekeepers in a very difficult situation as their presence depends on the legal consent of the host government.”

The Darfur region of western Sudan is an example of peacekeepers at odds with the host government. In 2003, rebel groups took on the government of Sudan, alleging that the government discriminated against non-Arabs. The government responded by supporting a group of militias known as the Janjaweed, which means “devils on horseback.” The Janjaweed, often well-trained, looted and burned villages, polluted water sources, and murdered, tortured and raped civilians. The nongovernmental organization World Without Genocide says that more than 480,000 people have been killed, and more than 2.8 million have been forced to leave their homes as of 2018.

In 2004, the African Union established the African Union Mission in Sudan (AMIS) specifically to protect civilians in Darfur. Initially, 150 Soldiers were assigned to AMIS, which eventually expanded to 9,000 troops. That proved to be a fraction of the personnel needed. Although AMIS was criticized for its logistical problems, delays and lack of capacity, its real problem was that its force was too small to deal with Darfur’s problems.

A U.N. resolution adopted in 2014 specifically spells out the duties of UNAMID personnel regarding civilians. It requires the mission to “protect civilians, without prejudice to the responsibility of the Government of Sudan.”

“No matter how many other tasks are undertaken by the peacekeepers, their mission will not be successful while the basic needs of civilians are not met,” the researchers concluded.

The Darfur intervention had its roots in a 2001 report of the International Commission on Intervention and State Sovereignty. The commission was a response to then-U.N. Secretary-General Kofi Annan’s question of when the international community must intervene for humanitarian purposes. The commission said that sovereignty not only gave a country the right to control its affairs, it also gave a country primary responsibility for protecting its citizens. The commission asserted that when a country fails to protect its people, through a lack of ability or lack of will, the responsibility shifts to the international community.

In creating the Darfur mission, the U.N. stipulated that it should have “a predominantly African character and the troops should, as far as possible, be sourced from African countries.” As of the end of 2017, the countries providing the most Soldiers and police to the mission were Rwanda with 2,424 and Ethiopia with 2,400.

One hallmark of UNAMID has been its use of formed police units (FPUs). As defined by the U.N., an FPU consists of about 140 police officers trained and equipped “to act as a cohesive unit capable of accomplishing policing tasks that individual police officers could not address.” A well-trained, well-disciplined unit can operate effectively even in “high-risk” situations such as Darfur. FPUs have three defined responsibilities: maintaining law and order; protecting U.N. personnel, equipment and facilities; and standard policing operations that do not involve threats to the military.

The African Union Mission in Somalia (AMISOM) originated in January 2007 as a peacekeeping force in the country’s insurgency. The mission originally had no formal strategy to protect civilians. Williams, an associate professor at The George Washington University, noted that AMISOM delayed adopting a formal policy of protecting civilians, known as PoC, because it also was charged with protecting its own personnel. “Adopting a PoC mandate was thus thought likely to raise local expectations without necessarily providing the tools needed to meet them,” Williams wrote.

“Particularly during its first four years, AMISOM had a distinctly ambiguous relationship with civilian protection issues,” noted Williams. “On the one hand, AMISOM was mandated to protect certain VIPs associated with the political reconciliation process; degrade al-Shabaab and other anti-government armed actors; and provide medical care, water supplies, electricity generators and humanitarian assistance to significant members of Mogadishu’s stricken civilians, because of the absence of humanitarian actors on the ground.”

The mission, he said, was even accused of harming civilians, “both directly, through instances of indiscriminate fire and the targeting of civilians who were mistaken for enemy fighters, and indirectly, by failing to protect others from al-Shabaab.”

That changed in 2014, in part because the mission was making progress and needed more help from Somali citizens. AMISOM decided that in order to promote reconciliation and create a safe space for national dialogue, it needed to do a better job of protecting clan leaders, religious leaders and civil society leaders.

“Parties to the conflict are simply not doing enough to shield civilians from the violence,” U.N. Special Envoy to Somalia Michael Keating told Voice of America. “This is shameful.”

The peacekeeping missions in Africa and elsewhere have provided some valuable lessons:

If PoC is a priority, say it clearly: Soldiers, police and civilians involved in peacekeeping missions need clear, direct instructions on the priority of PoC. If the directives of protecting civilians are not clear, that aspect of the mission will fail. Williams told ADF that “it is also important to have clear rules of engagement on the use of force” in protecting civilians. “However, discretion must be left to contingent commanders in the field to make the final call about how best to act in a particular crisis situation.”

Underfunded missions don’t work: Williams said that “a small under-resourced force which is unable to protect itself is hardly in a position to engage in proactive PoC activities.” In any mission, the peacekeepers must have the proper logistical, financial and human resources support to succeed. A clear mandate and consistent funding are critical to the protection of civilians and the success of such missions in general.

Civilians expect protection from peacekeepers: At the very least, peacekeepers should try to minimize threats to civilians in combat regions. In many cases, such as Darfur, civilians have higher expectations of PoC than the peacekeepers can deliver.

Patrols provide protection and information: Protecting civilians requires regular and consistent patrols and military escorts. In Darfur, UNAMID carried out 150 daily patrols to protect civilians, particularly women and children. The patrols were to allow the civilians to go about their daily lives. The operations also provided regular military escorts for aid workers, NGOs and humanitarian convoys. The patrols also enabled UNAMID to regularly assess security throughout the region.

Get buy-in from all the groups involved: A PoC mission requires an integrated missionwide approach to align military, civilian and police components. All the actors must have a clear vision of what their roles will be in protecting civilians.

Protecting civilians is complicated: A proper PoC mission has, by necessity, a complex structure with military, police and civilian components. Peacekeepers need to go into the mission properly equipped and properly trained. An effective mission includes a joint operations center. A rapid-response capability is an essential tool.

Understand the conflict and the threats to civilians: A PoC mission requires observation, record-keeping and information. Planners, managers and officers must have adequate data to analyze what’s working and what isn’t. A joint mission analysis center is a key tool. “What’s required is a threat assessment of potential civilian harm based on an accurate understanding of conflict dynamics,” Williams said.

Be flexible and be prepared to adapt: For example, if local police are inadequate, peacekeepers must be ready, and trained, to maintain public order. As a peacekeeping mission gains traction and warfare recedes, it’s important for all the players to change tactics to preserve civilian trust and support. UNAMID has relied on a number of strategies, including mobile operations bases, quick response units and early warning systems.

Be prepared for a long-term commitment: Unlike conventional warfare, Africa’s asymmetric wars seldom have a clean, specific ending. Groups such as al-Shabaab and Boko Haram can be beaten back, but have not, so far, gone away.

He’s the Marco Polo of Football