One Army, One Nation 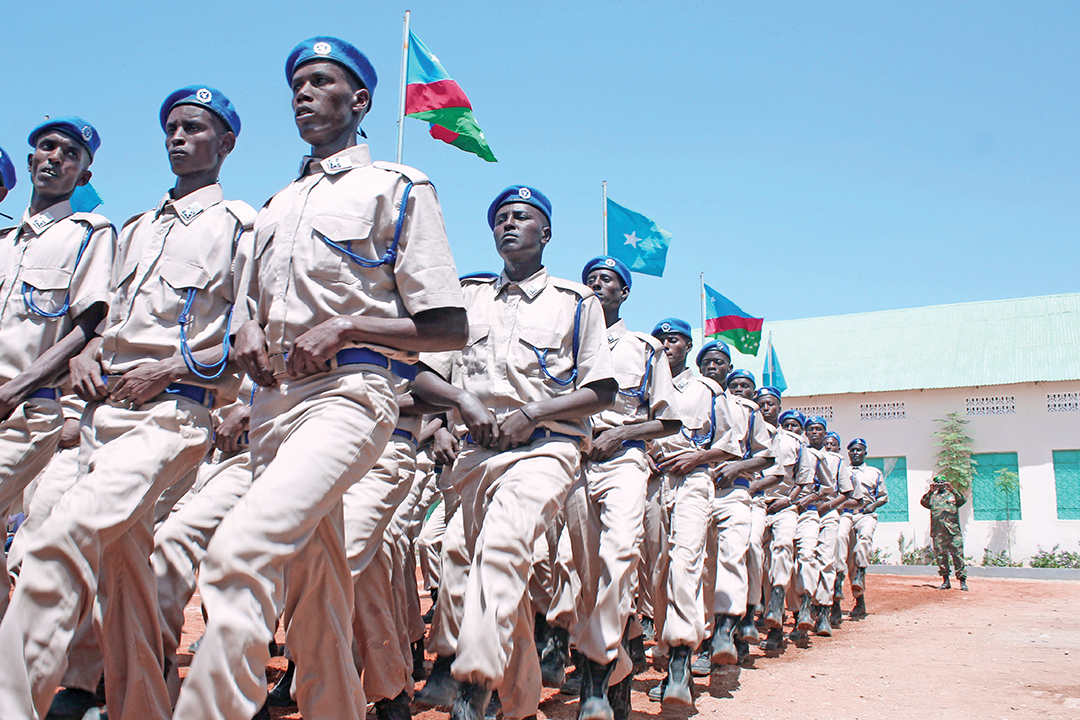 It’s a bright day in the month of Ramadan in the central Somali city of Beledweyne, and the town is buzzing. Watermelons are piled high in the market stalls, ready to be loaded onto trucks and shipped all over the country. Boys herd goats down the street, and women in brightly colored scarves walk in small groups.

In the middle of it all is Brig. Ahmed Farah Abdulle of the Somali National Army (SNA) with a gun slung over his shoulder and wearing a red beret. He was only 25 years old when he was filmed for a United Nations documentary. He commands three units in the region and glides easily among the shopkeepers as he makes his rounds asking the same question: “xalada ka waran” or “How are you?”

“If they have problems, we will deal with the complaint,” he says. “Whatever is good for them is good for us.”

Viewing the peaceful scene, it’s hard to believe that just three years earlier the town was under the control of al-Shabaab. Fear reigned and people suspected of disloyalty, including two teenage girls, were executed in the town square. The Soldiers of the SNA are determined to turn the page on that dark chapter of history.

“I want to help every Somali that needs assistance,” Abdulle says. “I started as a Soldier within the government, and as you move forward, you move up. I have achieved a high rank. In the future I want to see unity and a government that works for everybody in Somalia.”

Somalia’s leaders know that the nation’s future depends on its ability to train more members of the SNA like Abdulle and replicate this scene across the country. That will include securing some of the most dangerous locales in the southwest of the country where al-Shabaab still holds power.

Time is of the essence. The Ugandan government has said it will pull out its contingent of troops, the largest in the African Union Mission in Somalia (AMISOM), by December 2017 due to frustration with the SNA’s slow progress. Likewise, the African Union plans to remove all troops gradually beginning in 2018 and end its mission by 2020. At that point, the full burden of securing the nation will fall to the Somalis.

“AMISOM will not stay in this country forever,” former Somali Minister of Defense Abdulhakim Mohamoud Haji-Faqi told ADF. “One day sooner or later, maybe after two years if there is a real commitment and real logistical support for the SNA by the international community, AMISOM will be free to leave the country and the SNA will be able to take over.”

Somalia has not had a true national army since at least 1978. The army was factionalized along clan lines and riven with corruption during much of the 22 years the country was ruled by the dictator Siad Barre. By 1991, the army dissolved, and the nation was divided up with warlords and militias vying for regional control.

After several unsuccessful efforts to form a national army, Somalia’s transitional federal government (TFG) and a rival faction signed the Djibouti Agreement in 2008, establishing the current military. By late 2009, the TFG had registered and vetted 2,904 Soldiers to be part of what it called the National Security Force. In 2010, the European Union Training Mission for Somalia began with 400 recruits undergoing training in Uganda. That mission continues to this day, although the training now takes place in Mogadishu.

There have been some signs of progress since that time. In the summer of 2011, Somali forces fought alongside AMISOM in the Battle of Mogadishu to take back the capital from al-Shabaab, including the main market. In 2012, the SNA established six brigades stationed near Mogadishu, including two trained by the European Union Training Mission. That same year, SNA and AMISOM forces collaborated on Operation Sledge Hammer to drive al-Shabaab from its most strategically important base, the port city of Kismayo. In March 2014, the coalition launched Operation Eagle leading to the liberation of 11 al-Shabaab-held districts, and Operation Indian Ocean followed in August, removing al-Shabaab from its remaining coastal strongholds, including the port of Barawe.

“The enemy today is al-Shabaab, and it’s not only Somalia’s enemy. It is a regional problem, it is a global problem,” Haji-Faqi said. “To face this problem, Somalia needs to establish a unified, capable, accountable army.”

As part of AMISOM’s concept of operations, 10,900 SNA Soldiers collaborate with AU forces. But doubts persist about the readiness of the SNA to hold territory on its own, and AMISOM is sometimes forced to rely on clan militias, which tend to be better resourced and more trusted by local communities. Indiscipline and corruption within the SNA have hampered trust. Stories of SNA forces selling their uniforms to insurgents, abandoning their positions, or even collaborating with al-Shabaab abound.

To be successful, AMISOM commanders agree, the mission requires a true joint effort.

“AMISOM is not in a position to hold a town and at the same time chase al-Shabaab. … We can only liberate this country with the help of the SNA,” a high-ranking AMISOM officer told RUSI Journal. “In order to do that, we must make a greater effort to build … [its] capacity.”

But Haji-Faqi said a large barrier to progress has been a lack of morale in the SNA, who fight alongside AMISOM but use inferior equipment and, he said, are being paid one-tenth the salary of AMISOM forces. “The members of the SNA are very brave and willing to die for their country and operate under very difficult circumstances,” Haji-Faqi said. “They are not only side-by-side, they are in front of the AMISOM Soldiers. But they lack the proper equipment, the proper protection for themselves, proper medical treatment.”

Somali leaders have determined they need to build an army of 28,000 professional Soldiers in addition to a police force of 12,000.

For years, a range of external actors have played a role in training the SNA. These include the European Union, Turkey, the United Arab Emirates, the U.S. and a private security company, Bancroft Global. Although the help has been valuable, the lack of consistency poses a challenge.

In June 2016, Somalia opened the Jazeera Training Centre in Mogadishu, which includes classrooms and mock urban landscapes where Soldiers can be tested on a range of scenarios in urban and asymmetric warfare.

“It’s not important the number of Soldiers; what is really important is that they are well-disciplined and professional Soldiers that people can trust for their security,” said Haji-Faqi. “The people should be running to them, not running away from them.”

Building an army from scratch is an incredibly arduous process. A 2016 study co-authored by Somali scholar Abdirashid Hashi and Paul Williams of George Washington University determined that the biggest materiel needs were armored vehicles, heavy weapons and communications equipment. They also called for medical facilities, ambulances and better barracks for the troops. Citing a government estimate, the authors said it could cost $85 million just to fill the equipment and facility gaps for the SNA Soldiers aligned with AMISOM.

Somalia is still under a partial U.N. arms embargo that prevents it from importing heavy weaponry while allowing it to import light weapons for its security forces.

To be a true national army, the SNA needs to reflect the country it serves. In March 2015, the federal government of Somalia approved its plan to rebuild the SNA called the Guulwade (Victory) Plan and, in it, acknowledged that the population does not yet view the army as a national force. Issues of clan bias persist.

“The major issue in Somalia is trust,” said Stig Hansen, a fellow at Harvard University’s Belfer Center and the author of the book, Al-Shabaab in Somalia. “You have to ensure that the army actually consists of generals and privates from all clans of Somalia, not just a couple of clans. Otherwise it will be seen as an army of occupation in many of these regional states.”

To address this, the government created a National Commission for Somali National Army Integration and a military academy where cadets will be selected from all clans. There is also promise in the elite infantry company known as Danab, or “lightning,” which accepts recruits solely on merit and has a wide representation from various clans. Danab units are credited with planning and executing raids that have taken out some of al-Shabaab’s key figures.

Haji-Faqi said Danab and a rapid-reaction force known as Gaashaan or “the shield,” which received U.S. training, are winning respect for their counterterror efforts.

Hansen also sees promise in the “Darawish,” or regional security forces, built up in each of Somalia’s states. He said they are earning trust among the communities they serve and are recording victories against al-Shabaab. “The regional leaders often don’t trust the government and the Somali National Army, so I think there needs to be a regional component to this security solution,” Hansen said. “And I think the Darawish forces will be very important in the final solution. They have a local ownership, and they have more incentives to protect at the local level.”

There is similar progress in terms of regular payment of forces. An automated payroll system for the Armed Forces instituted in September 2016 will make the military a more attractive career opportunity for young Somalis and decrease the incentive for corruption.

Somali President Hassan Sheikh Mohamud believes that an integrated and professional SNA is key to unifying the country.

“You are serving a nation that has been affected by civil war for more than two decades, and you are the ones who have been given an important task in reuniting them,” he told the commission for army integration. “I kindly ask the people to forget about the dark days of our history and forgive each other. The heroes among us are not those who are busy with what happened in the past; the real heroes are the ones who are working to ensure that the old mistakes and mayhem do not reoccur in our country.’’

Military Games are ‘All About Friendship’

Spirit of ‘Rumble’ Lives on in Congolese Boxing School