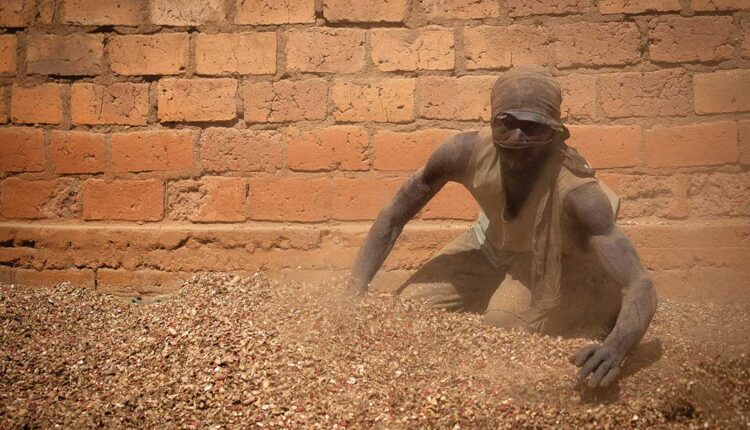 story and photos by AGENCE FRANCE-PRESSE

For many peanut growers in the Paoua region of the Central African Republic, life is a daily battle. They have to coax the plants from the ground, harvest the nuts and shell them. Then they have to survive theft, extortion or worse in a region where rebels and pro-government forces are at war.

“What is preventing us from developing further peanut farming in Paoua is insecurity,” Jean-Paul Ndopaye, manager of a peanut store, told Africanews. “When we want to send our goods to Bangui, to Berberati, or even to Bouar, we might run into road bandits.”

“There are too many threats and thefts,” said Celestine Inforo, 33, shelling peanuts along with about a dozen others on the outskirts of Paoua, a town of 40,000. “We had to sell our production very quickly and at a low price.”

Inforo and her co-workers each fill several sacks in a few hours, then a pair of oxen haul them to a secure storeroom loaned by the Oxfam nongovernmental organization. Outside the storeroom, each bag is weighed and recorded at between 35 and 45 kilograms.

Production greatly exceeds demand in the region, bringing down prices, and 80% of the town’s population works in the peanut industry.

The CAR has been in the grip of a civil war since 2013. The conflict has diminished in intensity in recent years, but it flared up again during the last presidential election in late 2020.

In the shade of a mango tree, women turn peanuts into oil, butter and “kuli-kuli” sticks, which have a high nutritional content. One roasts the nuts. Another kneads peanut butter on a wooden board.

“The problem is processing,” said Mahoua Coulibaly, local manager of the World Food Programme. “This is what must be invested in for the well-being of the population, but for the moment the funds are lacking.”