Since 2011, Libya has gone through almost unimaginable turmoil with every aspect of society touched by violence.

During this time, the country has run on what is sometimes called a “war economy,” with many people, mostly young men, using weapons as their only means of survival. Early efforts at security-sector reform show that the numbers of combatants are staggering. A 2012 effort by the Libyan Warriors Affairs Commission collected data on 162,000 former revolutionary fighters and armed group members. A BBC report tallied 1,700 militia groups. The true numbers may be even larger as there are an estimated 20 million arms spread all over Libya.

As the country attempts to rebuild, it faces a major challenge. How can these people be reintegrated into society? How can they be shown a way to lead a productive life without returning to violence? How can other citizens feel confident that these ex-combatants will not threaten the country’s safety again? And how can we, as Libyans, lay groundwork for an enduring peace?

Development leading to the economic empowerment of the youth and the expansion of the private sector is the key to building peace and stabilizing the country. The main challenges for fragile and conflict-affected countries relate to state and nation building. The core state-building challenges are stabilizing and reforming the security and public sectors, developing the economy, and changing the culture from one prone to conflict to one rooted in peace. One solution to these challenges can be found through small and medium enterprises (SMEs) and entrepreneurship development.

So what is an SME? The definition varies from country to country, but most SMEs are retail businesses with fewer than 50 employees. Barbershops, cafes, corner stores, computer shops, maintenance workshops, small factories or construction work crews are examples. Some medium-sized enterprises with up to 250 employees also fit the definition. SMEs provide jobs to youths and expand the private sector’s share of the economy with the potential to resolve many of the failures the Libyan state has historically faced.

For years, Libya has been overwhelmingly reliant on government jobs, and the oil and gas sector has dominated the economy. This rentier economy encourages a mentality of dependence. Political and economic life revolves around a zero-sum game of controlling state resources. This must change. SMEs and entrepreneurship can turn the economy from one that depends on oil and gas revenues to a diversified economy that takes advantage of Libya’s assets such as its strategic geographic location. This carries added importance as the world looks for alternatives to carbon-based energy sources that Libya depends on for most of its wealth.

SMEs and entrepreneurship also can help turn Libya’s state-controlled economy into a vibrant free market. A free market economy with a large private sector can strengthen state institutions by diminishing the state’s burden to employ large numbers of people. Various estimates have shown as many as 50% of the Libyan population are public sector employees.

The growth of entrepreneurship and SMEs will give hope to Libya’s young people, who have despaired of having a better future and are disappointed after having great hopes for the revolution. Libya has a young population that can be a source of wealth and capital for development or, if neglected, a source of instability and a fuel for wars. Opening avenues of hope for youth, including ex-combatants and armed group members, by providing them with business opportunities will help bring peace and stability to the country.

Resolving the issue of the spread of arms and militias has been the largest obstacle facing the Libyan government in the past eight years. In interviews conducted by the organization I manage, the Libyan Programme for Reintegration and Development (LPRD), ex-combatants and armed group members showed a willingness to disarm and participate in rebuilding the economy if given small business opportunities. In examining other countries’ experiences in disarmament, demobilization and reintegration programs, it is clear that providing ex-combatants with the funding and skills to open small businesses is effective.

Some argue that development cannot be accomplished until full security is reached, but historical examples have shown that the reverse is true. Economic development can stimulate and empower all pillars of the state and actually bring about security. Armed group members and ex-combatants are entrepreneurs by nature as they have courage and ambition. This characteristic of bravery and courage, if channeled in the direction of entrepreneurship and economic development, can turn a threat into an opportunity. The enthusiasm toward starting up their own businesses and the great business ideas ex-combatants have expressed in LPRD interviews show that we can turn them into agents of stability and socioeconomic development.

Our research also has shown that reaching the goal of socioeconomic development and the economic empowerment of young people through SMEs has many challenges that must be confronted. For instance, in a conflict like Libya’s, combatants are often unwilling to give up weapons while others are still armed. They fear that their armed opponents will seize control of state assets. Additionally, frustration rises after combatants lay down arms but do not see economic opportunities. These challenges must be addressed.

In Arabic, the word tumuh means ambition. It is our belief that many of the young people who participated in the Libyan conflict have immense ambition but need it to be channeled into something productive.

For that reason, the LPRD named its program Tumuh because it is designed to open the doors of entrepreneurship to ex-combatants. The program, launched in 2013, seeks to provide skills training, access to financing, legal advice, planning and marketing to help people establish and run a successful business. Tumuh was frozen for five years due to security concerns but restarted in November 2019.

The goal of Tumuh is to provide jobs and career opportunities for 70,000 ex-combatants. We believe that allowing these people to start their own businesses will not just help them, but also will help Libya’s overall economy.

The LPRD is dividing this plan into four phases:

We have contracted with local and international experts to conduct a nationwide economic map and feasibility study to determine which projects are best suited to each region of the country.

After the initial mapping stage, the team will look to establish sustained development. Initially, 80 business-related graduates were selected from the LPRD’s database to be trained as business consultants. Using regional experts, the 80 candidates undertook intense training in key topics such as marketing, sales, project management and business planning. They also spent time overseas for further training to gain a broader understanding of the subjects.

In addition, the LPRD management has opened four business centers with a goal of expanding to eight. These centers will act as a consultancy hub hosting business experts who can provide more individual support and advice on running businesses.

The LPRD has launched a partner program called Bina, which means “build” in Arabic. This program, established with the support of the Libyan Ministry of Economy and Industry, the Islamic Development Bank and private donors aims to support burgeoning small businesses. It offers training, mentoring and small-business incubation services.

The issue of militias and the spread of arms has been the main impediment to stabilizing and developing Libya. If the Libyan government prioritizes the creation of SMEs in its policies, legislation and programs, it can secure a peaceful transition for its youth from violence to peace and development. This transition will lead to stability and open the doors for more institutional and economic reforms. More stability also will mean the return of infrastructure development, foreign direct investment and the growth of the private sector.

SMEs and entrepreneurship will provide jobs and economic empowerment for neglected communities that would otherwise cause instability. We believe Tumuh, Bina and similar projects have a role to play. By showing ex-combatants that an investment in their own future can be an investment in the future of Libya, we believe the fighters who played a role in destabilizing the country can lead the way toward peace and prosperity.

Mustafa Elsagezli is the founder and general manager of the Libyan Programme for Reintegration and Development. He was deputy minister of the interior in Libya’s transitional government and the founding director of the Warriors Affairs Commission in 2011. 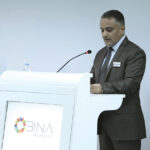 Mustafa Elsagezli is the founder and general manager of the Libyan Programme for Reintegration and Development. He was deputy minister of the interior in Libya’s transitional government and the founding director of the Warriors Affairs Commission in 2011.