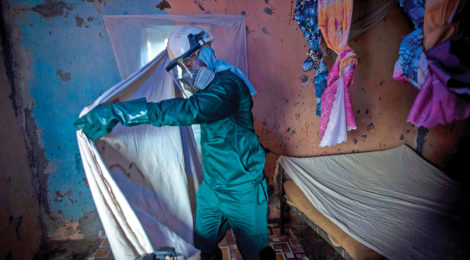 Bismark Owusu covers clothes and furniture with a sheet before mixing a mosquito-killing chemical with water. He then puts on safety gear, straps the spray pack to his back and methodically sprays walls, windows and corners of the room.

Owusu’s visit to Domeabra, a community in central Ghana, is his latest stop in the country’s fight against malaria.

The death of two of his friends from the disease spurs him on. “Why wouldn’t I help if others are dying?” he said. “I am here today helping to eradicate this deadly malaria.”

There were 216 million cases of malaria in 91 countries in 2016 and 445,000 deaths, according to the World Health Organization. About 90 percent of those cases and deaths were in Sub-Saharan Africa.

In Ghana, home to 28 million people, there were 4.8 million cases and 599 deaths in 2017, a marked drop from the 2,200 who died in 2011. Ghana is the first on the continent to introduce the large-scale use of a new insecticide against mosquitoes.

The nonprofit organization AGALMal is working in a laboratory at an old mining site in Obuasi. The program was expanded with support from global health initiative Unitaid and the Global Fund partnership.

Technologist Paul Osei-Bonsu said chemical resistance is a major issue. If a population of mosquitoes is sprayed and just one survives and reproduces, the resistance will be passed on. “If you use the same spray, over time you will have 90 percent of the population not dying,” he said.

Program Director Samuel Asiedu said the safe new chemical, SumiShield 50WG, should be more effective when rotated with others.

In 2006, after two years of the indoor spraying, the hospital in Obuasi saw a 75 percent decrease in malaria cases. In 2018, the program targeted the homes of 1.2 million people. “We are anticipating other chemicals to come on board by the end of the year so we can be rotating the use of chemicals to prevent resistance development,” Asiedu said.

Sprayers talk about the disease, which can lead to severe illness and death if not treated within 24 hours. “If I go to the whole house and someone does not want it, I have to sit the person and let them know the importance of the spraying because malaria kills,” Owusu said.