Nana Yaa Asantewaa and the War of the Golden Stool 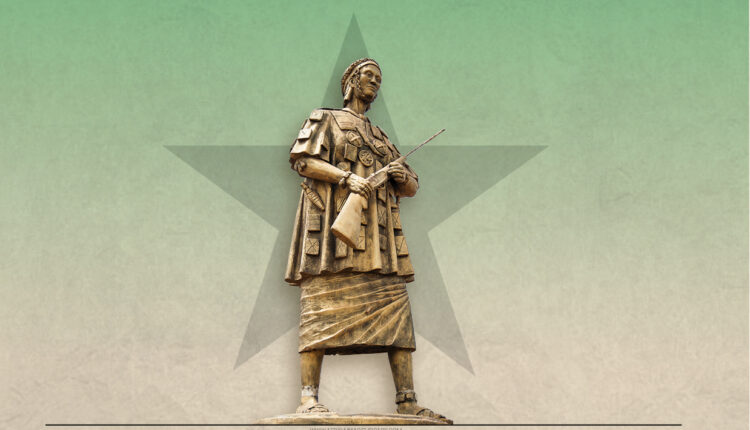 An Ashanti woman who shamed her tribe’s warriors into standing up for themselves more than 100 years ago has become a symbol of freedom for Ghana. Nana Yaa Asantewaa’s actions provoked the final Anglo-Ashanti war, known as the War of the Golden Stool.

In 1752, the British established a trading colony they called the Gold Coast on the Gulf of Guinea. It would become their hub for African trade which included gold, diamonds, wood, ivory, cocoa and grain. By the late 1800s, the British continued to expand their territory into local kingdoms and forced tribal leaders to submit to their authority.

The Ashanti fought back, beating the British Empire in the first two of what would eventually be five wars.

The final rebellion, known as the War of the Golden Stool, lasted about six months in 1900.

The Golden Stool was a symbol of Ashanti national unity. It was not a throne. When not in use, it was placed against a wall so that souls of dead Ashanti might rest upon it. It never touched the ground but always rested on a blanket. It was carried on a pillow, as only the Asantehene, the Ashanti king, was allowed to touch it. In some ceremonies, it sat on a throne of its own.

The final war began when the British governor, Sir Frederick Mitchell Hodgson, demanded the surrender of the Golden Stool as an admission by the Ashanti of their submission to British rule.

That is when Yaa Asantewaa made history.

She was born in 1840, one of two children. Her brother, Afrane Panin, became a tribal ruler while she grew up to be a skilled and successful farmer. When her brother died in 1894, Yaa Asantewaa used her position as Queen Mother to appoint her grandson as the new chief.

In 1896, the British exiled the Ashanti king to the Seychelles, along with Yaa Asantewaa’s grandson and other ruling members of the tribe. Yaa Asantewaa became regent of one of the districts.

When Hodgson demanded the Golden Stool, the remaining ruling members of the Ashanti met in secret to discuss a proper response. Yaa Asantewaa was there, since her position as Queen Mother meant she was the official guardian of the Golden Stool. She addressed the members of the council in a brief speech that has become a part of Ghanaian folklore. There are many versions of the speech, including this one:

Now I see that you are afraid to go forward and fight for our king. If you, the chiefs of Ashanti, are going to behave like cowards and not fight, you should exchange your loincloths for my undergarments.

She is said to have punctuated her speech by grabbing a gun and firing it in front of the assembled men.

The remaining leaders chose Yaa Asantewaa to be the leader of their fighting force. The Queen Mother took charge of an army of 5,000 Soldiers.

The rebellion was initially successful, with the Ashanti fighters storming a fort in Kumasi, where the British had sought refuge. Months later, the British governor sent sufficient troops to put down the revolt.

The British captured Yaa Asantewaa and 15 of her advisors and banished them all to the Seychelles. Yaa Asantewaa died in exile in October 1921. Three years later, the king and the remaining members of the exiled Ashanti court returned home. The king gave Asantewaa a proper royal funeral.

In 1957, what had been the Ashanti kingdom became part of Ghana, the first nation in Sub-Saharan Africa to gain independence.

Today, the War of the Golden Stool also is known as the Yaa Asantewaa War. She is remembered in an Ashanti song:

The woman who fights before cannons

You have accomplished great things

You have done well