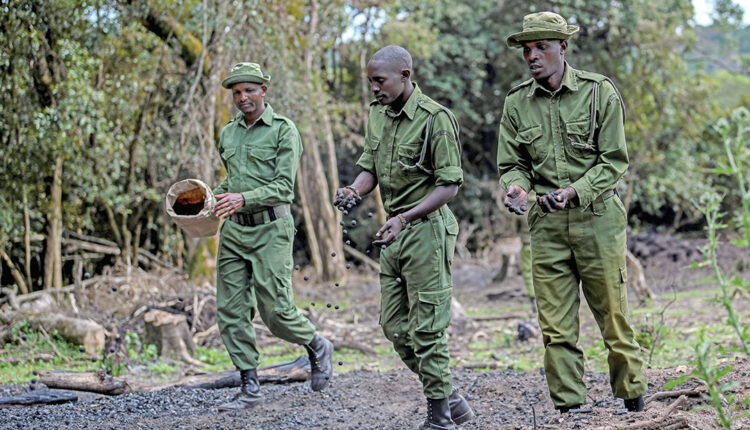 The round black pellets easily could be mistaken for animal dung. But they contain acacia seeds that help regrow Kenya’s depleted forests.

Mara Elephant Project rangers have scattered 22,000 “seedballs” around an illegally cleared corner of the Nyakweri forest bordering the Masai Mara wildlife preserve to give nature a chance to regenerate.

The forests have been chipped away for pasture, crops and charcoal. Nyakweri has lost more than 50% of its forest cover in the past two decades, according to Marc Goss, director of the project. Goss and his team have been spreading seedballs for three years.

Forests cover just 7% of Kenya’s land and are water reserves and a bulwark against desertification. Kenya loses 5,000 hectares of forest a year, the environment ministry said in 2018.

Developed by Seedballs Kenya, the charcoal dust casing protects the seed from being eaten before it germinates. The semiporous shell gives it a fighting chance even in arid conditions.

“You can throw them out year-round,” said Teddy Kinyanjui, co-founder of Seedballs Kenya. “It would sit there, wait for the rain to come, it washes the dust away, and then the seed is back to its natural state and will be able to start growing.”

Seedballs contain indigenous species, mainly varieties of acacias, the classic tree of the East African savanna, but one much sought after and felled for the quality of its wood.

Smallholder farmers wanting a cheap way to green their land buy seedballs, and major buyers donate 500 kilograms at a time to groups working in reforestation.

The company has sold 13 million seedballs since launching in mid-2016.

The germination rate is low, and some seeds can hibernate for years, making visible gains long in the making, Kinyanjui said. Only about 5% to 10% have yielded a shoot.

A Vision of a New African Trade Model