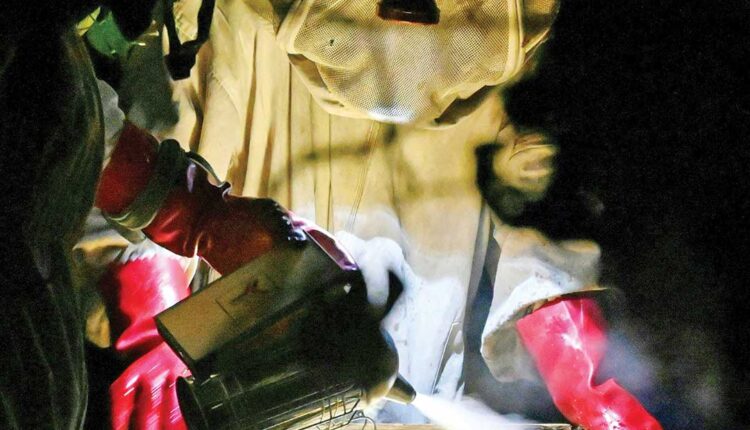 Night has just fallen in central Côte d’Ivoire, and the hour has come for two men, venturing forth in protective suits, veils and gloves, to collect honey from their bees.

The art of beekeeping has spread swiftly in Assounvoue, in the heart of the world’s top cocoa-producing country.

Farmers started taking up honey-making to supplement their income. They soon realized that their primary crops did better when pollinated by the bees. Word of the twin benefits spread fast.

“In West Africa, you have to harvest the honey at night,” said beekeeper Sebastien Gavini, co-director of Le Bon Miel de Côte d’Ivoire, which translates to “the fine honey of Côte d’Ivoire.”

“These bees are savage and aggressive; they don’t let you go. By working at night, you don’t get pursued by the bees, which means we don’t put people at risk.”

Modern beekeeping is only getting started in Africa, said Francois Silue, a member of the Ivoirian Cooperative Co. (SCI) at Katiola in the north, the source of the country’s most highly regarded honey.

“Our duty is to stop farmers from killing the bees, to change their culture,” said Silue, who was trained by Japanese and German specialist aid workers.

The SCI brings together about 50 beekeeping farmers. The platform estimates that 30 metric tons of honey are produced each year by about 100 members and several cooperatives.

Most of these people have kept their traditional roles as farmers, treating the production of honey as a secondary activity.  “Money is earned from the honey, and harvests are better because of better pollination,” said Mathieu Offi, who works alongside Gavini.

“The taste of the honey depends on what the bee has been foraging,” said Edvige Brou Adoua, a saleswoman at the Katiola cooperative.  “Honey from here is renowned because there are acacias and cashew nuts. It’s sweet.”