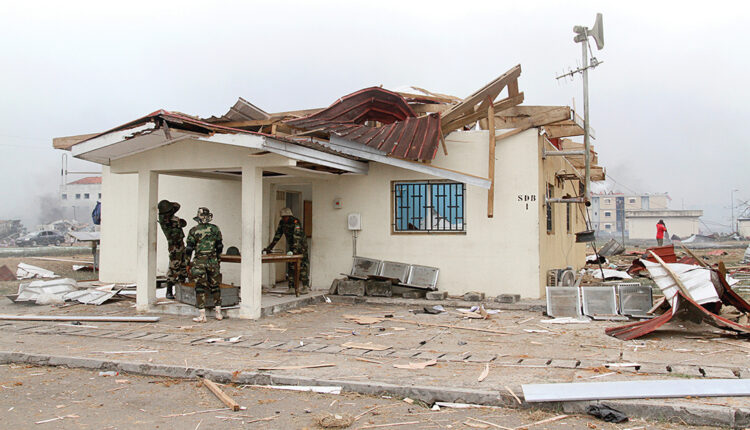 There was a thunderous blast, flames shot into the sky and a dark cloud of smoke formed over a tree line near a military base in Equatorial Guinea.

Then came another explosion. And another.

More than 100 people were killed, including children, and at least 600 more injured by the explosions at Nkoantoma Military Base in Bata on March 7, 2021. Responders blamed the explosions on negligent handling of dynamite. Military depots holding explosives ignited when neighbors at nearby farms lit fires, Deutsche Welle reported.

The military camp was built in a forest far from the city, but Bata, with a population of more than 250,000, grew rapidly between 2004 and 2016. The area around the base became densely populated.

The issue of cities expanding around ammunition storehouses is familiar across Sub-Saharan Africa. Simon Conway, director of capability at the Halo Trust, a nonprofit organization that removes debris left by war, said the ammunition should have been moved to a safer location long ago. He added that explosive storehouses with earth buttressing in well-maintained areas are less likely to detonate.

“The blast radius around an explosive storehouse should be within the perimeter of the military base to reduce the risk to civilians in the case of an accidental detonation,” Conway said.

Unplanned explosions of ammunition and explosives stockpiles are a recurring problem with about 15 such explosions globally each year. Explosions at munitions sites caused nearly 30,000 fatalities globally between 1979 and 2019, Small Arms Survey reported.

The most common factors in the blasts were lightning strikes and extreme heat, human handling errors, sabotage, fire, electrical issues, and chemical reactions within the stored ammunition.

The Institute for Security Studies has suggested that governments test their stockpiles of munitions, ammunition and weapons for stability and properly handle any material that does not perform to specifications.

At the request of Equatorial Guinea’s government, technical experts from the Geneva International Centre for Humanitarian Demining are working with members of the French Explosive Ordnance Disposal, U.S. Embassy and Golden West Humanitarian Foundation to support demining efforts and investigate the cause of the explosions, ReliefWeb reported.

Experts also will work to identify risks to the population and environment, address ammunition storage and handling concerns, and provide risk reduction and mitigation recommendations to national authorities.