Shaka Zulu and His Deadly Spear 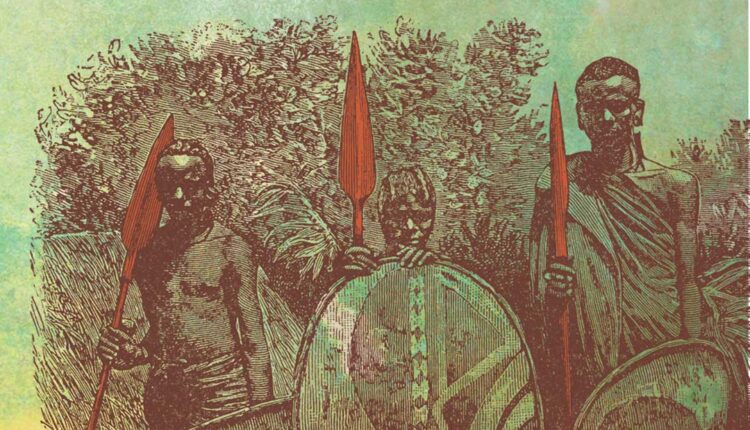 For a time, skirmishes between rival Nguni tribes in what is now South Africa were all bluster and no battle.

Opposing fighters would stand 35 to 45 meters apart, each armed with an assegai, a 1.8-meter spear, and a tall shield called an isihlangu. The warriors would throw the spears at each other, but because of the distance and the arc of the tosses, the spears were easily dodged. The “fighting” generally ended when both sides had thrown all of their spears, with no one injured.

Shaka Zulu of the Zulu tribe of the Nguni found the ceremonial spear-tossing to be a waste of time. In about 1800, Shaka fashioned a new type of spear called an iklwa. It was a stabbing weapon — more like a sword — shorter at about a meter and with a broader blade. Armed with this new weapon, Shaka would chase down an opposing warrior and hook shields, forcing his opponent’s protection aside. Shaka would then stab his rival, usually fatally.

The traditional throwing spear was not entirely abandoned. It was used from long range to attack enemy formations before warriors closed in for hand-to-hand combat using the iklwa. The Zulu warriors also carried long-handled clubs.

When Shaka trained his followers with the new weapon, they became a dominant force. He also developed a set of attacking tactics called the buffalo formation. His main body of warriors were “the chest,” confronting the enemy head on. Two flanks known as “the horns” tried to surround the enemy, while a reserve called “the loins” remained behind in case the enemy tried to escape.

Shaka became a master of tactics, position and deception. In battle, he was ruthless. His was a system of total warfare. He taught his fighters to take no prisoners and instead kill every enemy to the last man. He was equally ruthless with his own tribe; every Zulu male was expected to be a warrior, and if a man failed to meet Shaka’s exacting physical requirements, he was killed.

Some historians have described the Zulus as “the Spartans of Africa.” It is said that Shaka forced his warriors to discard their sandals and harden their feet so they could run barefoot — faster and more agile.

Before the time of Shaka, the Zulus were a small tribe, consisting of about 1,500 people in a small territory of 26 square kilometers. By 1828, Shaka ruled 250,000 people and commanded an army of 40,000 warriors. He was responsible for the deaths of as many as 2 million people during his reign.

Neighboring and conquered tribes adopted his military methods and cruelty, leading to 25 years of chaos, slaughter and genocide, even after his death. This era is now known as the Mfecane, or the Crushing.

Shaka and his mother had been abandoned in his youth, and he sought revenge his entire life. His anger eventually turned him into a madman. On one occasion, he had 7,000 Zulus massacred for not properly grieving during a ceremony. In September 1828, his half-brothers assassinated him.

The memory of Shaka lives on in some dozen biographical books, as well as a television miniseries and a movie.

His legacy is clear: He changed the nature of warfare in Africa and made the Zulu tribe known throughout the world.