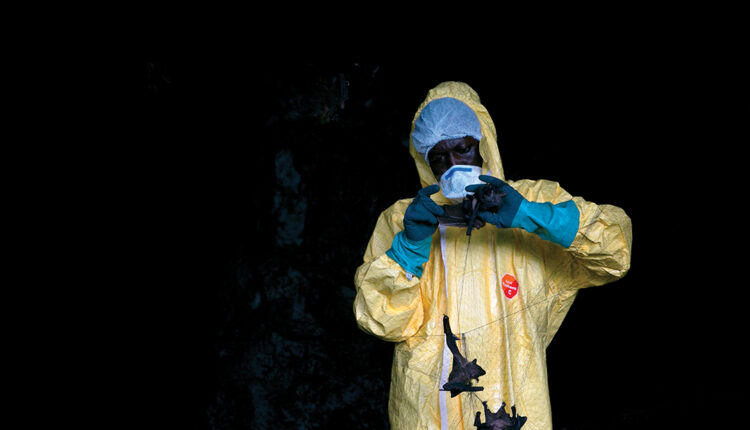 Six men in yellow biohazard suits walk in suffocating heat toward a cave in the heart of the Gabonese jungle. Their quest: to unlock new knowledge on how pathogens like COVID-19 leap the species barrier to humans.

In the cave is their goal: a colony of bats.

“Our job is to look for pathogens which could endanger humans and understand how transmission happens between species,” said Gael Maganga, a professor at the University of Franceville.

Bats can host viruses that do not harm them but can be dangerous to humans, often crossing via other animals. COVID-19 is the latest microbe believed to have taken the zoonotic path from animals to humans.

Maganga calls on the team to stretch a net across the cave’s entrance. One scientist moves forward, shining his flashlight inside. Bats fly out and get caught in the net.

Team members use sterile swabs to take samples from the bats, which then will be analyzed for emerging pathogens.

“Human behavior is often the cause of an emerging virus,” Maganga said. “Today, with population pressure, intensified farming or hunting, contact between humans and animals is more and more frequent.”

An October 2020 report by the Intergovernmental Science-Policy Platform on Biodiversity and Ecosystem Services said there were up to 850,000 viruses in animals. Seventy percent of emerging diseases circulate in animals before jumping to humans, and each year about five new diseases break out among humans, it said.

Maganga also has uncovered several coronavirus strains circulating among bats, including some that are close to COVID-19.

Despite the obvious risk, people still come to the area to hunt for antelopes, gazelles, monkeys and bats.

In April 2020, Gabon banned the sale of bats and pangolins, another species deemed to be a potential COVID-19 vector. But for many nearby villagers, poverty seems to trump any danger.

“In one night, I can earn a month’s money,” said Aristide Roux, a 43-year-old hunter.