A Penchant for Chaos

Long Known as Africa’s ‘Narco-State,’ Guinea-Bissau’s Reputation Will Be Tough to Shake

The former Portuguese colony of Guinea-Bissau has been dogged by unrest and instability since its independence in 1974. The government was overthrown about six years later, and its history has been stained by coups, attempted coups and governmental chaos ever since.

Add to that infamy the epithet “narco-state,” meant to sum up a criminal enterprise that for years has allowed — in fact, enabled — the free flow of narcotics into national ports on a transnational journey greased by official collusion. The International Monetary Fund defines a narco-state as a nation in which “all legitimate institutions become penetrated by the power and wealth of traffickers.”

A United Nations official in the capital, Bissau, estimated in 2018 that at least 30 metric tons of Latin American cocaine enters the country each year, most of it on its way to Europe. Large supplies are flown in, and some enter via legal and illegal international fishing vessels. Sometimes, local fishermen bring it ashore. The military sometimes transports it across borders.

The nation’s military often has played a significant role in politics, including coups, the most recent of which was in 2012. The military also has participated in narcotics trafficking. In one high-profile case in 2013, a New York grand jury indicted Gen. Antonio Indjai, at the time the nation’s Army chief of staff, on charges of trafficking Colombian cocaine and providing weapons to anti-government insurgents there. He had taken power during the 2012 coup. He was sacked in 2014.

Former Rear Adm. Jose Americo Bubo Na Tchuto, arrested at sea in a U.S. drug sting on charges of trafficking cocaine to the U.S., pleaded guilty in 2014 and was sentenced to four years in prison.

Even Guinea-Bissau’s geographical peculiarities make it attractive to drug traffickers. The nation’s coastline is largely composed of the Bijagos Islands, 88 land masses that mostly are uninhabited. Some have been used by drug traffickers to deposit and store illegal drugs.

Despite the nation’s history and culpability with drug trafficking, there have been some significant drug busts in Guinea-Bissau in recent years. In September 2019, Bissau-Guinean police seized more than 1.8 metric tons of cocaine hidden in grain bags that arrived by sea in the nation’s northwest, Reuters reported. The two-week Operation Navara investigation resulted in the arrest of six Bissau-Guineans, three Colombians and a Malian. It was the biggest drug operation in the nation’s history, and it led to successful prosecutions and prison sentences.

About six months earlier, authorities had seized almost 800 kilograms of the drug in Operation Carapau. Police arrested one Bissau-Guinean, two Nigerians and one Senegalese after finding the cocaine in a refrigerated truck registered in Senegal, Agence France-Presse reported.

The resulting sentences and prison terms in Carapau marked the first time in recent years that the nation’s justice system successfully prosecuted a big drug case, according to the United Nations Office on Drugs and Crime (UNODC).

Both drug busts are positives in a country rife with many negatives. But when contrasted with the continuing poverty, unrest and political chaos that persist even now, it’s hard to demonstrate that Guinea-Bissau has successfully transitioned out of its reputation as a narco-state, according to several studies and reports. The nation of nearly 2 million has a steep hill to climb, and it’s clear that it won’t be able to scale it alone.

Years of instability attracted a United Nations presence after a civil war in 1998-1999. The U.N. opened its Peacebuilding Support Office in Guinea-Bissau. Ten years later, it gave way to the U.N. Integrated Peacebuilding Office (UNIOGBIS), which continued through the end of 2020.

A U.N. Country Team since has worked with other U.N., regional and international partners to build peace and stability in the nation. “Guinea-Bissau has made remarkable progress in reforming and strengthening its state institutions and maintaining relative stability,” Bintou Keita, then assistant secretary-general for Africa, said at a December 11, 2020, ceremony marking the end of the UNIOGBIS mission. “The repositioning of a United Nations mission team to the country is proof of this progress.” 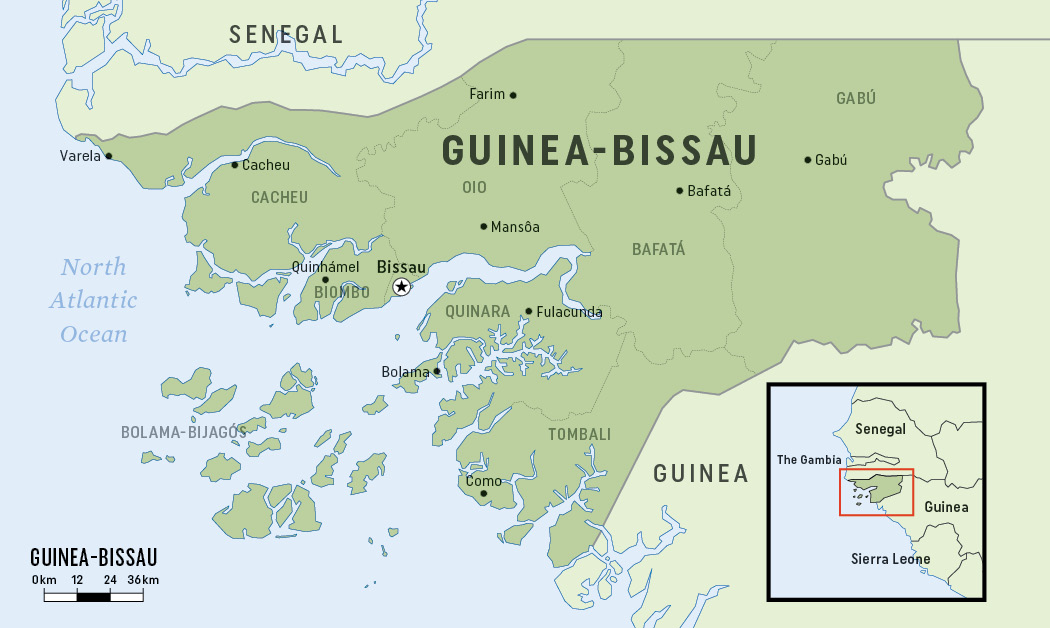 Keita and Special Representative of the Secretary-General Rosine Sori-Coulibaly said the political mission helped enable free elections, resolve political disputes, fight drug trafficking and advance human rights, including the participation of women and young people in politics, according to DPPA Politically Speaking, the online magazine of the U.N. Department of Political and Peacebuilding Affairs.

The U.N. will keep working to help Guinea-Bissau reach development goals by addressing poverty, injustice, gender inequality, child protection and other issues, according to the magazine.

Still, many challenges remain. The huge drug busts in 2019 would seem to indicate that traffickers still have a network of willing compatriots on the ground in and around Guinea-Bissau and that capacities to strangle the drug pipeline have not yet been achieved. Also, some say continuing political unrest associated with the 2019 presidential election could leave the nation vulnerable to continued drug trafficking.

“Cocaine trafficking — as all the drugs — you have traffickers who want to maximize profit while avoiding risk,” Dr. Angela Me, chief of the UNODC Research and Trend Analysis Branch, said in a video. “The dynamic of trafficking organizations is always to find the point of less resistance.”

For that reason, any nation with a wide range of weak government, legal and law enforcement institutions will be more vulnerable to co-opting by criminal organizations such as drug cartels and traffickers. Guinea-Bissau has been and continues to be such a country. But the UNODC has worked alongside government authorities to fight the drug trade.

Despite persistent governmental instability, the UNODC said “minimum political conditions” were reached for it to again help the government fight drug trafficking and organized crime.

In June 2018, then-President José Mário Vaz asked UNODC to help strengthen all aspects of the criminal justice system to address drugs, organized crime, money laundering and corruption. Indeed, the UNODC reported that Guinea-Bissau had “shown a renewed commitment to engage in the fight against drug trafficking and organized crime” through the launch of the AIRCOP Joint Airport Interdiction Task Force (JAITF) in April 2018.

The multiagency Airport Communications Program (AIRCOP) seeks to disrupt criminal networks by helping participating airports detect and intercept drugs, illicit materials and high-risk passengers in countries of origin, transit and destination. Since the UNODC-Interpol-World Customs Organization initiative set up the JAITF at Osvaldo Vieira International Airport in Bissau, there have been a record number of drug seizures there, the UNODC reports.

These developments are overshadowed by continued political chaos. The 2019 national election resulted in anything but a smooth transfer of political power. Incumbent Vaz did not advance past the first round of voting in November 2019. Former Prime Minister Umaro Sissoco Embaló won the second round in December 2019. Embaló was sworn into office in February 2020, but the majority party of his election rival, Domingos Simões Pereira, claimed the election was fraudulent and swore in its own president — Cipriano Cassamá, the parliamentary speaker — who resigned after just one day in office, citing death threats, according to a BBC report.

Vaz was the first president to serve a full term in office since the nation gained independence. His one five-year term saw nine prime ministers serve, one for only 10 days. The next election raised political tensions and at one point resulted in two men serving as president simultaneously, if only for a day.

Amid this chaos is evidence that military officials remain closely ensconced with political players, a condition similar to those in 2012 when high-ranking military officials such as Indjai actively participated in the drug trade, according to a May 2020 article for the Global Initiative Against Transnational Organized Crime by Mark Shaw and A. Gomes. The article also notes that the global COVID-19 pandemic may give regional and international observers reason to divert their attention, leaving the nation free to resume business as usual.

Included in the recommendations offered by Shaw and Gomes for addressing Guinea-Bissau’s instability is to build a national dialogue among government, military and civil society representatives. One option could include a “truth commission” that could offer amnesty to culpable actors who speak openly about their involvement in drug trafficking and other offenses.

“Those who do not would be subject to prosecution, underscoring that, in the final reckoning, there would be no impunity for those who have been involved in drug trafficking and have undermined the long-term political, social and developmental prospects for Guinea-Bissau,” the authors wrote.