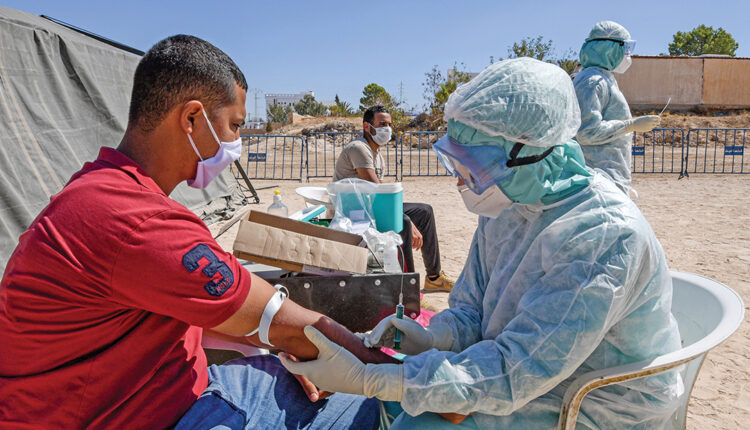 When the COVID-19 pandemic spread to Malawi in early April 2020, the nation known as the “warm heart of Africa” for the kindness of its citizens faced a potential crisis. The fast-spreading respiratory disease could easily have overwhelmed the low-income country of more than 20 million people.

“COVID-19 could have a disastrously high toll in Malawi,” said Maria Jose Torres Macho, United Nations resident coordinator for Malawi. “Even a fairly low number of cases could overwhelm the health system, cause food shortages and reverse the path of progress the country has been on in recent years.”

By early in 2021, Malawi had seen 7,110 COVID-19 cases and 199 deaths. Although Malawi and its neighbors likely will have to grapple with the pandemic for months to come, the nation’s military, the Malawi Defence Force (MDF), has shown that it is ready and willing to help civilians blunt the effects of the virus by rendering various levels of assistance.

“So far, the MDF is enjoying massive public trust and support, not only because of the logistical help that it is providing to the National COVID-19 Response Team, but also because of the professional handling of recent security issues surrounding the general public,” said Capt. Wilned Kalizgamangwere Chawinga of the MDF Public Information Office.

When it comes to infectious diseases such as COVID-19, doctors, nurses and public health officials are the ones who fight on the front lines. They don personal protective equipment and risk their lives to save patients from the precarious and often deadly effects of the new virus.

Typically, national militaries and security forces have a different mandate. They are charged with protecting national sovereignty and borders. But they can play a vital role in fighting COVID-19 and other disease outbreaks.

Some help comes in logistics, such as transporting and distributing medical supplies. Other times, national security forces protect medical personnel, who often face danger in the stressful and fraught conditions of a pandemic.

Regardless of the help rendered, Soldiers and security officials all over the continent — from Malawi to Ghana, from Kenya to Lesotho — are doing their part to help civilian health authorities stamp out COVID-19.

In peacetime, African militaries primarily are concerned with securing national borders and training for deployments and peacekeeping missions. In a crisis such as the COVID-19 pandemic, borders become all the more crucial. In some regions, informal crossings are frequent and routine. The prospect of such crossings bringing in new virus cases makes the need for enforcement and oversight vital.

Perhaps nowhere in Africa has that been more important than in Lesotho, a small landlocked kingdom surrounded by South African territory. South Africa has had the most COVID-19 cases on the continent.

Many blue-collar workers live in Lesotho and work in South Africa, but they have no official passports. When South Africa locked down, those workers returned to Lesotho at whatever point was convenient to them, said Capt. Nolukhanyo Ndleleni of the Lesotho Defence Force (LDF).

Lesotho was the last nation on the continent to report a COVID-19 case, doing so on May 13, 2020, months after the virus already had infiltrated other African nations. Lesotho’s first case, thought to have originated in the Middle East, was detected about a week after the country started easing initial lockdown measures that began in late March.

The LDF began supporting civilian efforts at the border on April 1, 2020, through Operation Save Life, Ndleleni told ADF by email. The ongoing operation has two phases. The first phase had Soldiers patrolling borders to ensure that anyone coming into the country was screened and tested. It also helped enforce the initial government lockdown.

Phase two began after COVID-19 cases were confirmed and the lockdown was lifted. Soldiers helped make sure that civilians adhered to rules on social distancing, mask wearing and gathering sizes. They also helped with contact tracing as cases increased.

“LDF deployed along the borders to prevent illegal crossings and to screen and direct all those who enter the country to established health centers for testing and quarantine,” KV Khoabane, LDF legal officer, told ADF via email. “Only the LDF could do this duty as it had the bulk of force that was readily available, and our LDF Medical Service was able to give them sufficient briefing or orientation on how to fight the pandemic.”

This work put LDF forces in close contact with Basotho civilians, who helped keep Soldiers informed about unauthorized border crossings. Soldiers then gathered people and transported them to health centers for testing and quarantine. “This benefited LDF and its Soldiers a lot as this was one of the rare opportunities where the Soldiers and civilians had to work together to fight a common enemy,” Khoabane said. “It improved military civil relations and helped the Soldiers to give the society the good side of the Defence Force.”

Soldiers in the MDF also have supported civilian authorities in several ways, perhaps most notably by offering logistical transportation support. Chawinga told ADF that the MDF supports civilian responders by ferrying Malawians affected by COVID-19 to testing and quarantine facilities across the country. This includes those who have flown in from elsewhere to Kamuzu International Airport, who are then transported in trucks with large seating capacities on behalf of the National COVID Response Team.

The MDF also worked alongside the Malawi Police Service and the Department of Immigration and Citizenship Services in Operation Pewa. In that operation, troops deployed along Malawi’s borders to control illegal entry and to raise awareness about COVID-19 prevention.

Having Soldiers work on public health projects doesn’t just improve the public’s view of its military. Soldiers also benefit. “During these operations, Soldiers are developing a sense of confidence, experience, trust and patriotism,” Chawinga said. “This personal trust and experience is building healthy careers for Soldiers.”

MDF medical practitioners also have been busy training and preparing troops on how to avoid contracting COVID-19 and how to safely interact with COVID-19 patients, including using proper hygiene, social distancing and wearing masks.

It’s no surprise that a pandemic disease outbreak leads to security threats. Health workers’ safety was a constant concern for those addressing the West African Ebola pandemic in 2014-2016. Outbreaks often require government and medical authorities to interact with people in remote villages who may be unfamiliar with modern health services and susceptible to rumors and misinformation. Extra security measures are all the more important in Sudan after years of war and sanctions weakened the nation’s health care system.

In May 2020, Sudanese authorities announced they would establish a police force to protect health facilities and health workers as attacks mounted during the pandemic.

Doctors threatened to strike because of growing security concerns. In April 2020, rioters threatened a hospital in Omdurman, across the river from the capital, Khartoum, after a rumor spread that COVID-19 patients would be treated there, The Associated Press reported.

One day in May, three attacks targeted health workers and a hospital in Khartoum, leading to a suspension of services.

The Ghana Armed Forces (GAF) also has worked with civilian authorities to mitigate the spread of COVID-19 through security measures, among other things. In the spring of 2020, military personnel had been fumigating and cleaning public markets before a lockdown of the capital, Accra, and Kumasi and surrounding areas, according to the GAF.

Once the lockdown began, the GAF helped enforce it through Operation COVID Safety. This effort deployed naval vessels to prevent illegal entry from the sea. Pilots also flew reconnaissance missions and airlifted medical supplies and samples to aid in virus testing.

In July 2020, a task force composed of the GAF, the Accra Metropolitan Assembly and Zoomlion Ghana Limited, a Ghanaian waste management and sanitation company, began a weeklong public awareness campaign on Accra’s sanitation bylaws and COVID-19 protocols in advance of enforcement measures.

Task force members broadcast public messages via loudspeaker to let them know that they must keep their surroundings clean and wear masks to avoid prosecution, according to a Ghana News Agency report.

THE IMPORTANCE OF EDUCATION

In Kenya, Soldiers have spent a lot of time sanitizing public spaces, including military installations, health facilities and other areas. Members of the Kenya Defence Forces (KDF) also have worked to educate themselves and others.

In September 2020, more than 50 KDF medical practitioners from the three services and the Defence Forces Memorial Hospital spent three days at a COVID-19 medical conference at the International Peace Support Training Centre in Karen, Nairobi. The purpose of the conference was for medical personnel to share their experiences and learn the latest information for managing and controlling infectious diseases.

“It is my sincere hope that among the lessons that KDF medical fraternity has learnt during the recent COVID-19 outbreak include emergency planning, preparation, training, coordination, protective equipment use, containment measures, control and medication,” Dr. Ibrahim Mohamed, principal secretary of the Ministry of Defence, said in a news release.

Kenyan Soldiers also are educating civilians as part of the African Union Mission in Somalia. KDF Soldiers serving in the Dhobley region shared COVID-19 prevention measures with Jubaland Security Forces, a state-level paramilitary force based there, and others.

KDF Soldiers taught basic hygiene such as frequent hand-washing, social distancing, wearing of face masks, and how to cough and sneeze in a way that minimizes the virus’s spread. The awareness efforts are combined with other work to mentor Somali security forces through joint operations against al-Shabaab.

TESTING AND OTHER SUPPORT

Testing is one of the best ways to assess and control the spread of COVID-19. The logistical power of national militaries makes their involvement in testing valuable.

The KDF undertook mass testing of its own personnel to control spread of the disease. In June 2020, the Kenya Navy tested its personnel and their families as part of an effort called Komesha Korona. Workers also tested KDF forces at Defence Headquarters and in barracks across Nairobi. Officers, Soldiers, military families and Defence Ministry civilian staffers have access to testing at various medical centers.

The Tunisian Armed Forces showed the importance of military logistics during the pandemic in April 2020 by flying round trip from Tunis to Hong Kong to pick up medical and sanitary equipment. The 22,000-kilometer, 48-hour trip was the longest the Tunisian Air Force ever has flown, according to the Tunisian news site Webdo.

The KDF has aided civilians in other ways during the pandemic. In October 2020, the KDF airlifted teachers into the Lamu region by helicopter. “Air assets under Operation Amani Boni lifted teachers to Milimani, Mangai, Basuba, and Mararani Primary Schools during the first week of learning post the COVID-19 nationwide closure of schools,” according to a KDF statement. “The teachers were happy to resume their duties because the schools had just reopened in January 2020 after 6 years of closure due to insecurity.”