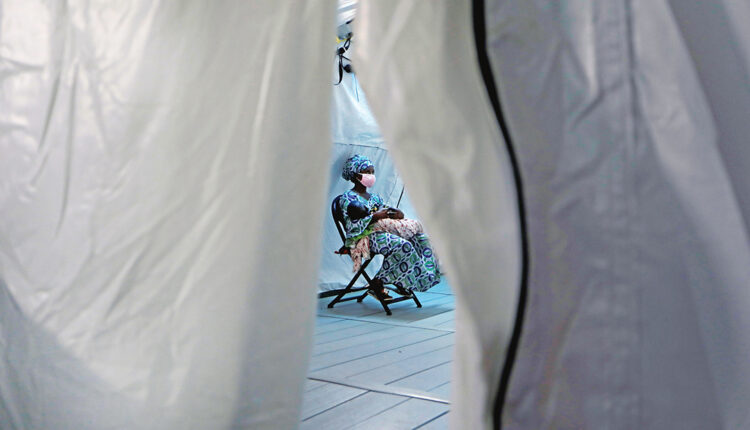 When the first cases of COVID-19 arrived in Senegal, the military jumped into action.

In March 2020, the Senegalese Army traveled to Touba, 190 kilometers east of Dakar, and built a mobile field hospital to handle an anticipated rise in COVID-19 cases that threatened to overwhelm the local hospital.

In a matter of days an empty field was transformed into a 14-tent, 690-square-meter compound in which doctors could perform surgery and diagnose and treat hundreds of patients a day. All treatment was offered to the public for free.

It was an unusual mission for unusual times.

Touba, a city of 1.5 million, is one of the holiest cities for Sufi Muslims and hosts an annual festival that draws millions of pilgrims. Although the city saw several case spikes throughout the year, Senegal avoided the direst outbreak forecasts, and the Army was credited with playing a key role in treating the public.

“The treatment is free with the only limit being the means we have available,” Diang said. “The consultation is free, the radiological services are free, the laboratory analysis is free. … We will steadily offer care, and at each step we will evaluate what else is needed.”

Hospital in a Box

Senegal was one of four countries that received United Nations level II field hospitals from the United States. The other countries are Ghana, Rwanda and Uganda. Each country was scheduled to receive two hospitals.

The modular hospitals can be packed into shipping containers and deployed along with troops on peacekeeping missions. They were donated as part of the U.S. African Peacekeeping Rapid Response Program (APRRP), a $110 million annual effort to help African militaries rapidly intervene in crises on the continent.

Each of the hospitals is valued at about $3.5 million.

“It is designed to provide a rapid response to any crisis, whether it be a geopolitical destabilization or a disease outbreak,” said Dr. Charles Beadling, a military medicine professor at Uniformed Services University, who helps train people to use the mobile hospitals. “Rather than relying on the international community and the delays in responding to the continent, APRRP provides an on-the-continent rapid-response capability.”

Each hospital has 20 beds for inpatient care and is equipped with devices to monitor vital signs. The hospitals have a surgical room, intensive care units and diagnostic imaging tools. Each has water purification, generators and sewage disposal capabilities. It takes one to three days to set them up.

“They are self-sustaining facilities. They have their own generators, they have everything,” said U.S. Air Force Maj. Mohamed Diallo, an international health specialist with the Office of the Command Surgeon at U.S. Africa Command (AFRICOM). “They can set it up anywhere and be fully operational without the need to tap into any external source.”

Once the hospitals are delivered, AFRICOM provides a multiphase training program on skills including field sanitation, clinical ultrasound, infection control and tactical combat casualty care. “This is not just one-time training,” Diallo said. “We train them so they can train their own. We don’t just come in and train one group and say we’re done. We are institutionalizing each of these programs so they can be used appropriately during deployment.”

Although travel has been halted due to the pandemic, trainers from AFRICOM have continued to provide virtual courses on critical care and COVID-19 patient management that incorporates the latest lessons learned from around the world.

In addition to these level II hospitals, the U.S. donated 14 level I field hospitals equipped with negative air pressure systems to stop infected air from leaving treatment rooms. These hospitals have gone to countries such as Angola, Djibouti, Ethiopia, Ghana, Kenya, Morocco, Niger, Nigeria, South Africa and Tunisia. These hospitals typically are being operated by the ministry of health in the recipient country.

Preparing for the Worst

The hospitals were never intended for use during a domestic pandemic, but they’ve proved valuable.

U.S. trainers worked with Soldiers from the Uganda People’s Defence Force (UPDF) in May 2019 to practice how to set up and take down the hospitals. The training included a mass casualty exercise to test the UPDF’s ability to treat and stabilize wounded Soldiers.

By early 2020, the UPDF had 320 people trained to operate the hospital. That put them in a strong position once COVID-19 struck.

“Our preparations started a long time ago; when the first epidemic broke out in China, we started preparing from then,” Brig. Stephen Kusasira, director of medical services in the UPDF, told local media. “Everyone knew it was a matter of time until this thing reaches here.”

The UPDF set up the hospital at the Bombo Military Barracks north of the capital, Kampala. And although Uganda experienced a relatively small number of COVID cases and 228 deaths as of mid-December, leaders say the experience of responding to a pandemic has been valuable.

“Tomorrow there could be another emergency that requires the establishment of a mobile hospital,” Kusasira said. “So it’s a model that we use in the UPDF to have both the static centers but also to develop our mobile capabilities. Should we deploy somewhere, we should be able to move with a hospital or health center or a structure where we can give them health care services.”

In Ghana, the Ghanaian Armed Forces (GAF) set up the hospital on the football pitch at the El Wak Stadium in Accra. The tents were arranged to include isolation facilities for the sickest patients and changing rooms in which doctors and nurses could don and later dispose of personal protective equipment. The hospital handled overflow patients from the nearby 37 Military Hospital.

“The military tends to be low profile, so for some time you haven’t heard much about us, but … we’re doing a lot here, and we need the support of the public to keep up with the influx of patients,” GAF Col. Thomas Aquinas Gbireh, commanding officer at the hospital, told Citi TV.

One of the biggest needs was personal protective equipment, which was in short supply. In August 2020, the U.S. responded by donating 10,000 N95 face masks, 1,600 hospital gowns, 2,000 liters of liquid sanitizer and other medical goods. Maj. Michael Kummerer, chief of the Office of Security Cooperation at the U.S. Embassy in Ghana, called the donation “a friend lending a helping hand in a time of need.”

“We recognize the absolutely critical role that the GAF is playing in Ghana’s COVID-19 response, and we’re happy to support them in this noble cause,” Kummerer said.

Although many parts of Sub-Saharan Africa were not affected as severely by COVID-19 as initially feared, military health professionals said it was an important reminder of the role security forces must play in a national crisis.

“We are preparing for the worst scenario should it happen,” Kusasira said.

Part of that preparation means strengthening preventive measures so health systems don’t get overwhelmed in the future.

“We should not be looking as a country just at treatment centers; we should focus on strengthening the prevention aspects so that we don’t have very many people that overwhelm the capacity of the country,” Kusasira said.

Examining a Virus from Another Era