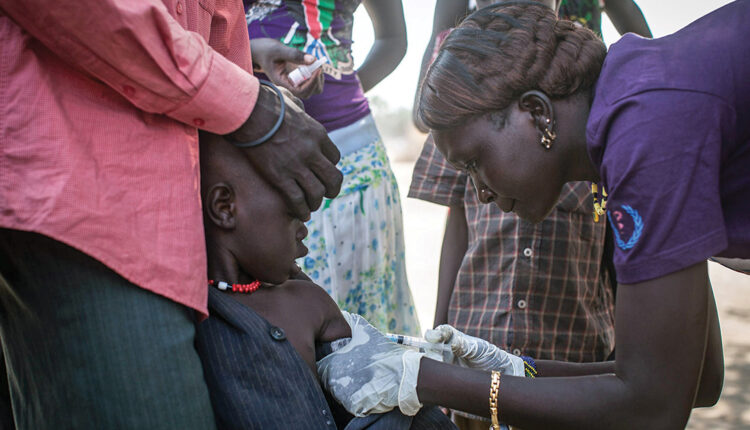 Shejirina Moni sits beside her children in front of their makeshift home in Juba, South Sudan’s capital. Six of her children have died of various illnesses. She has three surviving.

Moni’s story highlights a sad fact: Millions of children in South Sudan do not get routine vaccinations. They are vulnerable to preventable illnesses.

In addition to dealing with the COVID-19 pandemic, the country is battling a severe measles outbreak, with more than 4,700 confirmed cases and 26 deaths since January 2019.

The government of South Sudan has partnered with the World Health Organization; UNICEF; Gavi, the Vaccine Alliance; and ONE, the anti-poverty campaign co-founded by Irish musician and celebrity-activist Bono; to carry out a nationwide measles vaccination drive that aims to reach 2.5 million children.

The campaign launched in February 2020 at the only pediatric medical facility in the country, Al-Shabbah Children’s Hospital. Situated in the heart of Juba, it provides health care to more than 5,000 people monthly, reaching some of the poorest people in the city.

Public health specialists recommend that coverage not fall below 90%. It’s crucial to maintain that standard for measles, which is highly infectious.

One reason why childhood immunization coverage against measles is low in the country is due to the logistical challenges involved in keeping vaccines at near-freezing temperatures. It’s not easy to do in South Sudan, the least electrified country in the world, where temperatures often soar above 40 degrees Celsius.

“We are able to keep these things at the correct temperature in the hospital here. That is the most important thing,” said Dr. Felix Nyungura, the hospital’s executive director. “The public electricity has not yet arrived in our place here. Although in some places it is there. But now we are depending on solar power and electricity from a generator.”

Rwanda is First in Africa to Administer Pfizer Vaccine