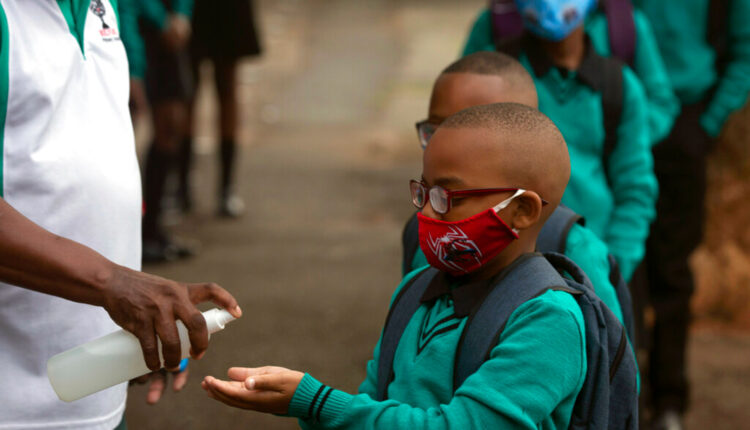 As vaccines for COVID-19 roll out across Africa and around the world, medical experts continue to play cat and mouse with new variants of the virus.

“We are experiencing science in real time,” Dr. Kerrin Begg, a public medicine specialist at the University of Cape Town, South Africa, told the BBC.

As viruses replicate, they make mistakes — genetic typos. Most of these mistakes have no effect, but others create variants that help the virus survive and spread. The more infections, the greater the chance for viable variants.

The U.K. and South African variants are not deadlier than the original virus, but they spread more easily, driving up infection rates, hospitalizations and death counts recently.

“Most people on the continent know someone who has died of COVID in this second wave compared to the first wave,” Dr. John Nkengasong, director of the Africa Centres for Disease Control and Prevention (Africa CDC), said during a recent news conference.

Where are variants coming from?

As scientists track COVID-19 variants, they’re showing the world the power of evolution in real time. The rapidly replicating virus is in a race for survival against the human immune system.

Each new infection provides an opportunity for the virus to slip through the barriers created by vaccines and natural immunity.

“We are now getting reports of people getting reinfected with the new variant of the virus,” Dr. Soumya Swaminathan, the World Health Organization’s (WHO’s) chief scientist, told a news conference.

Healthy people might spend days or weeks fighting off the virus, but people with weakened immune systems — such as those living with HIV or taking immunosuppressant drugs — spend months fighting it. That gives the virus many opportunities to fine-tune its genetic code against a human immune system.

Early research into the South African variant shows its mutations help it move within the population.

The ease with which the new variants spread already is overwhelming hospitals across Africa and straining oxygen supplies, Nkengasong said.

Despite that, the new variants have not yet become the dominant form of the virus in any country. So Africa CDC and the WHO Africa regional office say countries should keep using existing vaccines to protect their citizens.

“Our strategy is not to throw away 100 million vaccine doses,” Nkengasong said. “This is a good vaccine without the variant. And the variant is only a problem if it is overwhelming in the country.”

Although a vaccine against all forms of COVID-19 would be wonderful, the priority needs to be placed on preventing severe cases and hospitalizations, Dr. Matshidiso Moeti, head of the WHO’s regional office in the Republic of the Congo, said recently.

So far, vaccinations appear to be doing exactly that.

“With the majority of clinical trials, there’s a clear protection against severe disease,” Swaminathan said. “Whether it is going to protect completely against infection is not so clear.”

There’s also the possibility that those who receive the vaccine could still carry the virus in their systems and spread it without getting sick, she said.

To avoid that possibility — and to reduce the chances of creating yet more virus variants — health officials say everyone needs to continue to wear masks, wash their hands and maintain social distance.

“These measures work,” said Maria Von Kerkhove, the WHO’s technical lead on COVID-19. “They will keep you and keep your loved ones safe.”

COVID-19 Pill Could Be ‘Game Changer’

South Africa at Risk of Being COVID-19 Variant ‘Factory’