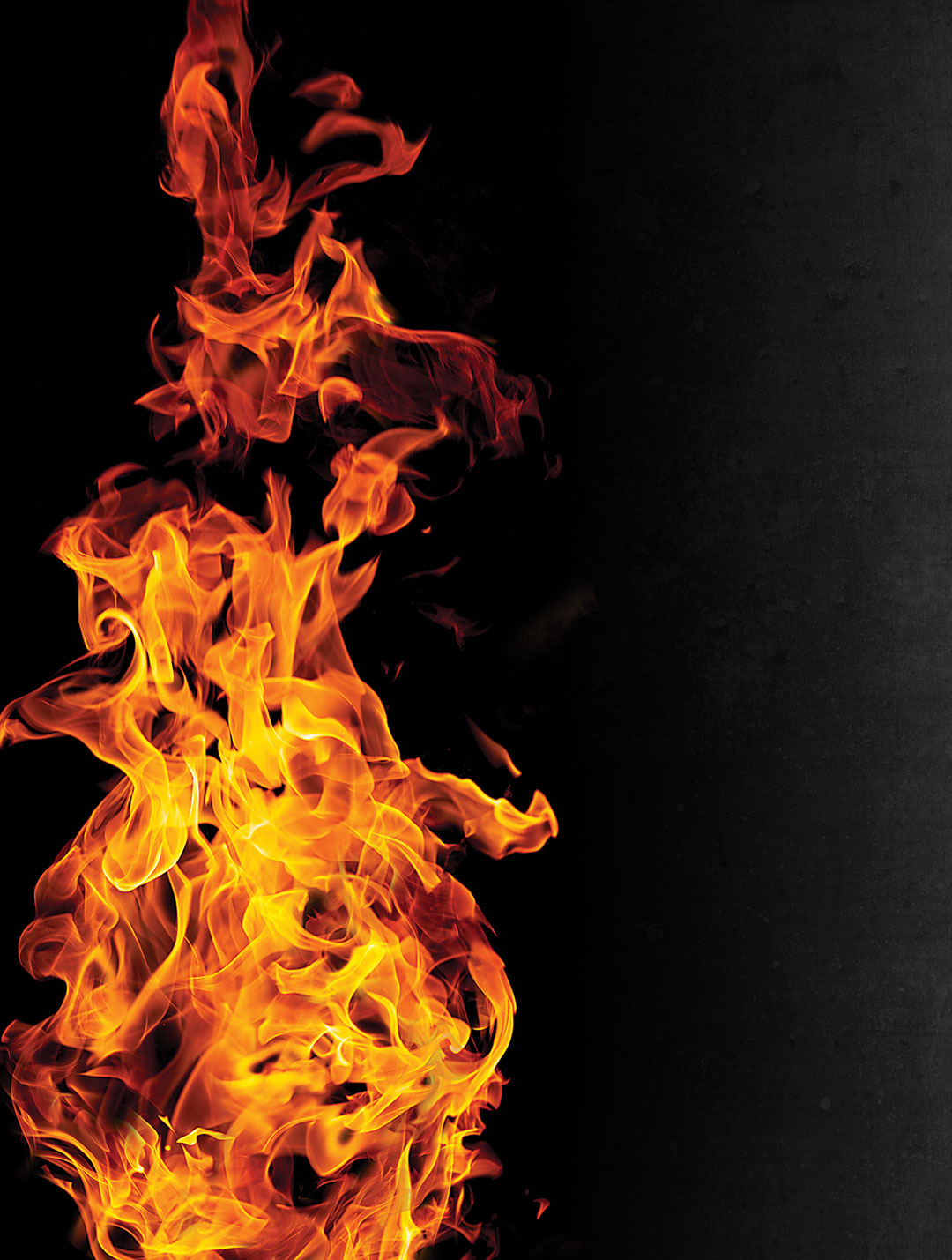 The group is known by many names, including one that evokes the horror and danger of Somalia’s homegrown insurgent group. Its numbers are unclear. Its leadership doesn’t appear to be linked to any one person. Even its central ideology is elusive.

Yet the group strikes at civilian and government targets with lethality and ferocity, ambushing security forces and hacking men, women and children to death before burning their homes to the ground.

In September 2018, these extremists killed 12 villagers and injured 14 others in the northern Mozambique village of Paqueue, a local person told Agence France-Presse. “Ten people killed were shot by firearms and two burnt (to death) after 55 houses were charred,” the source said. “A person was beheaded after being shot dead.”

Some reports indicate that the group began militarizing as far back as 2015 in Mozambique’s Cabo Delgado province, said James Wholley of the Atlantic Council’s Africa Center. Throughout that time young Mozambicans were sent to other countries to study Islam, where they attended armed training camps before returning. Some Tanzanians may have also participated. The group began to solidify its base and pushed against the regional power structure.

The first major attack was on October 5, 2017, when 30 to 40 members of the militant Islamist group attacked police stations, residents and government officials in Mocímboa da Praia, a town in Cabo Delgado province.

“It was clearly an inflection point that was the insurgency announcing its metastasization into what could be described as an insurgency and not just a movement,” Wholley told ADF.

Research shows that northern Mozambique has many of the ingredients for fueling unrest and violence. FocusEconomics rated the nation as the world’s second poorest. The nation’s Mwani population, concentrated along the northern coast, is composed of Muslims who have felt marginalized by the government. The region is known for criminal trafficking enterprises in precious gems, timber, drugs, ivory and people. A new, booming extractive industry has brought large companies into the region and raised tensions among locals. Even so, a specific, clear cause for the violence is elusive.

In fact, the movement and the people behind it at this point are largely distinguished by the mystery surrounding them. They have not sought credit for attacks or spouted a coherent ideology publicly. In that way, they can be contrasted with insurgencies such as Boko Haram in Nigeria and al-Shabaab in Somalia.

“As Islamist militancy continues to spread across Africa, it is moving beyond hotspot countries,” wrote Dr. Benjamin P. Nickels and Paulo Araujo of the Africa Center for Strategic Studies (ACSS) for the Wilson Center in October 2018. “Violent extremism is now reaching peripheral Muslim communities that, as a small fraction of an overall national population, are ancillary political players and something of an afterthought for the central government.”

A THREAT WITH NO NAME

Wholley compiled a comprehensive report in 2018 on the emerging threat in Mozambique. In it, he describes what is known about the group, the names it uses, its leadership, and a list of attacks and violence that can be attributed to it.

The group has been known by several names:

• Ahlu Sunnah wa-Jama is loosely translated as “The Traditionalists” or as the “Followers of the Sunnah and the Mosque.” A former Iraqi terror group and a moderate Somali militia also have used that name.

• Swahili Sunnah, which could be translated as “The Swahili Followers of the Sunnah” or “The Swahili Custom or Path,” applies to coastal Mwani and other Swahili speakers and differentiates their identity from other groups living in Mozambique’s interior and the government to the south.

• Al-Shabaab, a name that is identical to the Somali insurgent group, shows up in media and government reports, but there is no indication that group members refer to themselves that way. Also, no known affiliation with the Somali group exists.

• Ansar al-Sunnah is an early reference to the group and could indicate links to a Tanzanian group of this name, a mistaken association with that group, or an error.

Wholley wrote that the group operates with a decentralized command structure and “no apparent coherent leadership.” Group ideology also lacks coherence beyond violent extremism, crime, and anti-Sufi and anti-government messages. Recruits are young and lack Quranic teaching, and group members number from 200 to 1,500.

“Attacks are allegedly designed to promote insecurity with the goal of enabling criminal enterprise in the region,” Wholley wrote. “Sources allege that clashes are also designed to encourage a heavy security response, which in turn will increase support for the group.”

Despite the various names and tenuous ideology, one thing has been consistent: Violence perpetrated by the militants is brutal and results in many deaths and the wholesale destruction of property, particularly homes, which often are burned to the ground. 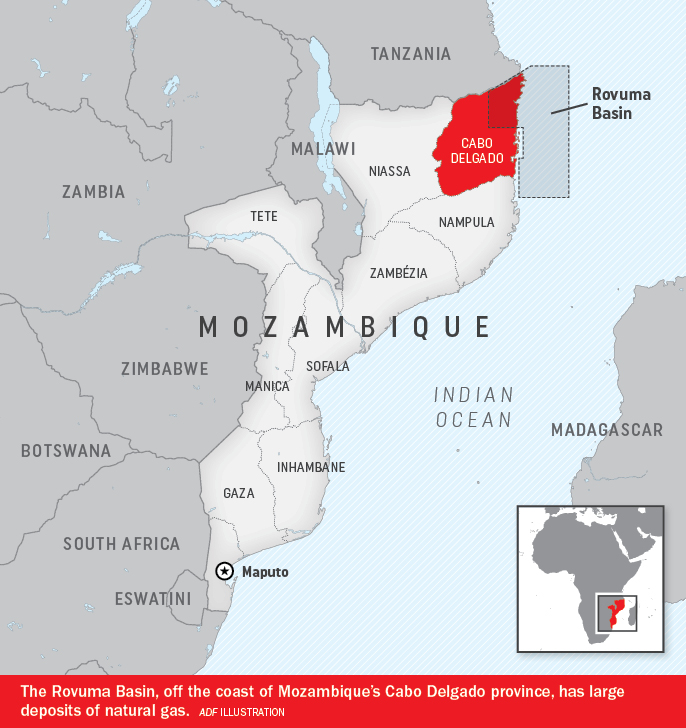 Extremists decapitated 10 people, including some children, on May 27, 2018, after kidnapping them from Monjane and Ulumbi villages, near the coastal town of Palma in the Cabo Delgado province, according to a June 11, 2018, Voice of America report.

In December 2017, Mozambican government forces raided and bombarded Mitumbate, a village in Mocímboa da Praia, which was thought to be the extremist stronghold, according to an ACSS paper by Gregory Pirio, Robert Pittelli and Yussuf Adam. The attack, which employed helicopters and a navy vessel, is said to have killed 50 people and led to the detainment of about 200 more. National police said they had restored peace to the area.

By March 2018, police had arrested 470 people and prosecuted 370, including 314 Mozambicans, 52 Tanzanians, a Somali and three Ugandans, according to the ACSS paper.

Martin Ewi of the ENACT program at the Institute for Security Studies in Pretoria, South Africa, told ADF that criminal prosecutions connected to the extremist violence have shone some light on the still-murky character of the group. It has confirmed to some extent government claims that foreigners are responsible for the violence, although some Mozambicans also are responsible. Tanzania, in mid-November 2018, stopped more than 100 people suspected of violent extremism, from crossing into Mozambique, he said.

Security forces’ responses have included a combination of kinetic military force, such as the December 2017 bombardment, and political and legal action. For example, in January 2018, Mozambique and Tanzania signed a memorandum of understanding regarding mutual security along the nations’ shared border.

Under the agreement, Mozambican police and defense forces will exchange information, conduct joint operations, and exchange technical assistance, according to a report from the newspaper Noticias. Cooperation will include fighting corruption, financial crimes, drugs and crimes related to natural resources.

In May 2018, Mozambique’s parliament passed an anti-terrorism law that provides for prison terms of 20 to 24 years and freezes assets used in crimes, Portuguese news service Lusa reported. The law also allows sentences of 12 to 16 years for those who join terrorist groups and eight to 12 years in prison for acts “preparatory to the formation of a terrorist group.”

Mozambique and Uganda agreed in May 2018 to cooperate in the fight against extremist groups. Mozambique Foreign Affairs and Cooperation Minister Jose Pacheco told APA news service that Uganda has agreed to train Mozambican police officers on counterterrorism.

Wholley said regional cooperation is helpful, but it is difficult to judge the effectiveness of Mozambique’s response to the violence. “The fact that the group continues to exist kind of speaks for itself,” he said. “We don’t know what’s going on with their intelligence; we don’t know what [Mozambique is] trying to do with the local community; we don’t know who they’re talking to in the background.”

Counterinsurgency is not necessarily part of the nation’s regular military training, and it has not dealt with an Islamist insurgency before. Troops also may not be proficient in the region’s local languages. Similar problems arose when troops from southern Nigeria faced the Boko Haram insurgency in the north. “So you have all of those difficult operating conditions you see replicated elsewhere,” Wholley told ADF.

Ewi sees parallels between northern Nigeria and northern Mozambique. In the early 2000s, a group calling itself the “Taliban” emerged in northern Nigeria. Ewi said the group was not taken seriously, and it transformed over time into Boko Haram, a militant Islamist sect responsible for killing tens of thousands of people in the Lake Chad basin. The group still poses a significant threat to the region.

“I see that also happening in northern Mozambique,” Ewi said. “Even the debate about who is carrying out these activities — whether foreigners or locals — to me it’s immaterial. We have to look beyond this. We have to look at what is the potential of this group.”

The key to stamping out the insurgency before it can grow, Ewi said, is for Mozambique to form a task force to undertake a robust intelligence-gathering and investigative campaign starting in the north. Then, any connections found to other countries, such as Somalia or Kenya, must be pursued in cooperation with those countries “right to the end.”

“My fear is that if things continue to go the way they are going in Mozambique, this group is going to fully restore itself, and it’s going to become a force to reckon with in Mozambique that might live with the people for a very long time to come.”

The Threat at Home