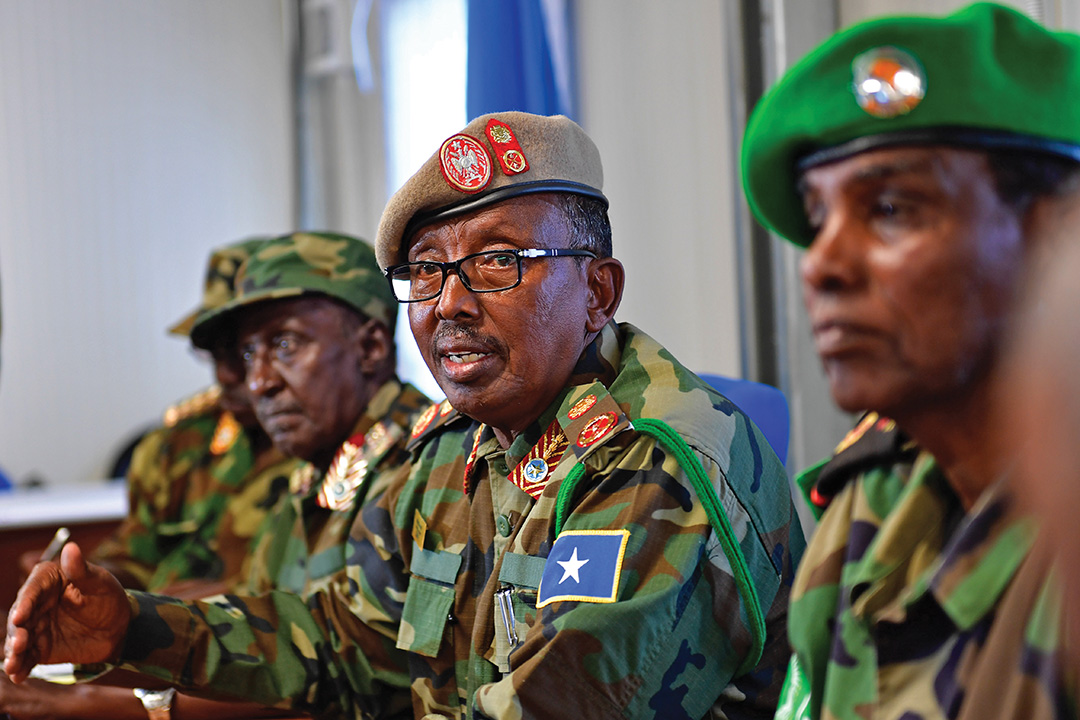 Maj. Gen. Abdiweli Jama Gorod was named Somalia’s chief of Defence Forces (CDF) in 2017. He sat down with ADF at the African Land Forces Summit 2018 in Abuja, Nigeria, to discuss his career, his efforts to rebuild the Somali National Army (SNA) and his belief that the time is finally right to defeat extremism in the country. The interview was translated from Somali and has been edited to fit this format.

ADF: Can you share a bit about your career path?

Maj. Gen. Gorod: I joined the military in 1975 as part of the Somali National Air Force. I was trained as a pilot, a transport pilot. Since then I have worked in different sectors in the Somali National Army and different areas of the government. I have been around both politics and the military. I was not seeking or was not eager to hold a higher office, but my experience and my expertise have allowed me to go back and help the country. This is my opportunity to serve the nation as the chief of defense. It is also the first time a former Air Force officer became CDF in the history of Somalia.

ADF: The Somali National Army is being rebuilt from the ground up. Can you describe that process and where it stands now?

Maj. Gen. Gorod: The SNA is going through stages to be built back up. It is not completely built. Now, we are going through some difficult challenges; probably our biggest challenge is to have military bases and barracks where officers are stationed. We don’t have that, and we don’t have the resources. We’re not equipped. We are looking for partners and also donors to help invest in the SNA. We are eager to help the SNA develop through partnerships with different countries. We want to use this help to have our own standing Army made up of Somalis.

ADF: Somalia has received training from multiple sources. What has been the most helpful, and how has that training translated onto the battlefield in terms of readiness?

Maj. Gen. Gorod: All the foreign partners that have trained us — including Turkey, the United Arab Emirates, the European Union Training Mission, the U.S. and the United Kingdom — all this is helpful for the Somali Army. But when it comes to battle and going to war, the only team that really goes to war is the special forces, and they were U.S.-trained. They are actually having good results. They are called Danab in Somali, which means “lightning”.

ADF: Is there any way to predict how soon the SNA will be ready to take over full responsibility for security in the country?

Maj. Gen. Gorod: Whatever it takes, we are planning to take over responsibility. No matter what our capability and capacities, we will put our hearts out to get ready for it.

ADF: How would you describe al-Shabaab’s
current strength?

Maj. Gen. Gorod: I don’t have an exact figure, but we estimate that they are small in number. They are mobile; they move around. We don’t have a strong capability in terms of our own military intelligence service to track exactly where they are. We are looking for partners to help us build our military intelligence. This is our weakness in the Army.

ADF: Has there been any success at cutting off their funding sources?

Maj. Gen. Gorod: They still do taxation through roadblocks. They rob people in rural areas; they threaten them and charge them high taxes. But the sale of charcoal, which had been a major source of funding, has stopped. This has impacted them financially.

ADF: Al-Shabaab has been notable for its ability to recruit people from Somalia and the East African region, and from North America and Europe. What can be done to counter their rhetoric and discredit their propaganda?

Maj. Gen. Gorod: The first things you need to ask is, “Who are al-Shabaab? What components are they? Where did they come from? What type of individuals are they?” In my opinion, there are three general types of al-Shabaab members. One is a foreign element; the second one joins because he is power hungry; the third one is there because of incentives, meaning he is there for the money. We are going through counternarratives about how to approach the youth. We are trying to reach out to the youth, telling them to support the government instead of going down this path. But there is a lack of employment, which is a big deal in leading the youth to follow that path. So we have different strategies against al-Shabaab. The power-hungry ones, the president offered them amnesty, to put down their arms, to join the government and not face punishment. The foreign elements, they cannot be reformed. They must be killed or captured.

ADF: How is the SNA working with the African Union Mission in Somalia (AMISOM)?

Maj. Gen. Gorod: We are working together with AMISOM. The gaps are being closed; now we run joint operations, including in Bulo Marer in southern Somalia, where we destroyed 70 militia members from al-Shabaab. This was a major success for the SNA and AMISOM working together. But it’s difficult. For a while there has been a lack of coordination of command and control. Every troop-contributing country, when they go on operations, it doesn’t go directly through the AMISOM sector commander. They send the directive to go on operations all the way back to their home country. So instead of decision-making being done by an AMISOM representative in Somalia, it’s done this way. This delays operations, and it’s not efficient. Every country wants to get approval from its own defense minister.

ADF: What would be your definition of success in terms of really getting the SNA on the right footing?

Maj. Gen. Gorod: Success is all about international partners. If they invest in the security sector in Somalia, if they invest in the SNA, things will turn around. If that happens, in two years, results will be delivered and we can clear al-Shabaab.

ADF: Putting investment aside for the moment, what would you be happy to see in terms of the quality of the fighting force and the professionalism of the SNA in several years? Where are you focusing your efforts to make improvements?

Maj. Gen. Gorod: The morale of the population right now is very high, and they support the government. It wasn’t there a few years ago. To win the hearts and minds of the people, it gives you an opportunity to eradicate these violent extremists. Now, we have support from the military and support from the people to the government. The path we are going on, the training programs we have in place, the pace we are going, the future is bright. It’s time to seize the moment. We have invested in our own training programs. They are small, but we will continue to do that. And we are starting to see people come through those training programs and take on leadership roles.

A Mission finds its voice