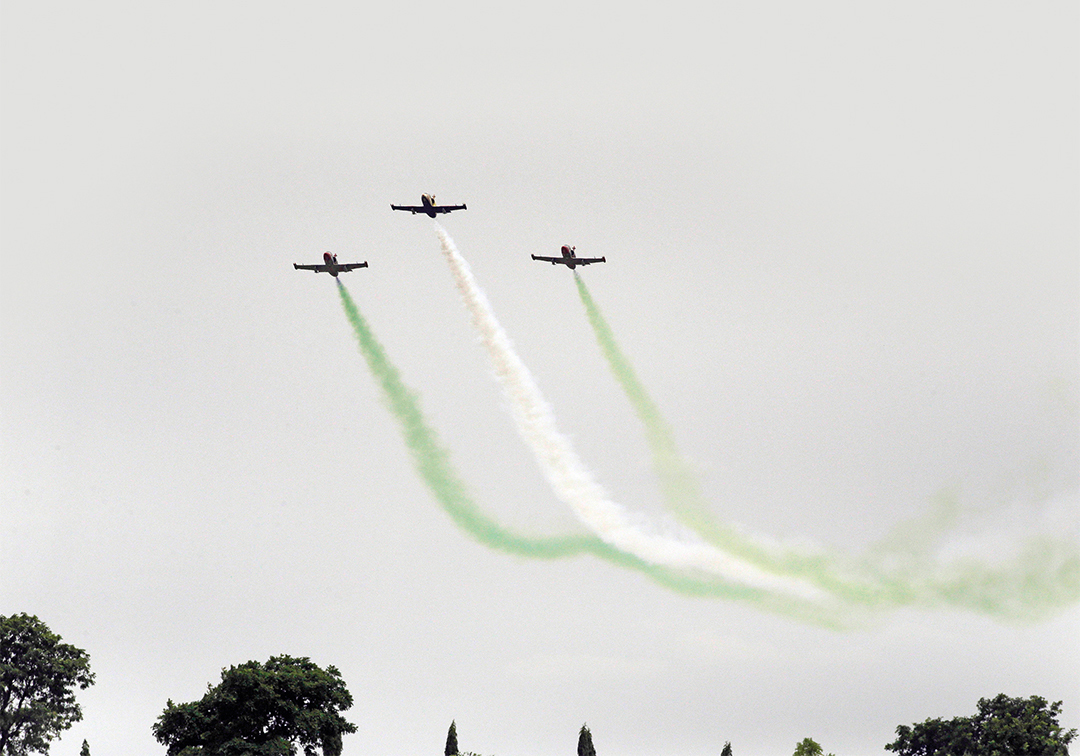 Air Power is a Critical Tool in Stopping Boko Haram

On Friday, September 1, 2017, Boko Haram extremists took a break from their warfare to observe a holiday. Hundreds of the fighters gathered under trees in the Sambisa Forest in Borno State, northeast Nigeria.

An Alpha Jet began the attack with bombs, “neutralizing” hundreds of the fighters, said a report published in Nigeria’s Daily Post. A second jet followed with a bomb attack, and a third fighter used rockets to strafe fleeing insurgents. “After the attacks, a few Boko Haram survivors were seen scampering from the location,” the newspaper reported. Only days before the raid, the chief of the air staff, Air Marshal Sadique Abubakar, told troops at the NAF base in Yola that global experience “has shown that air power is critical to the defeat of asymmetric warfare such as the Boko Haram insurgency.”

“All hands must therefore be on deck to ensure the effective projection of air power to complete the defeat of the Boko Haram challenge,” he said.

Nigeria’s Air Force has its hands full. Boko Haram began in northern Nigeria, but it also has roamed parts of neighboring Burkina Faso, Cameroon, Chad and Niger. Of the countries in the region, Nigeria is, by far, the most formidable air power.

According to globalfirepower.com, Nigeria’s Air Force is the largest in the region. Its air fleet is about the size of the combined fleets of neighboring Cameroon, Chad and Niger. Nigeria’s total fleet is estimated to be about 110 aircraft, including fighters, transport planes, helicopters and trainers. Such figures are seldom exact since aircraft go in and out of service for extended periods or are even retired without it being noted.

Obsolete or retired aircraft are indicative of the struggle to maintain air fleets across the continent. Abubakar has stressed that the NAF is improving aircraft and equipment maintenance, allowing it to fly more than 9,000 hours in 2015 and 2016 in counterinsurgency operations.

According to the news portal defenceWeb, Nigeria began to modernize its Air Force in 1999, when 16 years of military rule gave way to a new democratic government. Nigerian officials began examining Air Force capabilities and started programs to refurbish and replace old equipment. Better maintenance has been re-emphasized in recent years. Since 2016, the NAF appears to have adopted a “make the best of what we have” philosophy, keeping costs down and buying smaller attack planes that are more adaptable to asymmetric conflicts. And they have had some successes in bringing retired equipment back into service.

In 2016, the Air Force reconfigured two Alpha Jets in its inventory that had been acquired without weapons capability. The two jets were among four bought from the United States in 2015. The four jets were purchased specifically to combat Boko Haram. Until the weaponry fitting, the jets had been limited to pilot training. The Air Force had been looking to get the jets reconfigured overseas, but the manufacturer had long since closed down the production line. Eventually, Nigerian engineers proposed ways to do the work in Nigeria. Bright Mountain Media says the adaptations cost about $13,000. Some reports listed a cost as low as $2,000. “Given typical military equipment costs, this stands as a remarkable achievement,” Bright Mountain reported. “Foreign companies had requested up to $30,000 just to assess the cost of doing the refit.”

In December 2016, the Air Force began taking delivery of four Pakistan-made Kamra Super Mushshak prop planes to be used as trainers. Abubakar said the planes had been donated, according to Jane’s Information Group. Pakistani instructors and maintenance workers helped integrate the planes into the Nigerian fleet as Nigerian mechanics and maintenance personnel trained in Pakistan. Air Force personnel said they eventually hoped to have 10 of the training planes. Abubakar said that by the end of the first quarter of 2017, the NAF would have 56 new pilots trained. Nigeria said it planned to train all new pilots in the Super Mushshaks and transition them to jets or multiengine planes for advanced, specialized training. The NAF said in April 2016 that the Super Mushshaks would replace their older, Austrian-made trainers that were no longer considered suitable because of their inability to perform aerobatics.

In early 2017, the Air Force began refurbishing old, broken firetrucks at its bases all over the country. As of October 2017, it had repaired and restored 17 of 24 firetrucks. Some of the trucks had been parked for more than 20 years and identified as “beyond economic repairs.” Local companies did the work using mostly locally sourced parts and materials.

In February 2017, the Air Force announced that it was getting three Embraer Super Tucano turboprop planes from the Brazilian Air Force. The small, highly maneuverable planes are particularly suited for counterinsurgency operations and precision guided-munitions runs. In August 2017, the United States approved the $593 million sale of 12 additional Super Tucanos to Nigeria.

In April 2017, the Air Force commissioned two Mil Mi-35M attack helicopters to boost counterinsurgency efforts, Jane’s reported. The Air Force had ordered 12 of the Russian aircraft, which can be modified for attacks, ground assaults on armored targets, medical evacuation and transport. Abubakar said they would be used against Boko Haram. The Air Force commissioned the two helicopters during an event marking the service’s 53rd anniversary. During the observance, the Air Force also displayed its locally designed and developed Gulma drone, which has a wingspan of about 3 meters. Officials have said that the total cost of designing the drones and training 15 drone pilots was about $3.5 million. In 2006, Nigeria purchased drones made in Israel, but those were eventually grounded because of a lack of spare parts and an inability to maintain them properly.

In July 2017, the Air Force announced that it had reactivated two grounded unmanned aerial vehicles (UAV). The drones were used for training UAV pilots and operators. Based at the Kaduna flying school, the two craft were grounded earlier in the year because of a lack of spare parts. The NAF had attempted to get training spots for its UAV operators in other countries but decided to develop a “domestic solution,” Jane’s reported. Nine officers were trained in Nigeria in UAV operations through the Nigerian Air Force Research and Development Centre.

In July 2017, the Air Force announced it was expanding its training to meet the demands of its expanded mission and air fleet. As reported by Jane’s, part of the expansion was the result of reactivating some of its aircraft.

As of the end of 2017, Boko Haram was faltering and had splintered into two groups. Air Marshal Abubakar said in a college lecture in September 2017 that the Nigerian Air Force had wiped out some of Boko Haram’s top leaders and several of the terrorist group’s logistics bases.

“Nigerian Air Force airstrikes in the North East have devastated and coerced the insurgents by limiting their freedom of action to operate openly and en masse, as was the case before,” he said. “Equally, these punitive strikes have eradicated the insurgents’ ‘front-line’ leadership and logistics bases, thereby reducing their operational capability.”

He added that “equipping and sustaining a balanced air force” is one of the greatest challenges facing Nigeria. “Given the current precarious situation Nigeria operates in and the rampant cases of conflicts, the Armed Forces must prepare for the conduct of war and secure military victories until peace is restored politically,” he said. “Indeed, the warfighting mission of an armed force will determine how it is organized, equipped and trained.”

In the 1990s, Nigeria became the key player in a West African mission to restore order to war-torn Liberia. Two rebel factions known as the National Patriotic Front of Liberia (NPFL) opposed the corrupt government of Samuel Doe, and with money from the sale of diamonds, they attacked the Liberian capital of Monrovia. Using child soldiers, they terrorized the capital in a frenzy of rape and murder.

A coalition of West African countries formed a 3,000-person peacekeeping force called the Economic Community of West African States Monitoring Group (ECOMOG) to stop the rebels. Before ECOMOG could restore order, it first had to subdue the rebels by force. In the final months of 1990, four Nigerian Alpha Jets repeatedly hit rebel gun placements, supply convoys and headquarters.

The world took notice of Nigeria’s use of the scrappy little Alpha fighter jets. Time magazine reported: “The firepower of Nigerian Air Force fighter aircraft has finally dealt an incalculable blow to the war effort of the NPFL leader.”

In 1992, Nigeria loaned six Alpha Jets to ECOMOG to use in its airstrikes, supply line bombings and night raids. The ECOMOG operation flew a total of 3,000 combat missions. None of the six planes was lost. Nigeria continues to make good use of its aging Alpha Jets. They are hardly state-of-the-art fighters — their design dates to 1973. But they are fast and handle well, to the point that pilots who have trained in them complain that they were unprepared for the greater difficulty of flying larger jets.

Cameroon also is using Alpha Jets in its battles with Boko Haram. In December 2014, Boko Haram fighters had taken over a military base in Assighasia, Cameroon. The Cameroon Air Force responded with Alpha Jet airstrikes that killed 14 insurgents. As of 2017, Cameroon was still using at least four Alpha Jets of the original 27 it purchased. Nigeria’s Alpha Jets were largely abandoned for years, until the Air Force began returning them to service in 2013 to fight Boko Haram. Of the original 24, an estimated 13 were returned to service.

An incident in June 2016 shows how effective they can be. The Multinational Joint Task Force had recently chased Boko Haram fighters out of camps in the Sambisa Forest. Insurgents armed seven trucks — two with heavy machine guns — and waited to ambush opposing forces near Daira Noro in Borno State. As the Boko Haram fighters prepared their attack, an unarmed civilian plane flew over — and radioed the insurgents’ position to a pilot in a nearby Alpha Jet. As Bright Mountain Media reported, “The Alpha Jet unleashed a barrage of rockets on the concealed ambush, followed by 250-pound bombs and strafing runs.”

All of the trucks were destroyed. Nigerian troops arrived and chased off the survivors. The troops found 15 bodies and two abandoned rocket-propelled grenades.

A Brief History of the Nigerian Air Force

1962 February — The country begins discussing the need for an air force. Ten cadets are dispatched to train with the Ethiopian Air Force.

1966 January — The government is overthrown in a military coup, followed by a countercoup.

1967 July — Civil war breaks out, and Nigeria needs to have true combat aircraft. The country acquires MiG-15 and MiG-17 fighter jets to help end the war in 1970.

1970 After the civil war, the Air Force is restructured and modeled after the air forces of the United Kingdom and the United States.

1971 July — The Institute for Strategic Studies estimates that Nigeria has 7,000 Air Force personnel and an air fleet of 66 planes and helicopters. In the ensuing decade, the Air Force acquires more aircraft, including six of the versatile C-130 cargo planes.

1989 The NAF unveils its first locally built trainer aircraft, dubbed the Air Beetle. The trainer is built from a kit. The Air Force orders 60 of the kits.

1999 May  — A new democratic government ends 16 years of military rule. Moving into the current era, Nigeria begins revitalizing its Air Force, reactivating some aircraft and upgrading its fleet.

2009 July — The leader of Boko Haram is killed, triggering a wave of violence that has proven to be the modern Nigerian Air Force’s greatest challenge.

From Messages to Mayhem