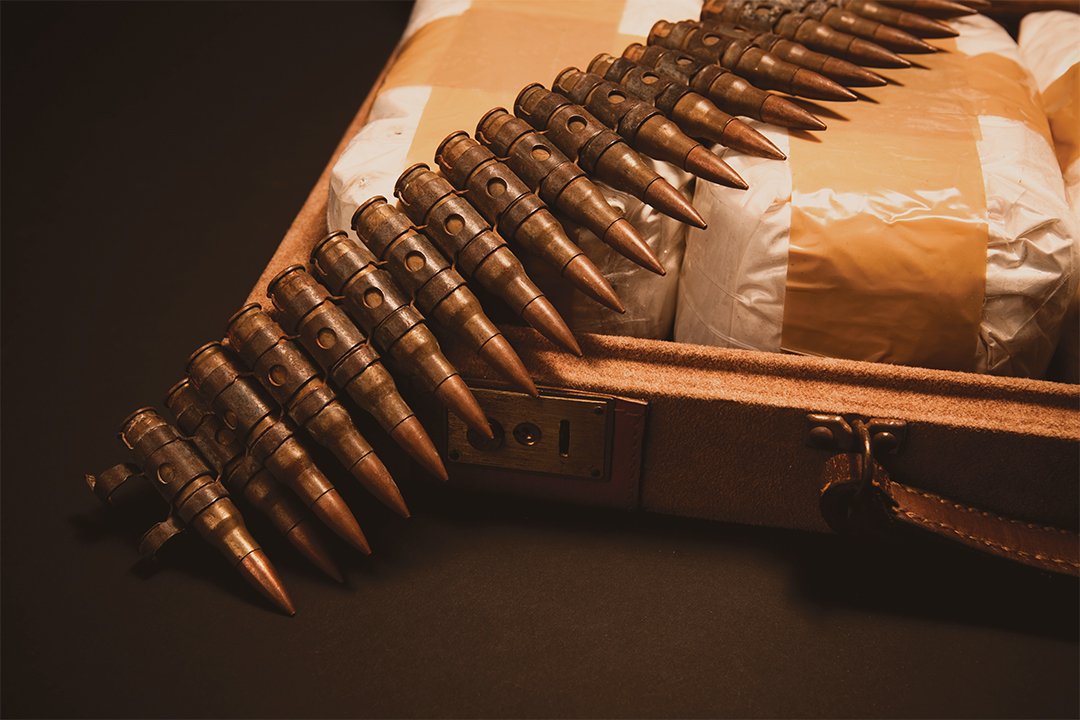 Trafficking Networks Can Destroy a State From Within

In the early 2000s, West Africa became the preferred point of entry for traffickers moving narcotics from South America to Europe.

This brought a new type of economic activity into countries along the Gulf of Guinea, and many living there saw it as a chance to make money. Taking bribes from drug traffickers or offering smugglers safe passage were commonly viewed as victimless crimes. After all, the deadly product wasn’t destined for African consumers. These traffickers were just passing through.

Some locals who participated in the drug trade gained high social status in their communities.

“When you are able to successfully send drugs outside Ghana and come back, you are given traditional titles of honor, and my favorite title is an osammerema, meaning a successful warrior,” said Dr. Kwesi Aning, director of the faculty of academic affairs and research at the Kofi Annan International Peacekeeping Training Centre in Ghana.

“You’ve gone to war in the European or American terrain,” Aning told ADF. “You’ve infiltrated, sold your drugs and come back. You’ve built a nice house, you’ve contributed a little bit to building a school or church. Therefore, you are seen as a victor in war.”

But it wasn’t long before the cost of this war became apparent. Public officials and the security sector became more corrupt. Shadow economies sprang up where goods were moved and sold untaxed. Disaffected citizens lost faith in their governments and law enforcement officers. In places such as Guinea-Bissau and northern Mali, the traffickers became more powerful than the state itself. This led to a breakdown of law and order and, ultimately, the collapse of the state.

Experts say the corrosion of the state by transnational criminals happens slowly, which makes it easy to overlook. It is not like a war or terror threat that can be fought directly, but it is no less dangerous.

“Powerful transnational criminal networks constitute a direct threat to the state itself, not through open confrontation but by penetrating state institutions through bribery and corruption and by subverting or undermining them from within,” wrote Peter Gastrow, a former South African parliamentarian and director of programs at the International Peace Institute. “Governments that lack the capacity to counter such penetration, or that acquiesce [to] it, run the risk of becoming criminalized or ‘captured’ states.”

To move illicit goods, traffickers need the help of officials at the ports, along roads and at borders. Fortunately for traffickers, they have money to make this happen, and poorly paid officials often are tempted to accept bribes.

“In a fairly poor African country, $100 to a police constable is a lot of money,” former Nigerian President Olesegun Obasanjo told IRIN. “All he has to do is turn his eyes.”

The cost of corruption is so high that a kilogram of cocaine is valued at $13,000 when it arrives on the West African coast but increases to $27,000 by the time it reaches the Mediterranean Sea, according to the West Africa Commission on Drugs. Much of the additional cost is due to bribes paid to officials along the way.

“All public sector institutions become corrupted by these networks,” Aning said. “From the police to customs, immigration, the military, judges, chiefs, the educational sector. What it means is the most sophisticated narcotics [traffickers] can selectively shift their drugs from one country to the other, knowing that the country is weak in certain areas.”

Once corruption takes root, it can quickly spread to the highest levels. Notable figures arrested for trafficking in recent years have included the Air Force chief of staff in Guinea-Bissau, the deputy director of Liberia’s Drug Enforcement Agency and the son of the president of Guinea. In 2016 on the tiny island of Mauritius, seven police officers were found guilty of trafficking narcotics, including one officer who was caught returning from Madagascar with 3 kilograms of heroin. That officer later was found dead in his prison cell, leading some to allege a cover-up by other crooked officers.

“When police, who are supposed to be the guardians and protectors of society, enmesh themselves in this type of traffic, that poses a major problem for society,” Anil Gayan, Mauritius’ minister of health, told Radio France Internationale.

Once citizens recognize that the state is rife with corruption, they tend to distance themselves from it. They vote less because they don’t trust the candidates or the system. They don’t apply for business licenses because they fear they will be forced to pay a bribe at the license office. And they tend not to report crimes, believing the police will not help them.

“People just pull away from the state,” Aning said. “Most citizens will have very little to do with the state because they are simply not sure. I assure you it’s a very disturbing, dehumanizing and increasingly threatening development.”

Average people bear the brunt of the damage done by trafficked goods. In recent years, the myth that drugs simply pass through West Africa and do not affect the people living there has been shattered. A 2008 United Nations report found that one-third of the cocaine bound for Europe stayed on the African market for domestic use. More recently, laboratories have sprung up where dealers make synthetic drugs bound for Asian markets. Addiction, overdoses and drug-related street crime all have increased.

Fundamentally, trafficking is an economic enterprise that takes place outside the reach of the state. This leads some to classify it as a “shadow economy” and when this dark commerce grows to a size that is nearly as large as the formal economy, it causes problems.

At the drug trafficking peak in 2008, an estimated 50 tons of cocaine, valued at $2 billion, were transported into West Africa. By comparison, the combined foreign direct investment for eight West African nations was $1.15 billion in 2011. This tidal wave of drug money has a distorting effect on local economies.

Furthermore, the state does not tax or control trafficking money, and a few individuals keep profits. The state steadily sags, becomes less effective and poverty expands. As employment opportunities shrink in the formal economy, more and more people search for work in the shadow economy. The impact on the state’s ability to provide for its citizens’ health and well-being can be devastating.

Once the state is weakened, traffickers step in to fill the void. A 2016 Brookings Institution report by Lansana Gberie found that in northern Mali before the 2012 crisis, traffickers sat at the top of a pyramid of power that included extremists, kidnappers, police and army officers, legitimate business people, tribal leaders, and politicians.

A “protection economy” developed in northern Mali, and all involved had an incentive to protect the routes through which illicit goods were transported.

“Enormous profits, rather than ideology, have held the alliance together,” Gberie wrote. “Therefore, counternarcotics efforts … were bound to fail as some of those entrusted with enforcing these measures were themselves complicit in the trafficking.”

Unsurprisingly, alliances developed in Mali between traffickers and violent extremist groups. One of the most notorious examples of this is Mokhtar Belmokhtar, who became a kingpin smuggling cigarettes in northern Mali and charging protection taxes to other smugglers. He used the profits from this commerce to finance terror attacks. Other extremist groups, including al-Shabaab, ISIS and al-Qaida in the Islamic Maghreb, have formed working partnerships with traffickers to finance their activities.

Aning said he witnessed this trafficking-terror nexus during field research in Mali and Burkina Faso. “The radical groups know the terrain very well because they are always hidden,” he said. “They know where the water holes are, they know where you can drive your 4×4 across the desert. They also know most of the tiny communities. There’s an opportunistic set of interests that comes together. … Both parties find out that they can do business together.”

In northern Mali the alliance proved untenable. In 2012, Malian Army officers declared they were fed up with underfunding and chronic state corruption. A captain launched a coup and overthrew the government of President Amadou Toumani Touré. In the ensuing chaos, Tuareg residents of northern Mali rebelled, voicing long-standing anger at a lack of representation, public investment and the absence of the state in their region. Mali became a failed state requiring an international intervention.

When it comes to defeating illicit trafficking, the stakes are as high as they get. Gastrow of South Africa compared African nations infested with transnational crime to a common sight on the savannah: a termite mound. From the outside these mounds appear sturdy, but inside they are hollowed out and, thus, easy to topple over.

Nations that do not proactively fight trafficking networks risk becoming as hollow and weak as these mounds.

“While to the onlooker [it] appears to be in a relatively healthy state, it is in fact weakening due to a process of internal decay,” Gastrow wrote in a study of Kenya’s illicit trafficking challenges. “Endemic corruption and powerful transnational criminal networks are ‘white-anting’ state institutions and public confidence in them. Termites are at work, hollowing out state institutions from the inside. As a result, development is being hampered, governance undermined, public trust in institutions destroyed, and international confidence … constantly tested.”

A Network of Misery