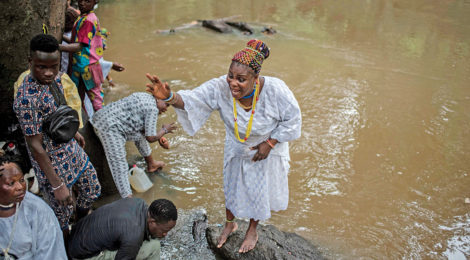 Every year, thousands of Yorubas gather to celebrate Osun, the goddess of fertility and water. The festival held by the West African ethnic group takes place in the Osun-Osogbo Sacred Grove in southwestern Nigeria.

According to UNESCO, which named the area a World Heritage site in 2005, the dense forest of the grove and its river “is dotted with sanctuaries and shrines, sculptures and artworks in honor of Osun and other deities.”

Priestesses prepare offerings and sacrifices to the great goddess: a heady mixture of sacrificed chickens, ochre powder, potato chips and gin. Crowds accompany the Arugba, a virgin whose face is covered with a scarlet cloth embroidered with shells, to the river where the spirit of the water goddess lives.

Belief in the Yoruba gods persists, unstifled by outside religious influences.

“I’m Christian, Muslim and a traditionalist,” said Ayodele Folasade, an employee of the Osogbo museum. “I pray to Allah five times a day, I pray to the Lord Jesus Christ, but I also go to worship Osun by the river.

“Yoruba people say that if your prayers don’t work with one God, try the other ones,” she said with a smile. “Pastors or imams say it’s not good to have many gods, but almost everybody turns to Osun when they need her.”

Omitola Babaosha, a visitor to the festival, said he believed in the traditional gods but unlike others did not hide it.

“I’m very proud of my heritage, and I don’t care what people say about me,” said Babaosha, wearing a large white tunic. “Whoever you believe in, whatever your religion, at the end of the day you need water to survive.”