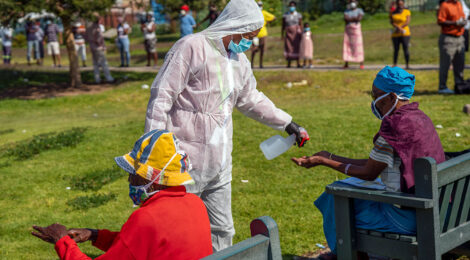 What We Know and Don’t Know About COVID-19

Since the first COVID-19 cases emerged in China late last year, scientists and doctors around the globe have raced to understand the disease, how it spreads and what can be done to prevent it from being transmitted.

After more than five months, we know much more today than we did at the beginning of the outbreak. But many questions still remain.

COVID-19, the disease caused by the novel coronavirus, is widely thought to have originated at a “wet market” in Wuhan, China. The ensuing global pandemic has infected more than 4.3 million people and killed nearly 300,000. In Africa, almost 70,000 people have been sickened, and more than 2,400 have died.

Here are some things researchers have learned about the disease and other things that still aren’t clear:

COVID-19 may be spread by people with no symptoms

Several recent studies suggest that COVID-19 carriers showing mild or even no symptoms may be spreading the disease. That’s a big problem, because symptoms such as fever, cough, sore throat and shortness of breath may not be evident for up to two weeks.

One study examining the initial virus spread through hundreds of cities in China found that infected people who had only mild symptoms helped fuel the spread, according to a report on The Cleveland Clinic’s website. The lack of symptoms made carriers at greater risk of exposing “a far greater portion of the population to virus than would otherwise occur.”

It’s not clear, however, how long people can spread the virus once they are infected. Symptoms can come in waves, and a person can have a mild case for a week or be ill for up to three to six weeks in severe cases. The U.S. Centers for Disease Control and Prevention said the “onset and duration of viral shedding and the period of infectiousness for COVID-19 are not yet known.”

COVID-19 is worse than the flu

Although the exact death rate is not yet clear, COVID-19 kills a larger proportion of people than the flu. It also has a higher potential to overwhelm health care systems and hurt people with other illnesses.

Biologically, it behaves differently than the flu, although some symptoms are similar. It usually takes about five days for COVID-19 carriers to develop symptoms. For the flu, it’s two days. Before January, the virus was unknown to science. No human immune system had seen it before, so no unexposed human has any natural immunity to it. That makes COVID-19 more contagious than the flu.

Older adults, especially those age 65 and above, die at higher rates than those in younger age groups. For that reason, COVID-19 has been characterized as a disease that disproportionately affects old people, who often have one or more complicating health conditions such as pulmonary or cardiovascular disease, diabetes and obesity, among other things.

Children, conversely, have been infected by and died from COVID-19 in much smaller numbers. But this data should not be used to assume that children are not in danger. In fact, medical officials in Italy and the United States are beginning to see disturbing incidents of multisystem inflammatory syndrome, which is similar to a childhood condition called Kawasaki disease. Kawasaki usually affects children age 5 and under, inflaming artery walls and damaging the heart.

“This multisystem inflammatory syndrome is not directly caused by the virus,” Dr. Jeffrey Burns, a critical care specialist at Boston Children’s Hospital, told CNN. “The leading hypothesis is that it is due to the immune response of the patient.”

There is no COVID-19 vaccine

Because the virus is new to humans, there is no vaccine and no inherent resistance to it. However, the journal Naturerecently reported that 78 vaccine projects had been launched around the globe with 37 more in development. Among the projects is a vaccine program now in phase one trials at the University of Oxford in England, two others at U.S. biotechnology corporations and three more at Chinese scientific groups. Human testing could begin this year. Opinions vary on when an effective vaccine can be ready. Some estimates are as long as 18 months.

It’s also not clear whether a COVID-19 vaccine would offer permanent protection or whether it would require yearly shots like flu vaccines. Periodic booster shots also are a possibility, depending on how long immunity lasts.

Howard Bauchner, editor-in-chief of Scientific Publications at The Journal of the American Medical Association, found that countries that took early action to close businesses and schools, ban mass gatherings, and encourage people to stay at home had greater success at slowing the spread of the virus than countries that were slow to react.

“We’ve learned from Korea, Singapore, Hong Kong and Taiwan that if you can identify people quickly, you can track them and you can quarantine them,” Bauchner said. “You can prevent large spread within societies.”

Social distancing has helped many countries slow the spread of COVID-19 and avoid overwhelming hospitals and health facilities. But it remains unclear how long social distancing must continue to avoid upsurges in case numbers and new waves of infection.