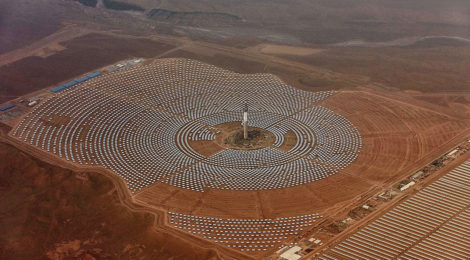 In Morocco, a giant solar power plant near the city of Ouarzazate soon will increase its capacity to 580 megawatts. Solar energy has been slower to arrive in West Africa than in some other parts of the continent, but growth is underway.

West Africa’s largest solar power station officially opened in November 2017 in Zagtouli on the outskirts of Burkina Faso’s capital, Ouagadougou. It cost $55 million to build with funding from France and the European Union. Zagtouli now delivers 30 megawatts to the national power grid.

Before Zagtouli, West Africa’s largest solar station was in Bokhol, Senegal. It opened in 2016 and cost $30 million. Charlotte Aubin, founder and director of Greenwish, a renewable energy company, was closely involved. She helped create the first independent power producer (IPP) with money from Senegalese investors and an international fund backed by three European governments.

“The first project we did was in Senegal, and it was a milestone for the continent as well as Greenwish,” Aubin said. “It was the first solar IPP that came out of the ground in Sub-Saharan Africa. It’s now providing electricity to 160,000 people in Senegal at a 40 percent discount to the cost of the grid at the time.”

The greater the demand for a product, the cheaper it becomes, said Moussa Coulibaly, who runs Air Com, one of Mali’s oldest solar power companies. Led by investment from the United States and China, the industry has been rapidly scaling up. Production costs have come down as a result. A solar panel that used to cost hundreds of dollars now sells for about $90, Coulibaly said.

Something else has changed in the region: the law. Until recently, IPPs such as Air Com and the Greenwish project were illegal. Senegal lifted the ban on nonstate power production in 1998; Mali did it in 2000, and Burkina Faso legalized them in 2017.

Senegal now has four solar power stations. Burkina Faso is building two more. South Africa and Morocco have dozens each. And the list is getting longer and includes Ethiopia, Ghana, Kenya, Mauritania and Mozambique.

← In a Climate of Uncertainty, Kenyan Farmers Turn to Peppers
Southern White Rhino Could Save Nearly Extinct Relative →