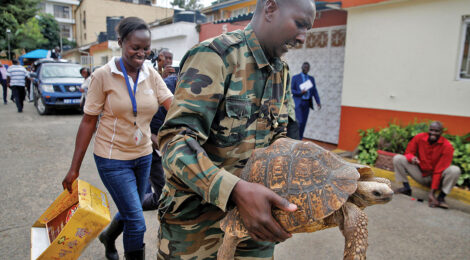 Africa is more connected to the outside world than ever before. Roads, ports, airports and the internet are making it possible for merchants to sell their goods to buyers across the globe. This globalization has the potential to improve the standard of living for people in small villages and major cities.

But global trade must be safeguarded from criminals seeking to exploit it. Because of Africa’s geography and a perceived lack of enforcement capacity, traffickers believe they can loot the continent’s wealth.

Action is urgently needed. After years of decline, drug trafficking from South America to West Africa has risen at an alarming rate. In the first three months of 2019, Cabo Verde and Guinea-Bissau seized 10.4 metric tons of cocaine, more than the total seized on the entire continent between 2013 and 2016.

Traffickers also are looting natural resources at a record pace, including timber, wildlife parts and fish. In North Africa, human smugglers are cashing in on the desperation of migrants by sending them on perilous journeys in exchange for money.

But Africa’s security forces are responding. Gulf of Guinea nations are implementing the Yaoundé Code of Conduct and setting up a system of information sharing, joint operations and maritime surveillance that is making the region’s waters safer.

In Southern Africa, nations are cooperating to protect endangered wildlife, trace illicit cargo and secure their borders. Through the Southern African Development Community, the region’s militaries are working on agreements to share technology, conduct joint patrols and set up joint operations centers.

Countries across the continent are partnering with the international policing group Interpol to identify and intercept traffickers. One worldwide sting codenamed Operation Thunderball resulted in 1,800 seizures of illicit cargo in less than a month.

Stopping these criminals is vital. Illegal trade not only steals the continent’s wealth, it fosters corruption and undermines citizens’ faith in the rule of law. When honest business owners see criminals profiting, they are more likely to move their businesses or decide to break the law themselves. Trafficking has a corrosive effect on every institution it touches.

By shutting down illicit trade, Africa’s security forces can pave the way
to prosperity.

← ‘To Satisfy our Customers’
Stronger Together →