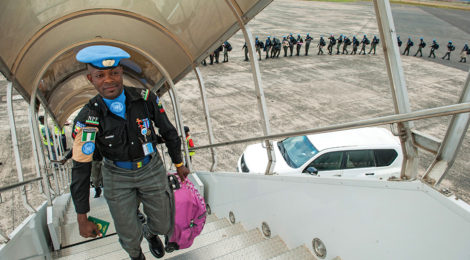 Two oft-repeated Swahili proverbs state, “One finger alone cannot kill a louse,” and “One pole cannot support a house.” The meaning is clear: Tasks both small and large require cooperation.

Security is no different. The threats facing the African continent are complex and interconnected. Terror groups hop across borders, internal disputes send refugees fleeing by the thousands and natural disasters can fan across a region. Combating these threats requires innovation. Multilateral interventions must take new forms and include a variety of partners. African security leaders are showing that they’re up to the challenge.

One example is the G5 Sahel Joint Force, a new alliance among five West and Central African countries. The 5,000-person force was designed to take on traffickers and terrorists. Its members have agreed to share intelligence and have expressed willingness to partner with outside actors, including the African Union, European Union, United Nations and the United States. In another intervention organized by the Economic Community of West African States, a 7,000-person force helped avoid a crisis in The Gambia. The proactive military intervention there ensured a democratic and peaceful transfer of power after an election.

These types of multilateral arrangements are never simple. They require planning and political commitment. Difficult issues of logistics, command and control, intelligence sharing, and the right of pursuit across borders can cause friction between partners. Missions typically go through an extended period of difficulty before making gains. But the benefits far outweigh the costs.

Multilateral missions, especially those led by African stakeholders, have proven to be some of the most responsive and effective means of preserving peace. Recent history shows that a willingness to discard old rivalries and try new alliances will pay dividends. By learning from past efforts, African security leaders can replicate success. Sharing the burden of security means all can share the benefits of peace.