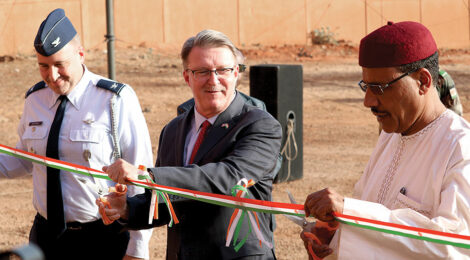 The United States handed over a command-and-control facility and equipment to Niger to support its fight against terrorism. The $16.5 million node will integrate intelligence, surveillance, reconnaissance and existing Nigerien Armed Forces capabilities.

This new building, along with two deployable tactical operations centers, radios and training, will streamline communication with field personnel, the U.S. Embassy in Niamey said.

“We believe all these capabilities are critical to helping Niger defeat Boko Haram and other terrorist organizations wanting to cause harm within its borders,” said U.S. Ambassador to Niger Eric Whitaker.

“The menace of terrorism is still growing and requires our Army to be innovative and take advantage of all means to permit them to anticipate and react quickly,” Interior Minister Bazoum Mohamed said during a handover ceremony, according to Agence Nigerienne de Presse.

Niger has spent the past decade battling extremist groups, including Boko Haram, which has begun attacking refugees in the area bordering Nigeria. In March 2019, Boko Haram killed 88 civilians in Niger, and violence forced 18,000 others to flee, Al Jazeera reported.

“We have a situation where civilians are caught in this crossfire or even being specifically targeted by the Boko Haram,” Babar Baloch, spokesman for the Office of United Nations High Commissioner for Refugees, told Voice of America.