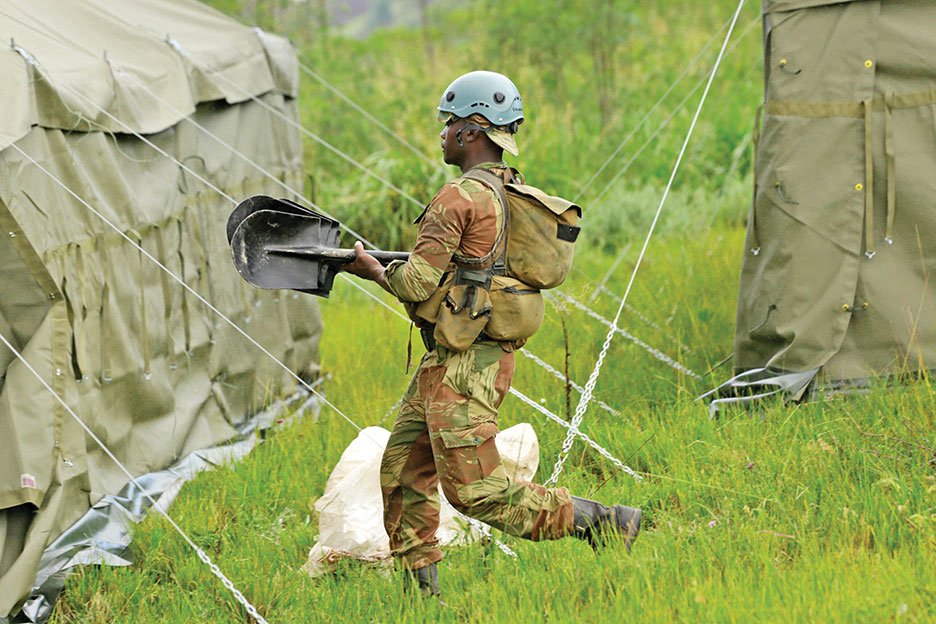 From plowing fields to repairing sewage plants, Soldiers are redefining their roles

The Vaal River in central South Africa is an environmental disaster, threatening the health of 19 million residents who live downstream. Its fate is in the hands of unlikely environmental warriors — the South African National Defence Force (SANDF).

In September 2018, the South African Human Rights Commission inspected the river after allegations that 150 million liters of untreated sewage were spilling into it each day. The commission said, “The site inspection has revealed a prima facie violation of the rights of access to clean water, clean environment and human dignity,” TimesLIVE reported. Of particular concern, officials said, was the possibility of a cholera outbreak.

“There are leakages and pipes that are burst, and all those things are threatening the welfare of the people,” Xundu told TimesLIVE. “We are going to look at our limited engineering capabilities and see what we can do to assist, in particular the substations and the plants.”

One advantage the Soldiers had over civilian engineers is that they were not defenseless against thieves. “All of that area will be declared a military zone so that the military can move in and secure the area, and make sure that the equipment that is going to be used there is not going to be stolen or vandalized,” the general said.

Officials had hoped to fix the problem within a year. As of April 2019, engineers were finding new sources of pollution in the river, in addition to the damaged sewage plants.

The SANDF has years of experience in dealing with environmental problems, but it mostly has been a key player in weather-related disasters. With flooding becoming an almost annual problem in Southern Africa, the SANDF has some of the most experienced rescue teams on the continent.

Col. Andre Pieterse told the South African newspaper Beeld that in one operation alone, SANDF rescued at least 500 people from the raging Limpopo River in Mozambique. This work included hoisting people to safety from rooftops and out of trees.

A SANDF officer told ADF that in South Africa’s neighboring countries, civilians have come to think of SANDF personnel more as rescue workers than as traditional Soldiers.

South Africa is not the only country using its military forces in new ways. In the 21st century, Soldiers are beginning to discover that environmental protection and repair are key elements of peacekeeping, preventing warfare and protecting civilians.

In 2019, Kenyan Secretary of Defence Raychelle Omamo said the Kenya Defence Forces (KDF) would use protection of the environment as the first line of defense to resolve resource-based conflicts, such as those between farmers and herders.

In the past, Omamo said, Soldiers had been deployed to some parts of the country to reinstate order and stability between the two disputing groups in times of drought.

“Environmental degradation and the destructive effects of climate change serve as multipliers for insecurity and conflict and add credence to the enduring connection between peace, good governance and environmental protection,” she said, as reported by the website News Ghana.

Omamo said Kenya’s Armed Forces are not restricted to protecting the country from external aggression. Their role, she said, also can be interpreted to include protection from cyclical threats of hunger, disease and the disruption of livelihood arising from extreme weather. Gen. Samson Mwathethe, Kenya’s chief of defense forces, said the approach continues to bear fruit, but more is needed.

“The KDF is today reaching out in a bid to establish partnerships towards enhancing a secure and healthy world for present and future generations,” he said, as reported by News Ghana.

Nigeria also is taking steps to address environmental challenges. The country has been described as having the worst deforestation problems on the planet. The Nigerian Conservation Foundation says Nigeria has lost 96% of its natural forest cover. One significant cause is the illegal logging of valuable furniture wood for the Chinese market.

Nigerian Armed Forces officials say that they have the added problem of trying to protect an environment for plants and animals while preventing that same environment from being a sanctuary for criminals, kidnappers and terrorists.

In March 2019, the Nigerian Army announced a radical step to help preserve the nation’s wildlife. Army officials announced they were planning to establish “mini zoos” and wildlife parks in all military camps to protect endangered plants and animals.

Maj. Gen. Adekunle Shodunke said the zoos and parks also would serve as recreational areas for military personnel. He asked officials with Nigeria’s National Park Service to help develop “eco-tourism in the zoos and parks and to have them meet international standards,” Vanguard Media reported. The park service pledged its support for the base zoos.

The Rwanda Defence Force (RDF) says a cornerstone of its service is civic involvement. “RDF is mandated to support and contribute to government efforts in poverty reduction, infrastructure development, health care, education and other activities aimed at addressing human security challenges,” said the RDF in a 2019 news release. In mid-April 2019, the RDF rolled out its 2019 Citizen Outreach Program, sending medical equipment, along with farm and engineering tools, into poor parts of the country. Rwandan medical personnel offered free treatment for the sick while other personnel plowed fields and built houses. The annual program lasts about six weeks.

The Rwandan news agency Taarifa said the program anticipated treating 138,000 patients while also working to improve sanitation. The agency said military workers planned to build 1,141 houses for “the most vulnerable citizens across the country.” Soldiers also planned to cultivate 11,139 hectares of farm land while setting aside 45,300 hectares for soil erosion control and environmental protection.

Some of these civic duties taken on by military groups have evolved out of peacekeeping efforts. One conspicuous example is the African Union Mission in Somalia (AMISOM), now in its 12th year. It is the African Union’s longest-running and largest peace operation, and its results have been heavily studied. Research papers have documented the lessons learned from the operation, and how they can be applied throughout the continent.

AMISOM was mandated to help and protect political leaders in Somalia, reconstruct the country’s security forces, support elections, and provide humanitarian assistance. That humanitarian work evolved into reaching out to civilian and government groups in search of ways they could help each other.

In April 2019, AMISOM and civil groups in Somalia resolved to come up with programs that will empower citizens to participate in the affairs of the country.

AMISOM reported that it was working closely with the major players in Somalia to ensure that the transfer of security responsibility to Somali national forces proceeds smoothly and ensures that gains already made in the stabilization process are maintained.

“We want you to take over, and AMISOM is ready to help the people of Somalia make the country a better place to live in,” said Francisco Madeira, head of AMISOM.

Nine Days in a Rescue Operation

In March 2019, Tropical Cyclone Idai struck Southern Africa, moving slowly for five days across Mozambique, Zimbabwe and Malawi. One of the deadliest storms in history, Idai killed more than 1,000 people, with thousands more missing. The total death toll may never be known.

After the storm, the South African National Defence Force (SANDF) assisted in rescue efforts in Malawi and Mozambique. According to defenceWeb, the SANDF kept this report:

Friday, 15 March: The SANDF flew in a team of specialists to the flooded areas to assess what kind of humanitarian assistance was needed.

Saturday, 16 March: After a successful assessment in both countries, SANDF deployed a team of 10 military health practitioners with search-and-rescue air forces to Malawi. The same day, an Oryx medium-utility helicopter and a CASA-212 light-transport plane also were dispatched to Malawi.

Sunday, 17 March: Despite persistent rains and wind in Mozambique, SANDF managed to land a first team in preparation for the arrival of humanitarian relief workers. Officials deployed two Oryx helicopters for continuous duty. They deployed one A109 light helicopter for search and rescue, a C-212 for personnel and equipment transport, and a PC-12 aircraft for reconnaissance.