Browse: Home   /   Seychelles President Calls for Action to Save Seas 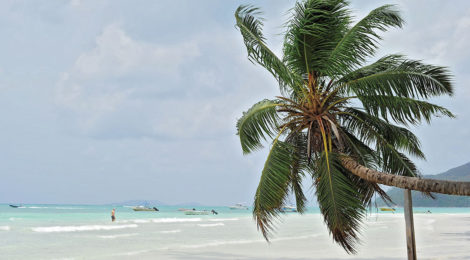 Seychelles President Calls for Action to Save Seas

President Danny Faure of the Seychelles spoke for island nations around the world by calling for action to clean up the ocean. He spoke at the Group of Seven (G7) meeting in Quebec, Canada, and displayed photographs of plastic waste piling up on the nation’s beaches.

“Islands can no longer afford to see ourselves as dots lost in a sea of blue,” Faure said in June 2018. “We are sentinels, the guardians of two-thirds of our blue planet’s surface. We must act accordingly.”

To make his point, Faure showed photos of Aldabra, a coral atoll and UNESCO World Heritage Site in the Seychelles. Mounds of waste floating in from all over the world are choking this ecologically rich marine habitat.

Faure said all island nations need help “handling the vast and increasing amounts of marine litter washing up on and polluting their beaches and coasts from way beyond their shores.”

Faure was invited to a special session on oceans at the G7 summit by Canadian Prime Minister Justin Trudeau since Canada held the G7 presidency for 2018. The session was given the theme “healthy, productive and resilient oceans and seas, coasts and communities.”

In his address, Faure spoke about the Seychelles’ innovative financing for its blue economy and ocean sustainability.

When the Seychelles was designated as a high-income country in 2015, it lost access to certain grant funding. Faure said that instead of complaining, the  nation turned to innovative sources of financing. This included a first-of-its-kind debt swap for ocean conservation and climate adaptation and forthcoming “blue bonds.” Supported by the World Bank, blue bonds will seek to attract public and private investment to support the nation’s fisheries and protect marine resources.