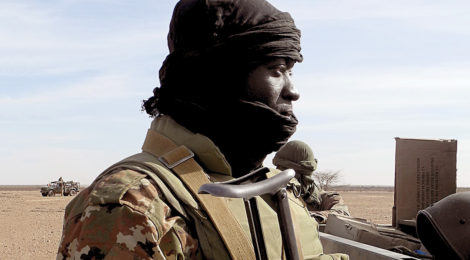 Thick, black smoke spewed into the sky above the city of Ouagadougou, Burkina Faso, in March 2018, evidence that radical jihadists again had attacked the bustling capital in Africa’s western Sahel region.

The two-pronged attack targeted the French Embassy and Burkina Faso’s military headquarters. The assault killed eight Burkinabe Soldiers and eight assailants. Eighty other people were injured. It was the third extremist attack in the city in just more than two years.

Security Minister Clément Sawadogo told journalists that the attack appeared to have targeted senior Army officials and might have sought to “decapitate” Burkinabe military leadership. It would have been successful, he said, except that the meeting was moved to a new location at the last minute. 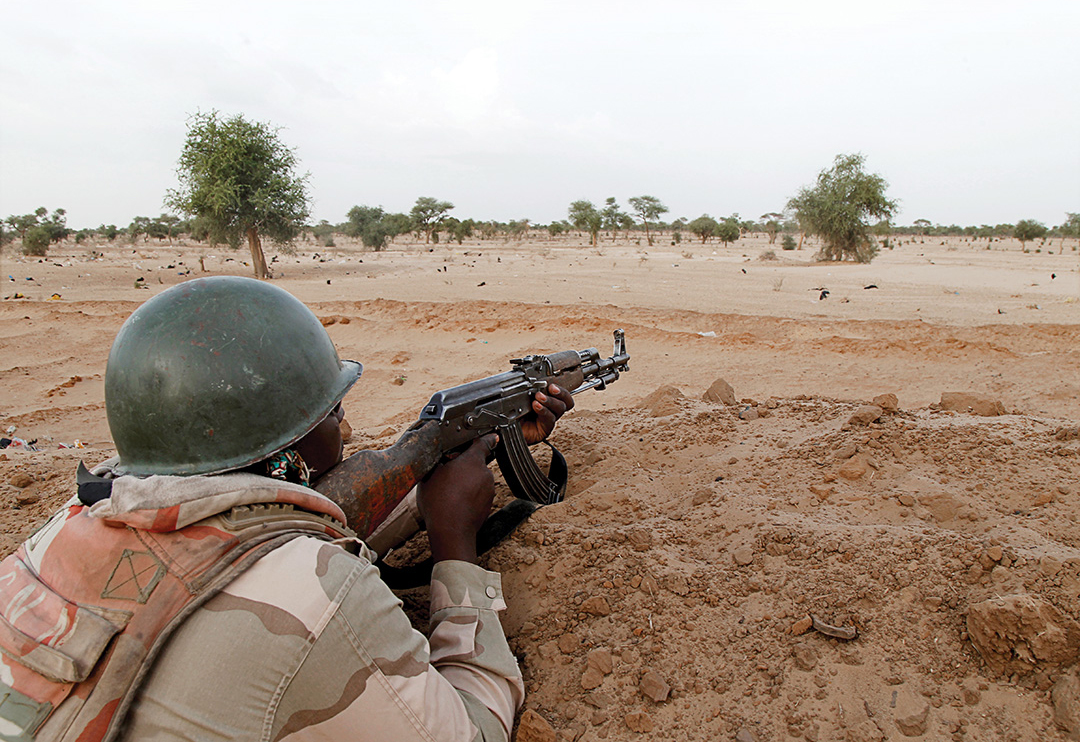 A Nigerien Soldier near Diffa guards the border with Nigeria. REUTERS

This was not the first such incident in Burkina Faso. An August 2017 attack killed nearly 20 people and injured as many more when gunmen on motorcycles fired on a Turkish restaurant. In January 2016, members of al-Qaida in the Islamic Maghreb killed at least two dozen people at a hotel and coffee shop on the same busy street, according to The Washington Post.

Unlike Mali, its neighbor to the north, Burkina Faso is not home to a United Nations peacekeeping mission or the site of a multinational military action to displace an insurgency. However, the nation is just the latest example underscoring the dangers that lurk in the Sahel, a transitional geographic region that separates the Sahara to the north from humid savannas in the south. The Sahel stretches from Senegal eastward nearly 4,000 kilometers through Eritrea to the Red Sea.

After attacks in Burkina Faso, continuing unrest in Mali and an armed Islamist insurgency in Nigeria that has spread to Cameroon, Chad and Niger, five countries have decided to take action to secure their borders and protect their people.

Already, the Sahel region is packed with forces trying to stave off insurgencies and unrest. The United Nations Multidimensional Integrated Stabilization Mission in Mali (MINUSMA) was established in 2013 to restore order after a 2012 coup preceded a Tuareg uprising in the north. French forces launched Operation Serval in early 2013 to beat back Islamist advances in northern Mali. Chad marched 2,000 of its own troops into Mali to join the fight.

G5 member Niger must be mindful of the Malian border to its west, Boko Haram incursions in its southeast Diffa region, and trafficking through its north into a chaotic Libya. Niger — with Benin, Cameroon, Chad and Nigeria — is part of the Multinational Joint Task Force (MNJTF) that is battling Boko Haram in the Lake Chad Basin.

Finally, France remains in the region through Operation Barkhane, a 4,000-strong force that evolved out of Serval in 2014 and is based in Burkina Faso, Chad and Mali.

Into this mix the G5 Sahel Joint Force (or the Force Conjointe du G5 Sahel as it is known) unites Burkina Faso, Chad, Mali, Mauritania and Niger in a fighting force that will join the effort to bring security to the troubled region. The task ahead will be complex. In short, the G5 Sahel Joint Force will be one of many military efforts in a region with many disparate problems caused by an array of different groups.

The G5 Sahel began in 2014 to foster economic cooperation and security among its five member nations. Three years later, the alliance decided to launch its joint security force to address growing concerns of drug trafficking, human trafficking and terrorism. The African Union and the United Nations Security Council endorsed the Sahel force, which expects to be “at the forefront of transnational security efforts in the Sahel for the near future,” according to “The G5 Sahel Joint Force Gains Traction,” a February 9, 2018, article for the Africa Center for Strategic Studies (ACSS).

The force’s concept of operations has four pillars, according to the ACSS paper. It will seek to:

The force will consist of up to 5,000 mostly military troops from the five member states. That total will include seven battalions of 550 Soldiers each: one battalion each from Burkina Faso, Chad and Mauritania, and two each from Mali and Niger. Mali and Niger also will provide 200 gendarmes each, while the other three countries offer 100 police or gendarmes each, the ACSS paper states. Troops will be spread across three sectors: the Western, which is Mali and Mauritania; Central, which is Burkina Faso, Mali and Niger; and Eastern, which is Chad and Niger. The force headquarters is in Sévaré, Mali, and secondary command posts are planned for each sector.

The Western Sector will be headquartered in Nbeikit, Mauritania, and will be commanded by Col. Salem Vall Ould Isselmou of Mauritania. It was unclear in April 2018 where the remaining sectors’ headquarters would be set up. 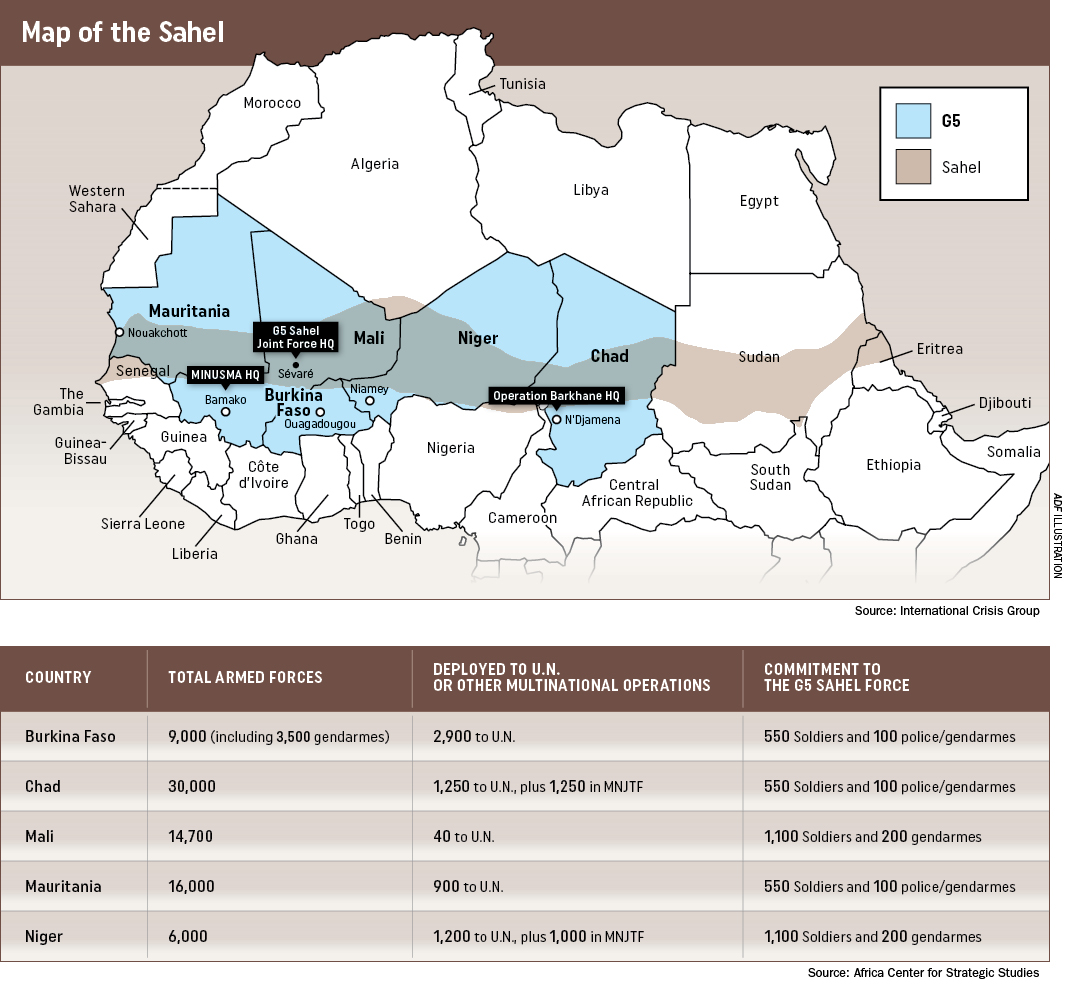 It was in part of this three-country border area, known as the Liptako-Gourma region, that the G5 Sahel Joint Force undertook its first operation between October 27 and November 10, 2017, according to Jane’s 360. The operation, called Hawbi, which means “black cow,” reportedly included 350 Soldiers from Burkina Faso and 200 each from Mali and Niger in an area that has seen an upsurge in militant violence. French troops assisted with armored vehicles and explosives specialists.

“The operation … aims to achieve an area of control in this region of three borders to fight against armed groups and trafficking, in order to allow the return of a level of security favorable to the tranquility of the populations,” the G5 Sahel said in a prepared statement.

On January 14, 2018, the joint force embarked on its second operation, called Pagnali, which means “thunder” in the Fula language. The operation centered on the border of Burkina Faso and Mali. Force Commander Gen. Didier Dacko of Mali told French radio station RFI that the operation involved one battalion each from the two countries operating in an area of about 8,000 square meters south of Boulikessi, Mali, and Nassoumbou, Burkina Faso.

“Allow me to say, bluntly, that with the Pagnali operation, the joint force of the G5 Sahel countries asserts itself as a Sahelian force that knows the field, having a capacity of adaptation and a good coordination with the national armies,” Dacko said.

Coordination will be essential as the G5 Sahel Joint Force continues its work.

The Sahel in general, and G5 Sahel nations in particular, are teeming with internal and external security threats. The situation in Mali is especially thorny. MINUSMA has been operating there since 2013 amid a complex array of armed militant groups.

Jama’a Nusrat ul-Islam wa al-Muslimin’ (JNIM), which means “Group for the Support Islam and Muslims,” is a militant jihadist organization. It formed when Ansar al-Dine, the Macina Liberation Front, Al-Mourabitoun and the Saharan branch of al-Qaida in the Islamic Maghreb merged in March 2017. All four groups had been active for years in Mali. JNIM now is the official branch of al-Qaida in Mali.

Other groups, such as the Movement for Unity and Jihad in West Africa, also have been active in Mali.

With the presence of MINUSMA and France’s Operation Barkhane, one concern is that the G5 Sahel Force may contribute to a “security traffic jam” in Mali and beyond. Chad and Niger are among the nations participating in the MNJTF to eliminate Boko Haram. Although the MNJTF’s mandate is sharply drawn, its proximity to the G5 Sahel Force’s activities “suggests the need for operational coordination” with the MNJTF, especially in Chad and Niger, according to the Peacekeeping and Stability Operations Institute. 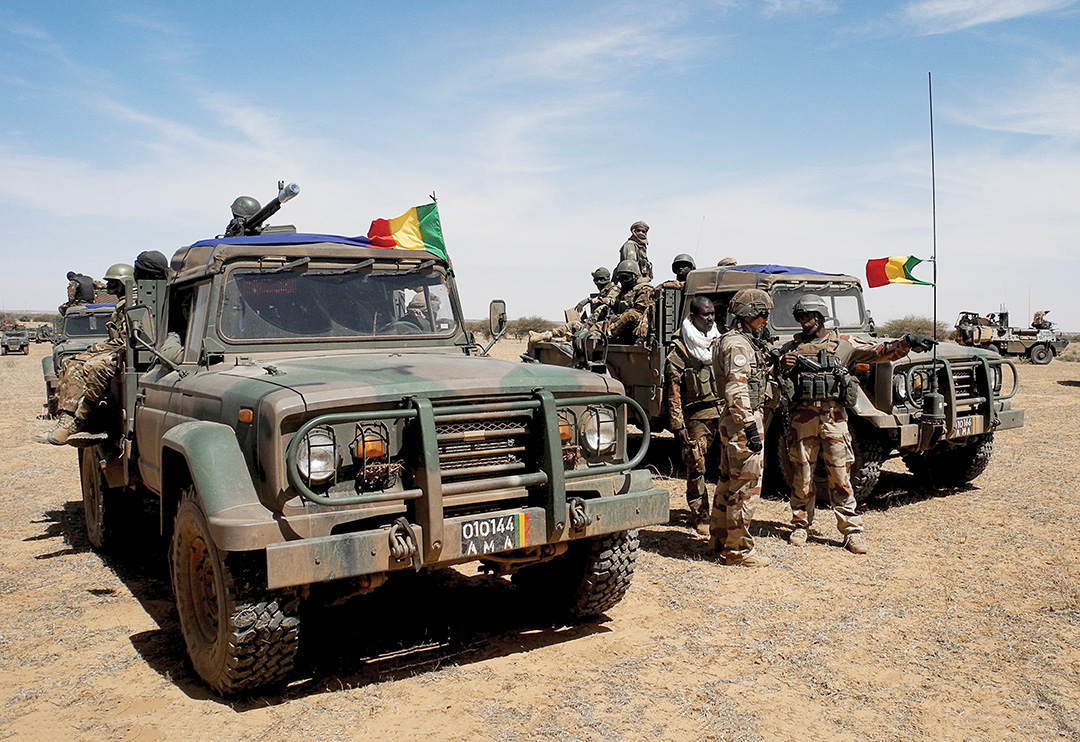 Malian Soldiers take part in Operation Hawbi in central Mali, near the borders with Burkina Faso and Niger, in November 2017.
AFP/GETTY IMAGES

“Given that some of the same security partners are involved in each of these missions, efforts in clarifying their respective roles and reconciling mandates is central to the overall counterterrorism and stabilization effort,” the ACSS paper states.

The G5 Sahel Force already is working with France’s Operation Barkhane, and it will be important to define areas of cooperation while respecting missions’ different mandates, said Col.-Maj. Léon Traoré, chief of Army staff for Burkina Faso. The new force also can enhance the efforts of participating nations without supplanting those efforts.

“The idea is to mutualize our forces and our efforts, to combine our capacities by sharing intelligence and to pool the way we do things so we can reach a shared goal,” Traoré told ADF. “I think the philosophy that supports the G5 is that. It is: Unity makes strength. Shared effort to do what we can together to combat what has become a common enemy.”

Andrew Lebovich, a visiting fellow with the European Council on Foreign Relations, wrote in March 2018 that the G5 Sahel Force’s security efforts and progress also must be balanced with efforts to improve governance and justice while protecting local civilians, who can be endangered or displaced by fighting. G5 operations such as Operation Pagnali have driven refugees into areas of Mali already suffering from crime, communal differences and food insecurity.

Stifling militant recruitment has been a challenge in Mali, and it underscores Lebovich’s point about improving governance. The appeal of militant groups is obvious, Boubacar Hassane, a U.N. military observer in Sévaré told Bloomberg news service.

“It’s because of poverty,” Hassane said. “A guy without a job can’t get a wife. Imagine, there’s nothing out there for him and then the jihadists offer him money. They pay well — sometimes even $200 a day. No other job will ever pay that much.”

The ACSS paper states that economic development is part of the effort’s concept of operations. That, more than anything, will help blunt the appeal of jihadist recruitment and propaganda, especially when coupled with security forces that uphold the highest standards of professionalism and respect for human rights.