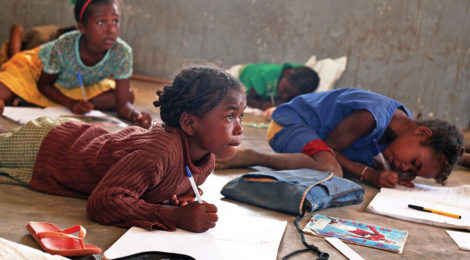 Madagascar’s public education spending fell in 2009 after a political crisis, putting thousands of children at risk of having to leave school. Others had to drop out because their families could no longer afford to educate them. With a sharp drop in foreign financing, public spending on education had fallen since 2010. Nationwide, few schools were built, teacher and student materials were not supplied, and many schools did not receive government funding.

Emergency funding is helping to overhaul basic education. The Madagascar Emergency Support to Education for All project aims to keep children in primary school by reducing costs to families, paying subsidies to teachers and providing school kits to students.

The project, launched in 2013 by the World Bank, has shored up a crumbling education system.

By the end of the four-year project, it had deployed in 12 Malagasy regions, reaching more than 2 million people. The project enrolled nearly 1.9 million children in school, paid 20,000 teachers and distributed more than 5 million school kits. In Madagascar’s three drought-stricken regions in the south, the project enabled more than 100,000 children to eat in school cafeterias. The project built more than 260 classrooms and trained 50,000 teachers.

It paved the way for the new $100 million Basic Education Support Project funded by the World Bank and the Global Partnership for Education. The project improves learning in the first two years of education in Madagascar.