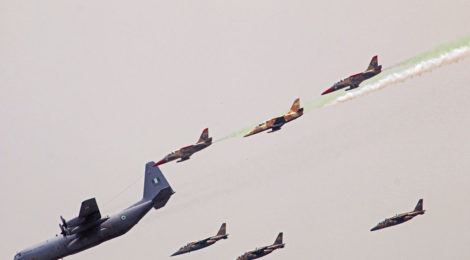 The Nigerian Air Force (NAF) has acquired 30 aircraft and activated 13 grounded ones in the past three years in an effort to expand and modernize its air fleet.

Chief of Air Staff Air Marshall Sadiq Abubakar discussed the acquisitions at the inauguration of the new Headquarters of Air Training Command at the Air Force Comprehensive School in Kaduna.

“I am very happy,” Abubakar said in the speech as reported by the newspaper New Day. “In the last three years, we were able to acquire 18 aircraft; similarly the federal government has paid for [an] additional 12 aircraft.”

He said the NAF believes new hardware acquisitions should be made in concert with refurbishing existing planes.

“Professionalism is also ensuring that we activate what currently we have; hence we embarked on renovation of our grounded aircraft,” he said.

Abubakar said the new facilities include a principal staff officers quarters and a sports complex. The construction was completed in eight months and inaugurated in September 2018. Abubakar said the NAF is increasing the number of personnel it recruits and trains from 1,000 to 1,500 people annually, New Day reported.

The NAF, including the Air Task Force of Operation Lafiya Dole, has played a key role in turning the tide against the extremist group Boko Haram in the Lake Chad Basin. In a keynote address at the Nigerian Air Force International Air Power Seminar in November 2018, Nigerian President Muhammadu Buhari spoke about the importance of the Air Force. He commended its success against the insurgency and urged the Air Force to continue to modernize and not “rest on its oars.”

“We have denied [Boko Haram] the ability to hold territory and the freedom of movement to operate at will, and they now resort to skeletal attacks on soft targets.”