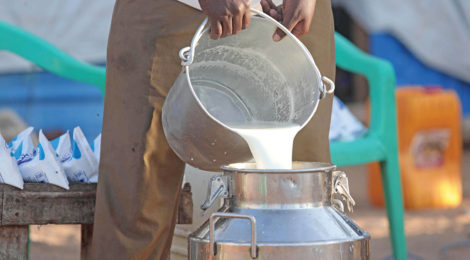 Parts of the country still are plagued by violence, but a degree of stability in the capital in recent years has begun to attract investment from locals and Somalis living abroad.

Some see opportunities in the livestock industry, whose mainstay is traditional breeds of cattle, reared by pastoralists. These breeds produce little milk. A devastating drought recently killed off thousands of cows and camels.

Yusuf Abdirahman Dahir, 49, who manages Som Dairy and owns it with his brothers, said they so far have spent $370,000 importing the cattle and infrastructure for milk production, processing and distribution.

“We want to revive the Somali dairy industry that got destroyed in the violence,” he said at the dairy facility, a high stone-walled compound where workers tended to the cattle.

The dairy, 2 kilometers outside the capital, produces 600 liters of milk daily from 35 cows. There are 54 dairy cows on the property, but some are not being milked due to calving.

The first batch of Holstein Friesian cows, which are native to the Netherlands and Germany, died due to the heat. In Somalia, temperatures average above 30 degrees Celsius.

Som Dairy imported its first cows in 2016 and has become profitable, Dahir said.

Local farmers have been impressed by the new breed of cows in town, and several have brought their herds to crossbreed them with the imported bulls, Dahir said. Mogadishu residents are developing a taste for fresh milk after years of drinking imported powdered milk that is mixed with water.

Shopkeeper Nuradin Haji Omar buys 20 liters of milk daily from Som Dairy, up from 15 when he began buying in 2017: “We are very thankful to the dairy company for the good business.”