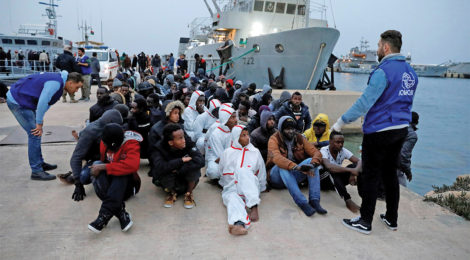 The European Union plans to rapidly expand the training of Libyan Coast Guard personnel to stem migrant flows to Italy and to reduce deaths at sea.

Rear Adm. Enrico Credendino, chief of the EU naval mission in the Mediterranean, said the EU’s Operation Sophia hopes to train 300 to 500 personnel by the end of 2018. Since 2016, the operation has trained 188 Libyans, which contributed to a sharp decline in the number of attempted crossings in the second half of 2017.

Libya remains the main departure point for Sub-Saharan African migrants trying to reach Europe by sea, though the level of migrant smuggling by Libyan armed groups has dropped under European pressure.

More than 130 alleged smugglers have been arrested at sea and handed to Italian authorities, but major migrant smugglers in Libya have largely acted with impunity, out of reach of international authorities.

“We are working with a lot of international actors — Interpol, Europol, Frontex. … We are building a picture, but it’s too early to make an actual assessment,” Credendino said.

Operation Sophia has destroyed more than 500 intercepted smuggler boats, in addition to those destroyed by the Italian Navy, but Credendino said it was impossible to block the import of flimsy rubber dinghies commonly used by smugglers.