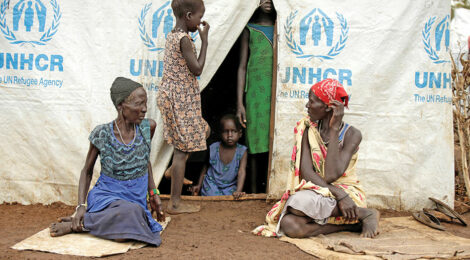 Ethiopia has passed a law giving almost 1 million refugees the right to work and live outside of camps, in a move praised for providing them with more dignity and reducing reliance on foreign aid.

Home to Africa’s second-largest refugee population after Uganda, Ethiopia hosts more than 900,000 people who have fled conflict, drought and persecution in neighboring countries such as Eritrea, Somalia, South Sudan and Sudan.

The refugees — many of whom sought refuge decades ago and have children born in Ethiopia — are largely confined to one of about 20 camps across the country. Most are not permitted to work.

“We are happy to inform that the new refugee proclamation has been enacted by the House of Peoples’ Representatives of the Federal Democratic Republic of Ethiopia,” Ethiopia’s Administration for Refugee and Returnee Affairs said. “It is strongly believed that the new law will enhance the lives of refugees and host communities.”

With record numbers of people being forced to flee their homes, most of the world’s 25 million refugees are hosted by developing countries in camps where funding shortages often leave them short of basics such as food and education.

The new law is in line with Ethiopia’s commitment to the United Nations Global Compact on Refugees, adopted by world leaders to increase refugees’ self-reliance and ease the pressure on host nations.

The law allows refugees to move out of the camps, attend regular schools, and to travel and work across the country. Refugees can formally register births, marriages and deaths, and will have access to financial services such as bank accounts. It will allow more refugees to live in urban areas, secure limited work permits, give some access to farmland and increase education enrollment for refugee children.

“The law will help refugees feel included and that they can contribute to society,” said Dana Hughes, spokeswoman for the United Nations refugee agency in East Africa. “But we must remember that access to education and employment doesn’t just benefit refugees; it also contributes to the economy and benefits local communities. Such legislation isn’t just the right thing to do — it’s the smart thing to do.”