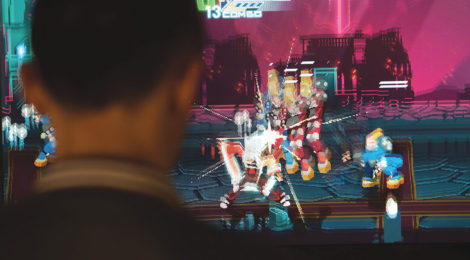 “The penetration of mobile devices in Africa is huge. People often have two or three phones, which is pretty crazy,” said Spreckley, 40. “So that’s one of the big pluses and why we are trying to do this,” he said, promoting Invasion Day, which will likely launch on Apple’s App Store and Google’s Play platform in 2019.

Many other African developers also are opting to tailor games for mobile devices instead of traditional consoles or desktop computers.

“There’s enormous potential in Africa because the continent is primarily mobile,” said Sidick Bakayoko, 34, founder of Paradise Game, an umbrella group for developers in Côte d’Ivoire. He joined African game coders, developers and artists with top executives from Sony and other industry giants at the Africa Games Week convention in Cape Town.

Bakayoko said the increasing number of African gaming products for hand-held devices mirrored the explosion of mobile banking and financial tools such as Kenya’s Mpesa.

Spreckley hopes Invasion Day will catch the eye of a major investor, but many African mobile game developers have struggled to turn creations into cash. Google’s decision in June 2018 to let African game developers make money from creations sold on its Play Store could revolutionize the sector.

“Most people use [Google] Android here,” said Sithe Ncube, 24, founder of Zambia’s Ubongo Game Lab. “People haven’t had a way to monetize their mobile games. People have actually been developing apps for a while, but there hasn’t been a way to use it as a business model.”