A Web of Threats, A World of Potential - Africa Defense Forum
Africa Defense Forum
ADF is a professional military magazine published quarterly by U.S. Africa Command to provide an international forum for African security professionals. ADF covers topics such as counter terrorism strategies, security and defense operations, transnational crime, and all other issues affecting peace, stability, and good governance on the African continent. 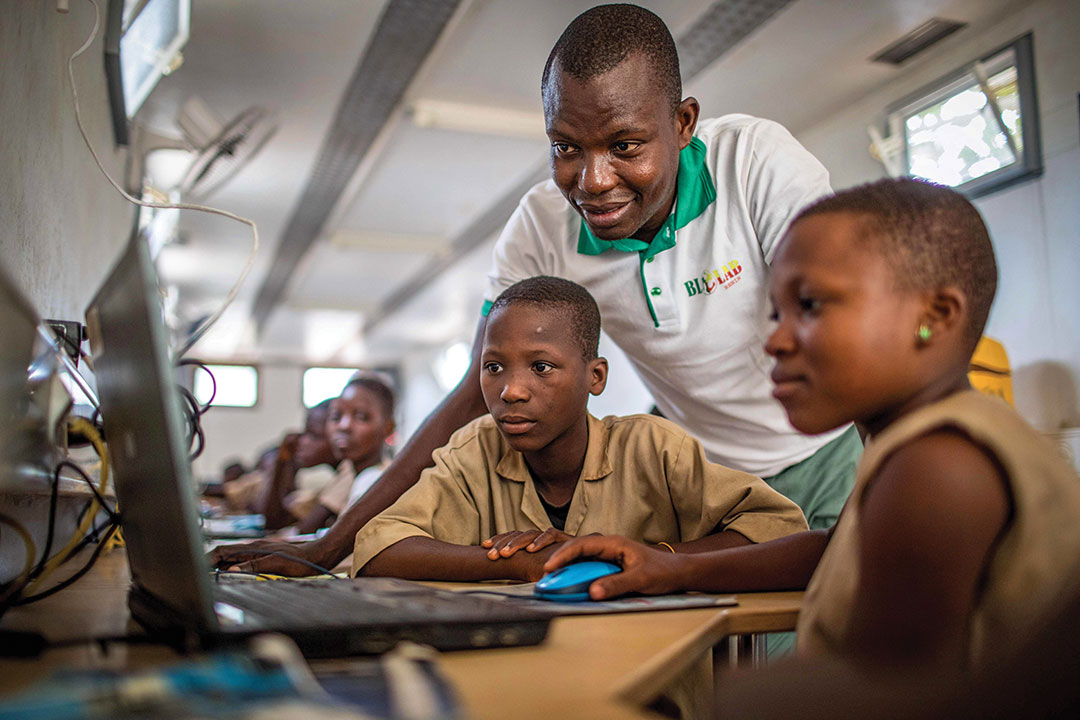 A Web of Threats, A World of Potential

As Africa Closes the Digital Divide, It Must Improve Cyber Security

Internet penetration in Africa lags behind much of the world, but the continent is catching up fast. Nations are investing heavily in fiber optic cables and other means to bring the internet to people of all income levels. Between 2017 and 2018, Africa achieved 20 percent growth in internet access, the fastest growth rate in the world. In Benin, Mozambique, Niger and Sierra Leone, the number of internet users more than doubled during that time. Today, 52 African countries are connected to submarine internet cables or a fiber optic network, and 44 percent of people live within 25 kilometers of a fiber node that provides high-speed internet. Although this growth opens many avenues for economic development and improved governance, it comes with risks. 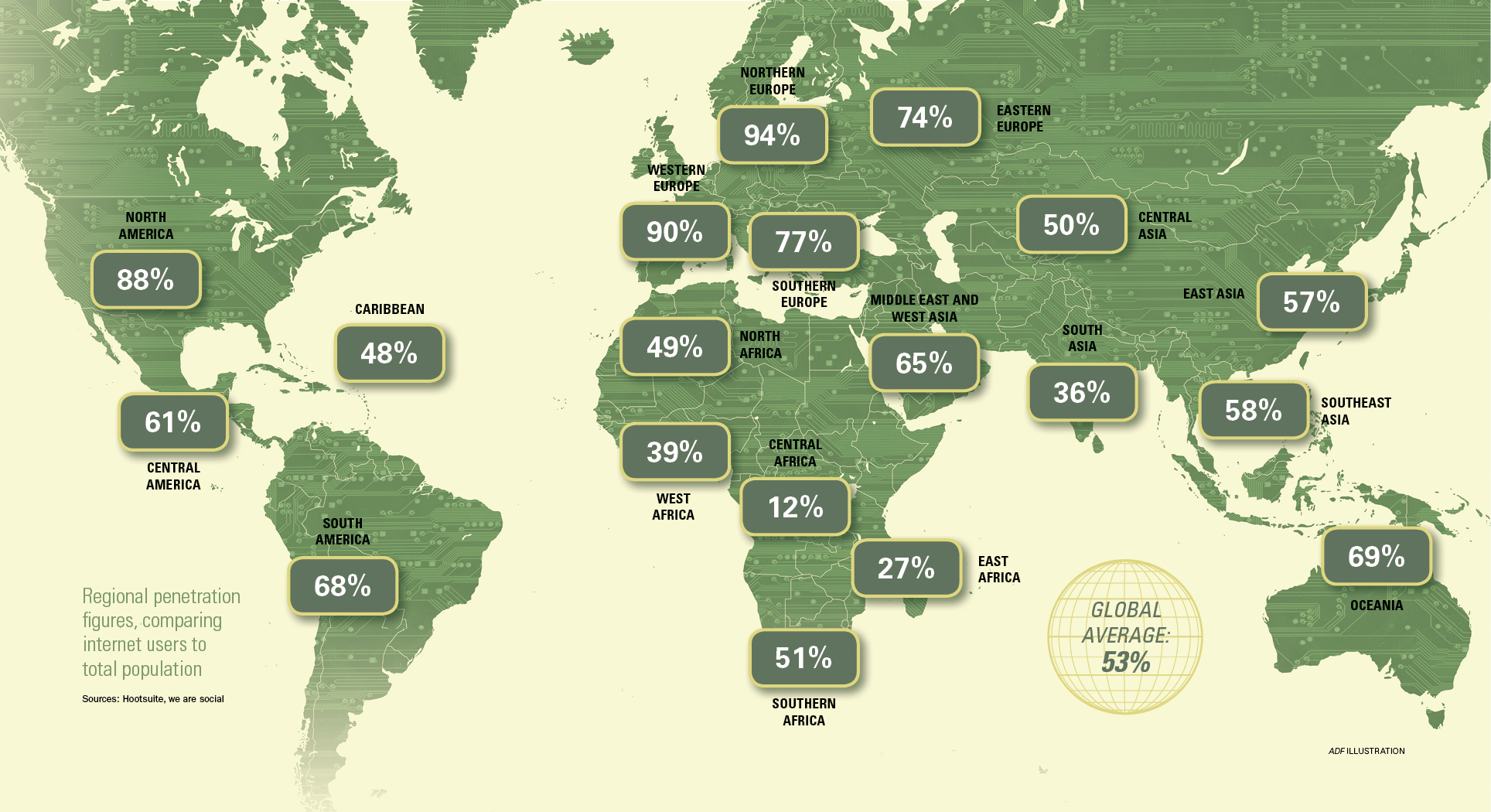 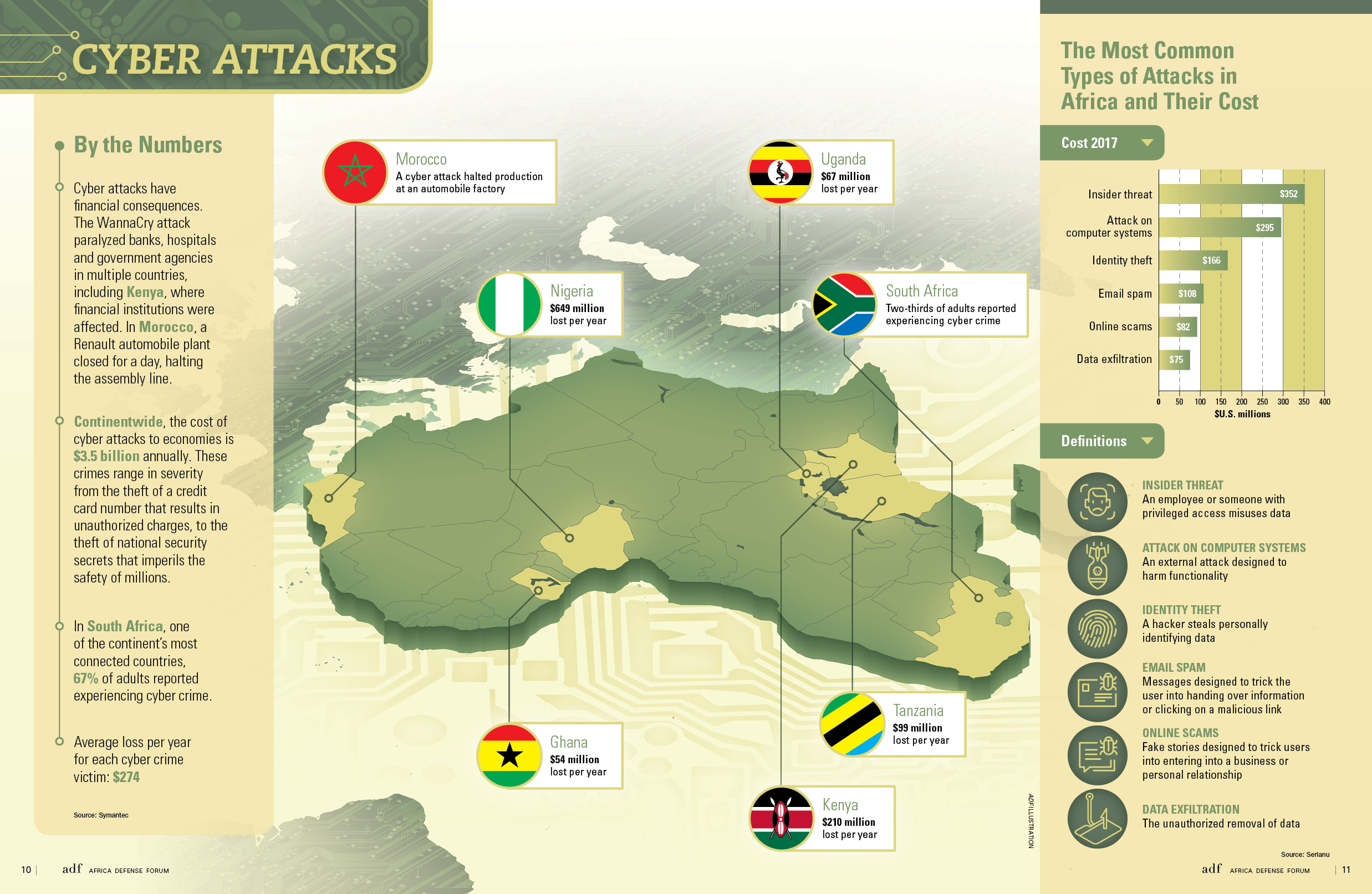 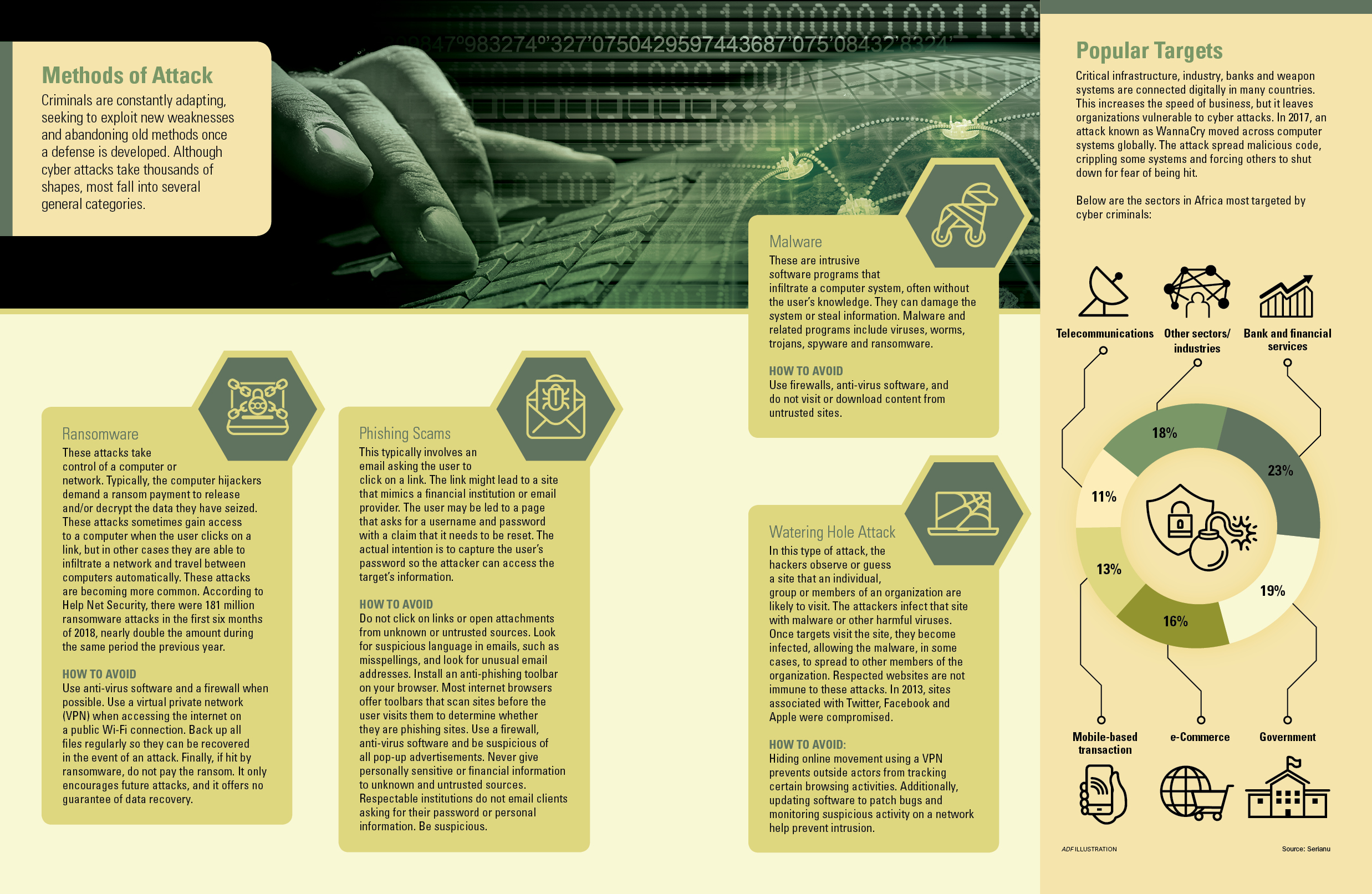 Cyber attacks are becoming the tactic of choice by those who like to strike from a distance and at a relatively low cost. Groups such as hostile foreign governments, activists, terrorists and criminals now use these tactics. “The threat of cyber attacks has gained a foothold in Africa, yet governments and the private sector are yet to invest in adequate defenses to curb their spread,” said William Makatiani, CEO of the Kenyan cyber security company Serianu. “Securing data should therefore be a priority for public and private institutions in the light of rapidly evolving threats.”

Electrical grids, water and sewer systems, subways, dams and even nuclear power plants have been the target of cyber attacks. In many parts of the world, these are operated by outdated systems and are particularly vulnerable to hackers. One example is the December 2015 attack on the power network in Ukraine. Attackers reportedly used a phishing email to gain access to the power grid and cause a power failure affecting 230,000 people.

Modern weapon systems have essential embedded software and information technology. This could include targeting systems used to fire missiles, flight software and weapons-launching mechanisms. Although this connectivity allows for advances in fighting wars, it also leaves these systems open to intrusion and disruption by adversaries.

Banks are the most common targets of cyber attacks. In some attacks, criminals use malware or other methods to gain access to stored information such as credit card numbers, login credentials and government-issued ID numbers. Other attacks aim to deny service and cause system failures. Overwhelming a server with simultaneous requests can paralyze it. In 2017 in Kenya, customers of M-Shwari, a mobile banking service, were locked out of accounts for five days. Once access was restored, some reported missing money.

Government offices are an attractive target for cyber criminals. Some attackers use ransomware to take over governmental websites; others seek to steal confidential or classified information held by the government. Sometimes the aim is to make a political statement. A notorious hacker in South Africa has taken over the websites of the presidency, the treasury, Cybersecurity Hub and the Department of Environmental Affairs to display political messages. 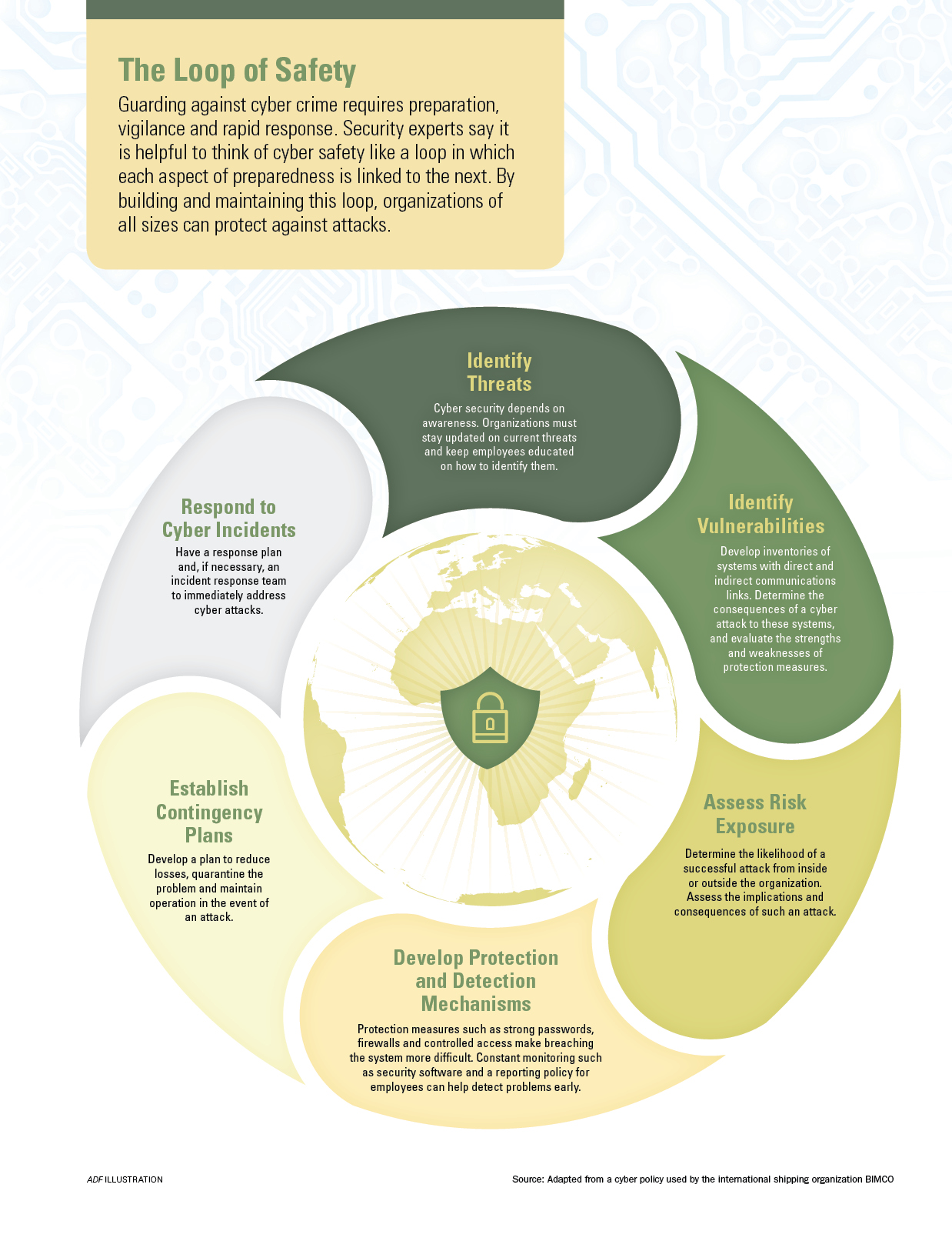 Who Defends the Web?