The Women Warriors of Dahomey 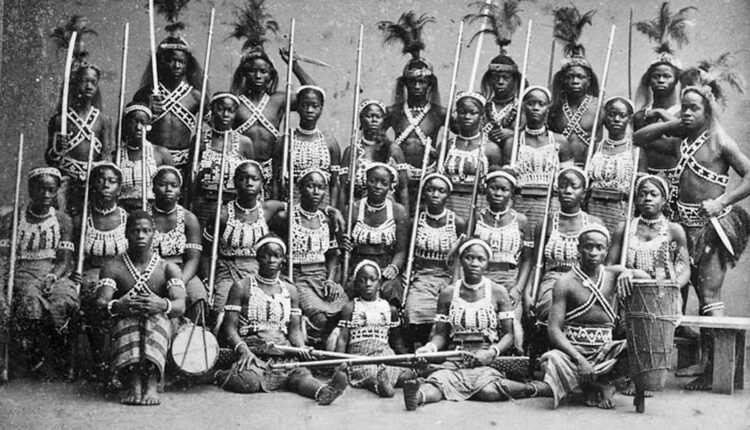 In 1861, 3,000 heavily armed female Soldiers charged a thorny wall during a skills demonstration.

King Glele, their ruler in Dahomey, a region that is now part of Benin, was eager to show off the ferocity and skill of his warriors. The 400-meter-long wall bristled with acacia branches with 5-centimeter-long, needle-sharp thorns.

The women were barefoot, armed with clubs and knives. Some of them — “Reapers” — had 1-meter-long razors that, the king said, could be used to cut a man in half.

The warriors charged the wall, ignoring the savage wounds caused by the thorns. They clawed their way to the top, simulating hand-to-hand combat with an invisible enemy. They fell back and climbed the wall a second time, this time rescuing a band of villagers acting as prisoners.

The demonstration proved to the visitors that the women were not merely ceremonial figures. They were, in fact, the only female Soldiers in the world at that time who served in combat.

The women warriors of Dahomey probably originated in the 17th century. One theory states that they began as hunters in the Fon tribe. However, Stanley Alpern, the leading expert on the warriors, wrote in his 1998 book, “Amazons of Black Sparta,” that they likely began as palace guards in the 1720s. They came to be known as “Mino,” which means “Our Mothers” in the Fon language.

The Dahomey women fought in major battles. Alpern said that in four major campaigns in the late 19th century, at least 6,000, and as many as 15,000, died in battle.

There are several theories as to how the Dahomey warriors came to be, but most believe it was a matter of necessity — the Fon men, as a result of wars and the slave trade, were outnumbered 10 to 1 by their rivals in the Yoruba tribe. As a result, Fon women were recruited to fight.

There were only about 600 Dahomean female warriors until the mid-19th century, when King Ghezo increased their numbers to about 6,000. He was likely able to recruit many women to live as warriors because Dahomey women of that time lived in poverty and often were treated poorly.

As warriors, the women lived in the king’s compound. Explorer Sir Richard Burton reported that the women were supplied with food, tobacco, alcohol and slaves.

The warriors were exhaustively trained to fight, to endure great pain and to survive. Observers said that although they were not good with firearms, they were experts in hand-to-hand combat and the use of knives.

Until the beginning of the 20th century, the women were in a state of constant war at the behest of their ambitious kings. But when the French invaded with modern weapons, the women were defeated and their ranks disbanded.

Their bravery is summed up in a credo the women reportedly repeated to show their spirit: “Those coming back from war without having conquered must die. If we beat a retreat our life is at the king’s mercy. Whatever town is to be attacked we must overcome it, or we bury ourselves in its ruins.”