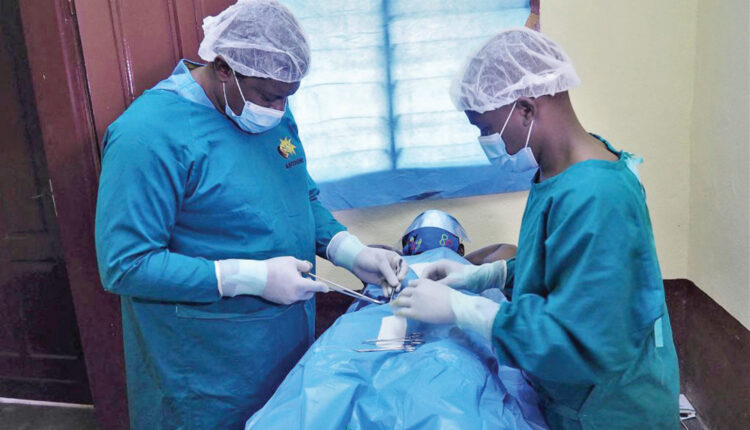 During the week, Dr. Georges Bwelle, 49, specializes in intestinal surgery at the main hospital in Yaoundé, Cameroon’s capital. On weekends, though, he takes to the road.

He leads a team of volunteers that crams into a minibus and heads out into remote areas. The tiny mobile clinic provides basic health care to those in need.

Volunteers brought in equipment, transforming a room near the cells into a small field hospital, with departments for general medicine, ophthalmology, dentistry and minor surgery.

An inmate, 35, soon emerged from the operating room after surgery to repair a hernia.

“Thank God I have been freed from this ailment — the doctors looked after me,” he said.

Bwelle’s drive to help others can be traced to his childhood.

Born into a family of modest means, the young Bwelle saw his father’s health deteriorate because he had no access to a specialist doctor after a road accident.

After his studies, Bwelle began to travel throughout his country.

“With the little money I had, I bought medicines and treated three or four people, then 10, then 100,” he said.

Little by little, a team of doctors with a panoply of skills gathered around him.

In 2008, he set up ASCOVIME, an acronym in French meaning Association of Skills for a Better Life.

Most of the time, ASCOVIME visits rural areas where health care is scarce and difficult to access.

The most frequent medical complaints are malaria, joint pain and hernias — problems linked to working the land, Bwelle said.