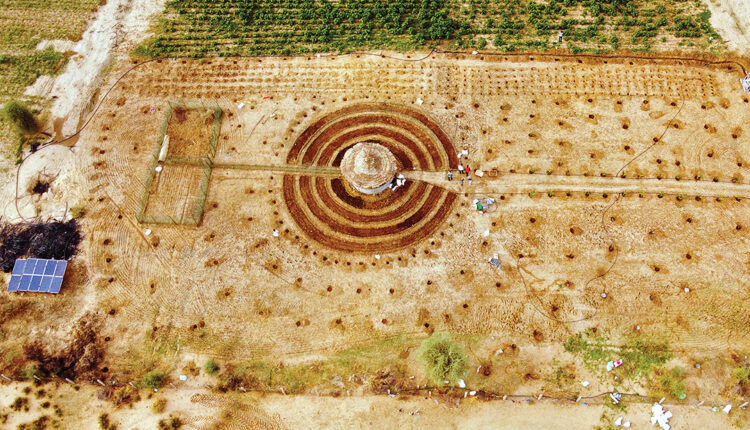 Every night Moussa Kamara works at his bakery in Senegal, preparing hundreds of loaves. But at sunrise, instead of going home to sleep, he starts a second back-breaking job — hoeing the earth and tending newly sown seeds in a specially designed circular garden.

Kamara, 47, believes the garden will prove even more important than the bakery in the future for feeding his extended family, including 25 children, and other residents of Boki Dawe, a town near the border with Mauritania.

He is part of a project that aims to create hundreds of such gardens, known as “Tolou Keur” in Senegal’s Wolof language, that organizers hope will boost food security, reduce regional desertification and engage thousands of community workers.

“This project is incredibly important,” Kamara said, finally at home after a night spent at the bakery followed by 10 hours of cultivating edible and medicinal plants in the garden. “When you grow one tree, over 20 years people and animals will benefit from it,” said Kamara, whose commitment and hard work have earned him the role of garden caretaker.

The project marks a new, more local approach to what is known as the Great Green Wall initiative, launched in 2007, that aims to slow desertification across Africa’s Sahel region, the arid belt south of the Sahara, by planting an 8,000-kilometer line of trees from Senegal to Djibouti.

The wider initiative has managed to plant only 4% of the pledged 100 million hectares of trees. Completing it by 2030, as planned, could cost up to $43 billion, according to United Nations estimates.

By contrast, the Tolou Keur gardens have flourished in the months since the project began and now number about two dozen, said Senegal’s reforestation agency.

“A thousand Tolou Keur is already 1.5 million trees,” said Aly Ndiaye, a Senegalese agricultural engineer who is credited as the mastermind behind the circular bed design. “So if we start, we can do a lot.”