Africa’s militaries were thrust into unexpected roles during the pandemic. They hope to learn from successes and failures. 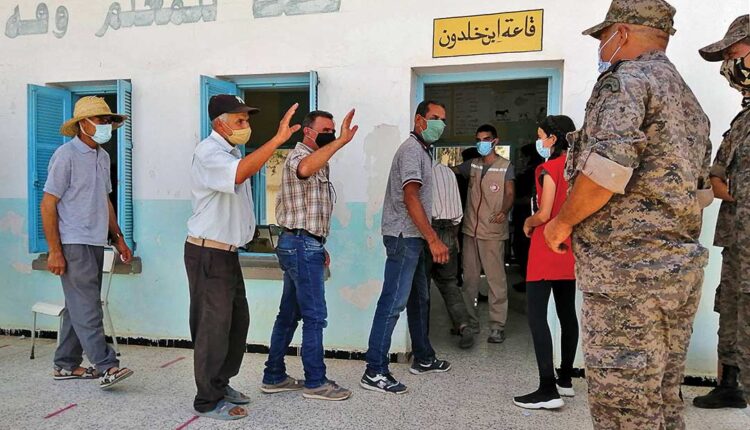 Soldiers in the Tunisian Army were in the village of Kesra in July 2021, taking on duties that once seemed unimaginable. At the village’s health center, Soldiers armed with rifles stood guard outside, while military medics administered COVID-19 vaccines inside.

Tunisia was facing its worst COVID-19 surge since the pandemic began more than a year earlier, and the government ordered the military to help lead the response.

Military health workers vaccinated thousands of people in Kesra and other villages in the central part of the country. Tunisian President Kais Saied said he would send military helicopters to the mountain regions to deliver vaccines to remote villages.

Kesra resident Rafika Achour said she was summoned twice to get a vaccine but had refused. But the reputation of Tunisia’s Soldiers changed her mind.

“When I heard of the arrival of the army, I decided to come for the vaccine because … for me, [the army] is more honest than others,” Achour told The Associated Press.

Tunisia did more than just send Soldiers to help with vaccinations. The president, frustrated with the lack of progress in his country’s fight with the virus, announced in July 2021 that he was turning over management of the COVID-19 health crisis to his military health department.

Other African countries also have called on their military medical corps to help in the pandemic fight. South Africa deployed more than 70,000 troops at the beginning of the outbreak in 2020 to enforce its lockdown. Since then, the country has sent military medical personnel to hospitals in its Gauteng region, the commercial heart of the country, to help them cope with soaring numbers of COVID-19 cases.

Now, more than a year after the initial COVID-19 shutdowns, African leaders are looking at how things went, hoping to learn from this unique experience.

When COVID-19 reached Africa in early 2020, leaders in many countries imposed lockdowns, trying to keep people at home instead of interacting with others and spreading the disease. When citizens resisted the lockdowns, Soldiers were sent into the field to take charge. In some cases, that did not work as planned, with troops in countries such as Kenya, Nigeria and South Africa accused of overreacting to protests.

There can be little doubt that the army-enforced lockdowns were necessary. In the case of South Africa, President Cyril Ramaphosa had the choice of slowing the spread of the virus with a lockdown or risk pushing an already weakened health care system to its breaking point.

“Faced with this choice,” the Journal of the Law and Biosciences reported in July 2020, Ramaphosa’s “decision to lock down the country cannot be criticized and may prove decisive in containing and slowing down the spread of the virus.”

South Africa had time to prepare its pandemic response. It took weeks for the disease to reach its borders. The country, based on what it had learned from similar crises around the world, knew the importance of drawing up a response. But its reaction was late.

In the journal’s July 2020 report, “Between a rock and a hard place: COVID-19 and South Africa’s response,” researchers said: “Considering the time it took to reach its borders, South Africa had time to prepare a COVID-19 response and draw on the importance of its community-informed response to other epidemics. However, despite the impact that these regulations were going to have on civil society, the lack of public deliberation and community engagement in developing these regulations is concerning.”

There was inadequate buy-in from the public, leading to protests and violence. A major lesson any country can learn from the COVID-19 pandemic is that it’s never too early to get the public involved.

South Africa, like other countries, knew it had to enforce restrictions on movement and other activities and knew people would resist these regulations. But experts believe not enough was done to educate the public about what was to come and to solicit public input on what they needed to stay afloat economically during the lockdown. South Africa’s “militarized” response resulted in eight deaths at police hands during the first week of the lockdown and unfortunate scenes like an entire wedding party being arrested.

“The South African government’s response is characterized by an overreliance on and faith in the power of the criminal law,” the researchers reported. “This militarized response was very evident, with President Ramaphosa appearing in military fatigues on the night the lockdown started. Failure to comply with some of the lockdown restrictions may result in imprisonment of up to 6 months, a fine, or both.”

With the pandemic, nonmandatory training for the military came to a halt and had yet to fully resume as of mid-2021. For instance, the U.S. Department of State’s International Military Education and Training program trains thousands of people, military and civilian, in a wide range of topics, from higher education for senior military officers to first-aid and rescue techniques for enlisted personnel. In 2019, the program trained 5,181 foreign students from 153 countries, with most of them being trained in their home countries. Only a few traveled to the United States.

COVID-19 did not shut down the program, but it stopped U.S. personnel from traveling overseas to teach on-site. Without online learning facilities in place, such as video conferencing, career enhancement training within Africa’s militaries became impractical. Military leaders learned the hard way that they have to rely more on video conferencing for classroom training in the future.

Such training requires access to a stable internet connection, a reliable electricity supply, computers and a knowledge of how to operate the systems.

That said, as in almost all types of education, video conferencing will never entirely replace in-person classrooms.

“Traditionally the African market favors classroom-based learning, and this allows for discussions and problem-solving as a group — scenario-based learning is always highlighted as a key benefit,” the International Security Journal reported. “Being able to resolve set tasks brings the theory to life and enables the tutor to stretch the minds of the learners and get them to move away from the outmoded thought of security being ‘gates, guards and guns.’”

Many military organizations have a means of soliciting feedback, including complaints, from the public. The South African National Defence Force (SANDF) established the Office of the South African Military Ombud in 2012 to deal with grievances from current and former members of the defense force. The office also investigates complaints from the public regarding the military.

Almost from the start of the COVID-19 lockdown, African News Agency reported, citizens began complaining to the ombud’s office about excessive force and physical abuse by SANDF Soldiers. South Africa’s Daily Maverick reported that by June 2020, the ombud’s office had received 32 complaints about the conduct of Soldiers during lockdown, including the death of a 40-year-old Alexandra man whom Soldiers had accused of drinking in public.

Until the lockdown, the ombud office had dealt mainly with complaints from its own Soldiers. It has since proved to be a valuable safety valve in giving the public a means of airing grievances.

Of the seven continents, Africa has the most countries, 54 in all. Historically, border cooperation among the countries has not been strong. The pandemic forced each country to rethink its border security to slow the movement of the virus. African nations have had to adopt a balancing act, keeping the virus out while allowing border movements and trade.

A typical result of the off-and-on policy shifts came in July 2021 when Senegalese President Macky Sall threatened to close his country’s borders and reimpose a state of emergency after the country registered a record number of daily COVID-19 cases for the third time in a week.

“I would like to say very clearly that if the numbers continue to rise, I will take all necessary measures, including if it means returning to a state of emergency or closing the borders or banning movements,” Sall said in a televised address.

A lack of coordinated border security policies is not a new thing for African countries. In his December 2020 study, “Securing and stabilising borders in North and West Africa,” author Matt Herbert said countries needed to “emphasise coordination, remove conflicts in roles and mandates, and develop a holistic understanding of the border security mission, its challenges, and the role of positive engagement with border communities.”

Herbert, writing for the Institute for Security Studies, made several recommendations. One in particular: Minimize the military’s role in border security in favor of law enforcement units.

Take into account the impact of neighboring countries’ security approaches on each other’s borders.

Develop initiatives that are not only focused on security but also on sustainable development.

Emphasize regional reform, either as part of centrally designed initiatives or by means of concurrent programs.

Emphasize coordination, remove conflicts in roles and mandates, and develop a holistic understanding of the border security mission, its challenges, and the role of positive engagement with border communities.

“Military units can play a beneficial role in countering cross-border violence and transnational terrorism, but their utility against smuggling and criminality is more dubious,” Herbert concluded. “The risk of a long-term confusion of civil-military roles probably outweighs the short-term benefits to the operational effectiveness of border security systems.”