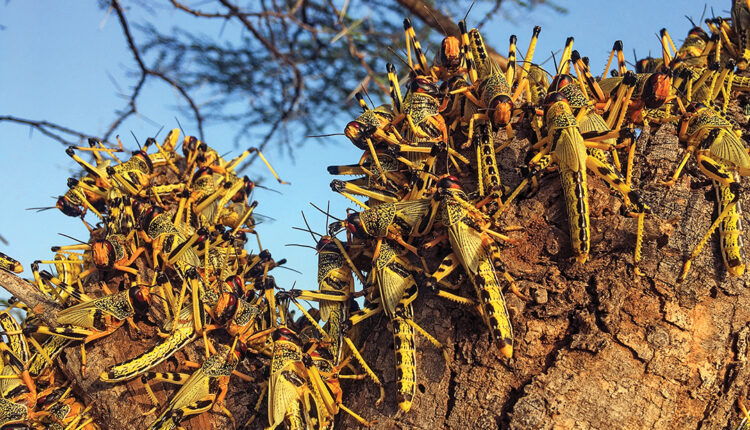 In 2020, John Oroko of Kenya witnessed the devastation wrought by desert locusts. It was a call to action.

“It is nothing short of a catastrophe,” Oroko told ADF. “I shudder to think what it means for the livelihoods of already-vulnerable communities on this continent.”

The worst locust invasion in 70 years has threatened the food supplies of East Africa, where millions already were going hungry. By mid-April 2020, more than 25 million hectares of farmland were under locust attack across the Horn of Africa.

That sparked the idea for Kuzi.

The free app uses satellite and soil sensor data, ground meteorological observation and machine learning to predict the breeding, occurrence and migration routes of desert locusts. It generates a real-time locust breeding index and a live heatmap of locusts in the region with potential migration routes.

Its name is Swahili for the wattled starling, a bird known in East and Southern Africa for eating locusts.

Kuzi uses deep learning — an element of AI that emulates the human brain to process data into patterns for decision-making — to identify the formation of locust swarms. The app then sends free text alerts to farmers and pastoralists two to three months before locusts are expected to attack farms and livestock, allowing for early intervention.

Ethiopia Works to Save Endangered Coffee