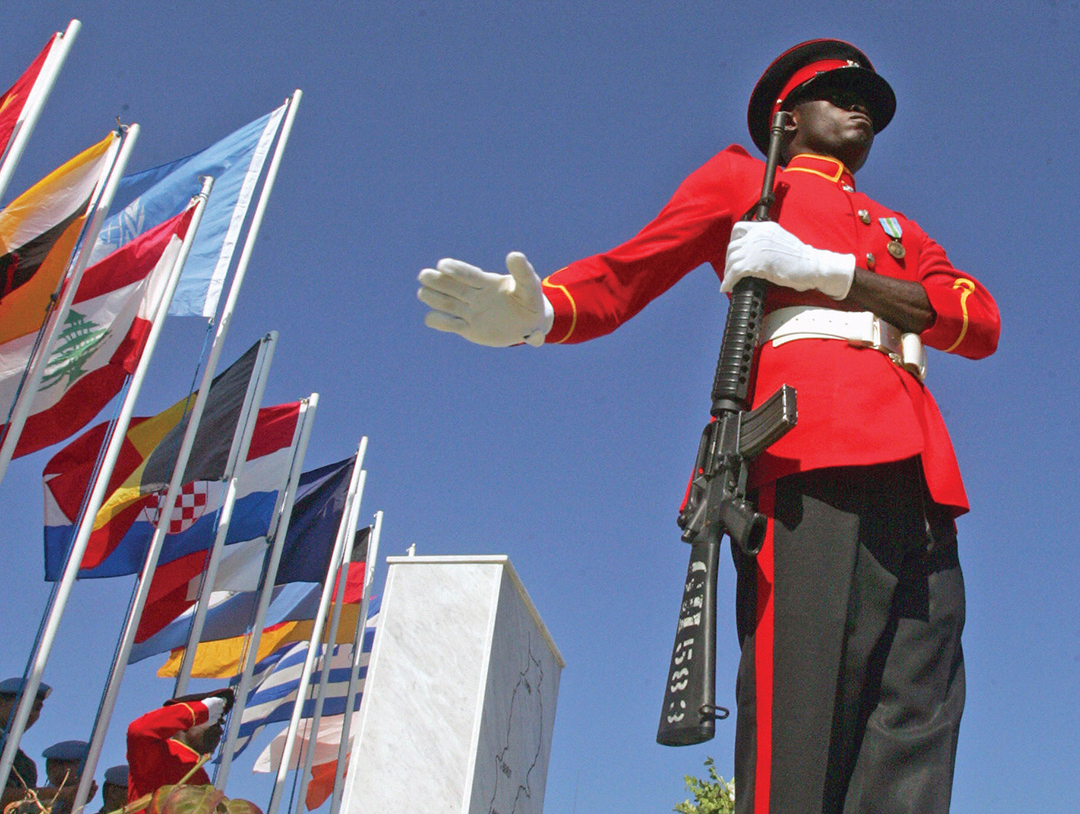 In Multinational Missions, Preparation and Discipline Are Key

Military professionalism has three main characteristics: responsibility, corporate unity and expertise, according to Samuel Huntington in his book, The Soldier and the State. These should be at the core of all military functions. Their importance in peacekeeping dates back to 1948 when the military played a central role in the United Nations Truce Supervision Organization in the Middle East, the first modern peacekeeping mission. Today, the U.N. leads 16 peacekeeping operations worldwide. All depend on the efforts of professional Soldiers.

The military typically is deployed as the immediate stabilizing force in conflict areas so the peace process can begin. To accomplish its mission, the military component relies on commanders, individual expertise and the force working together as an entity.

Liberia and Lebanon: Lessons from the Field
The two peacekeeping missions with which I am most familiar are the U.N. Interim Force in Lebanon (UNIFIL), in which I served as commander of the Ghana Battalion from 2006 to 2007, and the Economic Community of West African States Monitoring Group (ECOMOG) Mission in Liberia, in which I served in 1990. UNIFIL was established in 1978 to ensure the withdrawal of Israeli forces from Lebanese territory. In 2006, fighting resumed in Lebanon, leading to a 33-day war. The Security Council passed Resolution 1701 to strengthen the UNIFIL mandate with additional troops and robust rules of engagement.

Liberia, on the other hand, dissolved into a bloody civil war after Charles Taylor led the National Patriotic Front of Liberia in a December 1989 invasion. A number of West African nations played roles in the conflict and, in the absence of U.N. action, the Economic Community of West African States (ECOWAS) intervened in August 1990 with ECOMOG. The country relapsed into a civil war after an ECOWAS-organized election, due to Taylor’s bad governance and inadequate post-conflict arrangements. Consequently, the U.N. Mission in Liberia was established in 2003 to keep the peace. Nearly 150,000 people died in the civil war, according to the U.N.

Military leaders have learned a number of lessons on professionalism and operations as a result of the deployment of troops in these two countries under various peace initiatives.

Planning is essential: Inadequate planning can seriously affect the professionalism of peacekeepers. This was evident in Liberia where, because of a rushed deployment, commanders and troops lacked information on the warring factions necessary to prepare for the mission. When the ECOWAS operation was transformed into a peace enforcement mission, Soldiers were not prepared psychologically to confront rebellious factions. They had no idea of the capability, equipment and strength of the rebel groups in Liberia. Many also lacked the necessary background on the ethnic, economic and political factors fueling the conflict. As a combatant myself, I saw that troops were ill-equipped to carry out their new role of peace enforcement. This led to a number of deaths at the initial stages of deployment and almost shook the professional foundation of the multinational force. The lesson is that a thorough knowledge of the dynamics and root causes of the conflict can help prepare troops psychologically for peace operations.

Discipline must be enforced: Some contingents of multinational forces have bluntly refused to obey commands to undertake operations until they receive clearance from their home governments. Such unprofessional behavior has been observed in Lebanon and Liberia, although the operations are conducted under a unified international command. In Liberia, some individual combatants refused to participate in operations out of fear. Although they were severely disciplined by their various contingents, the clear lesson here is that troops should be prepared psychologically to operate under any condition and that military professionalism thrives on obeying orders and strict discipline. This is a challenge that seems to be increasing with the new generation of military personnel and peacekeepers. Some troops have become less willing to endure personal inconvenience and have become more concerned with remuneration than with the values of their profession. This makes the Soldier think of his or her profession as just a job, rather than a lifetime career. There have been increasing cases of unprofessionalism reported in a number of missions requiring commanders to isolate and discipline individuals.

Respect local culture: Gross negligence of or lack of understanding of cultural practices has serious consequences for peacekeepers. In Lebanon, for instance, religious sensitivity dictates that no male should have any direct communication or contact with a female in public. Women are generally regarded with extreme dignity in that part of the world. Also, open drinking or selling of alcohol in southern Lebanon is forbidden, according to Islamic tradition. There have been some isolated incidents in Lebanon in which peacekeepers have violated these cultural practices, resulting in retaliatory threats or attacks by militia groups. Although some of these situations have been resolved through dialogue and negotiations, this is a potentially explosive area that can restrict the operations of peacekeepers and affect professionalism and discipline. The solution is to educate peacekeepers on cultural norms and practices before they are deployed. Disregard for the cultural practices of the people will generate hostility. In peacekeeping, understanding and coping with the sensitivities of the people should be a key measure of the professionalism of peacekeepers.

Equipment must match the mandate: A major lesson learned in the ECOWAS operation in Liberia relates to the irregular shifting of it to confront the threat of the warring forces at various times. A series of rebel attacks in 1990, including two assaults on the ECOMOG headquarters and the detainment of a platoon of peacekeepers by a rebel group, forced ECOWAS to change from traditional peacekeeping to peace enforcement operations. The multinational peacekeepers did not have the numbers and equipment to engage rebels in battle. The timely arrival of reinforcements from Nigeria and Ghana helped save the situation. Nigeria increased the firepower of the force with reinforced mechanized battalions and armor and artillery regiments. Similarly, in Lebanon, only two lightly equipped formed battalions (Ghana and India) with combat and support units from other multinational forces were effectively deployed in the operational sectors at the outbreak of the 33-day war in July 2006. UNIFIL, therefore, was unable to prevent incursions and attacks from both sides, although the force was responsible for patrolling southern Lebanon. Professionally, UNIFIL was ineffective in the midst of the confrontation except to assist in humanitarian activities. To cure the situation, the Security Council quickly passed Resolution 1701 for the cessation of hostilities and increased the size of the force with a robust mandate. The result was the deployment of well-equipped additional forces. In both scenarios, it’s clear that peacekeepers must be well-equipped to fulfill their mandate as professionals from the start. Without the requisite numbers of troops and equipment to match, peacekeepers will be undermined by serious challenges.

Guiding Principles
Modern peace operations require a high level of discipline, professionalism and ethical comportment. Without these guiding principles, most peace operations will face serious setbacks and fail to enforce mission mandates. Military discipline is achieved through training, which develops self-control, strong character, and efficiency for the individual and the unit. Well-trained Soldiers understand the importance of subjection to control for the good of the group. Discipline is a prime differentiator between rebel forces and a regular military force, and its importance cannot be overstated. It is a behavior that is formed by proper training to ensure compliance with rules by individuals or groups and to create a cohesive military suited for modern multidimensional peace operations.

Conclusion: Maintaining Military Professionalism in Peace Operations
It is important for peacekeepers to be educated thoroughly on how bad behaviors and practices can affect peace operations. As practiced by some contingents, peacekeepers who break the rules are repatriated to their home countries to face discipline. Such personnel can be tried by disciplinary boards in the mission area and, if found guilty, repatriated immediately to serve sentences at home. This measure deters others from disobeying rules. The Ghana Battalions deployed in missions throughout the world have adopted such a measure to maintain discipline and professionalism among its peacekeepers. As a commanding officer with UNIFIL, I was faced with similar challenges, and my battalion adopted this strategy. Overcoming indiscipline among peacekeepers will help raise the standard of professionalism in modern peace operations.

It is vital that policymakers and military commanders understand the background of specific conflicts before deploying peacekeepers. Without this understanding, peacekeepers are bound to encounter challenges. The U.N., continental and regional organizations may be required to adopt measures for policymakers and commanders of troop-contributing countries to make a conscious effort to understand the background and history of the conflicts before deploying peacekeepers. Without the proper understanding of the dynamics of the conflict, there cannot be thorough preparations for any intervening military force in any peace operation. When troops are ill-prepared and lack the necessary equipment to match the feuding parties in a conflict, it could affect their professionalism. A thorough analysis of the concept of operations by policymakers will help to assess the appropriate type of force and equipment that peacekeepers require for the operations.

Well-coordinated training for peacekeepers is an essential element for maintaining and improving professionalism among multinational forces. Modern peacekeeping has taken on a multidimensional approach, which has made peace operations more complex. To maintain a high professional standard among peacekeepers, adequate training in the multidimensional approach is required for personnel before they are deployed. This includes guidance on cultural issues, civil-military engagement and psychological preparation for the peacekeeping environment. The training for integrated peace missions for U.N. operations is supposed to be coordinated by the U.N. Integrated Training Service (ITS). However, numerous other institutions have emerged without the recognition of the ITS and are using different methods and teaching different doctrines. The result is a wide disparity in training and preparedness among multinational forces. Better-coordinated training in modern peace operations under the recognition of the ITS would help boost and maintain professionalism.

The professionalism of military personnel deployed for modern peace operations plays an essential role in the success of such missions. The guiding principle should be to provide good leadership to ensure that discipline is maintained at the highest level to enable peacekeepers to perform optimally. Discipline is the bedrock of military profession. Training also is an important ingredient. Without the appropriate training, accompanied by the requisite logistics, peacekeepers do not have the tools they need to do their jobs. Studying valuable lessons from past missions can help peacekeepers attain a higher level of professionalism in the future. 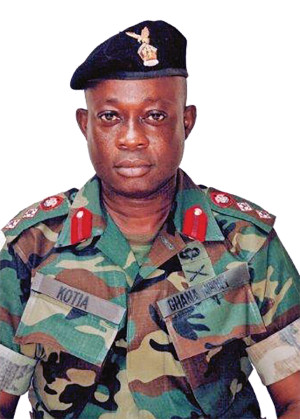 From 2006 to 2007, Col. Emmanuel Kotia of the Ghana Armed Forces was the commanding officer of the Ghana Battalion with the U.N. Interim Force in Lebanon. He also has served in peacekeeping missions in Cambodia, the Democratic Republic of the Congo, Liberia, Rwanda and Western Sahara. He is academic programs coordinator and chief instructor at the Kofi Annan International Peacekeeping Training Centre in Accra. He teaches at the Ghana Armed Forces Command and Staff College’s Master of Science program in Defence and International Politics, and he is a visiting professor at Kennesaw State University in the United States and the University of Bedfordshire in the United Kingdom. His book, Ghana Armed Forces in Lebanon and Liberia Peace Operations, was published in April 2015 by Lexington Books.

A Legacy of Service

The Profession of Arms